Speaking as a Chief Guest at the “Start-up India-2022 Expo & Conclave” organised by PHD Chamber of Commerce here, Dr Jitendra Singh said, because of the impetus given by Prime Minister Narendra Modi which began with his call for “StartUp India StandUp India” from the ramparts of Red Fort on Independence Day, the number of StartUps in India has grown to 70,000 from about 300 to 400 in 8 years from 2014 to 2022.

The Minister said, India has the world’s third largest ecosystem in this area and in just eight to ten days a start-up takes the shape of a unicorn. He added that after a whopping 44 unicorns in 2021, the milestone of 100 unicorns was achieved a few days ago with a valuation Rs 25 lakh crore. The Minister reminded the audience that India’s unicorns have a faster average growth rate than the likes of the US, UK, Germany and others.

Dr Jitendra Singh underlined the need for sustaining the start-up movement and urged the industry to become equal stakeholder in the rapidly rising sector. The Minister also laid stress on integration of start-up, research, academia, and industry for a win-win proposition for all.

Dr Jitendra Singh advised the budding StartUp entrepreneurs to look beyond the IT, Computer and Communications sectors to the most unexplored and the richest farm sector, which is awaiting a huge Tech revolution after the Green revolution. Calling for promoting Agri-tech start-ups in a big way, the Minister said, Agriculture is one of the important pillars of the Indian economy as 54 percent of the Indian population depends directly on agriculture and it accounts for around 20 percent of GDP. He said, the success story of CSIR promoted Aroma Mission of Lavender cultivation in Jammu and Kashmir needs to be replicated in other states in other suitable crops and vegetation and particularly in the bamboo sector.

Dr Jitendra Singh said, ‘Kisan Drones’ should be adopted in a big way for promoting crop assessment, digitisation of land records, spraying of insecticides, and nutrients and pointed out that countries like Israel, China and the US have transformed several agriculture practices in their country with the use of technology. 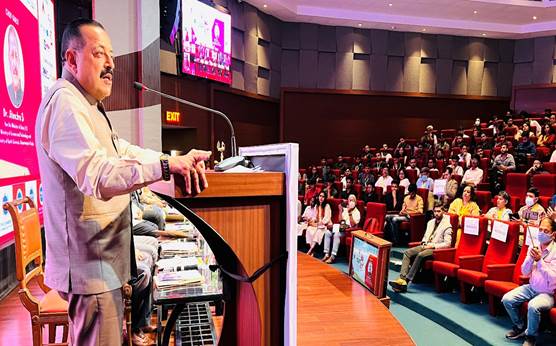 Similarly, Dr Jitendra Singh lamented that Dairy sector in India needs more and more Amul type of success stories and called for innovative Start-ups to take a lead and make India as the largest exporter of milk products. He said, Australia has the biggest StartUp projects in the Dairy sector and Indian entrepreneurs should learn and incubate innovative practices.

Dr Jitendra Singh informed that after the unlocking of the Indian Space sector in the recent past by the Modi government, 60 start-ups registered with ISRO having proposals varying from nano-satellite, launch vehicle, debris management to ground systems and research.

Dr Jitendra Singh said, ever since PM Modi had announced “Start-Up India, Stand-Up India” from the ramparts of Red Fort in his Independence Day address of 2015, it picked up in a big way in across the country and now there are multiple efforts from the government’s end to push for more start-ups to come from Tier 2 and Tier 3 cities. The Minister said, this is also a recognition of liberation of youth from the “SarkariNaukri” mind-set and added that Government is working hard to provide an enabling environment for rural and semi-urban enterprises.

In conclusion, Dr Jitendra Singh promised complete financial, technical support from the Science and Technology Ministry to the budding and promising start-ups in Bio-tech, Dairy and Agri-tech sectors. He also promised help in product development and marketing and sale of products for providing gainful employment to the youth in the country.

Filmmaking should be easy, so that the dreams of youngsters come alive – Prasoon Joshi