The Story of the First Flag of Independent India; Its rightful place is at Netaji Museum Katak

Bhubaneswar: The First flag of Independent India was hoisted by Colonel Shaukat Malik of the Indian National Army at Moirang near Imphal on 14 April 1944. The flag has been in the possession of Y.A.Sishak at Ukhrul in Manipur, kept in a steel trunk and taken out only on the INA memorial days.

The story of the Moirang Flag and how it came to Sishak’s possession is an interesting saga of the INA. Netaji’s soldiers of the INA’s Special Groups had entered Manipur along with Japanese forces in mid-March 1944. The Japanese offensive towards Imphal began on March 8 1944 with 33rd, 15th and 31st Divisions in an encircling movement toward the Manipur basin. On 29 March, Japanese troops occupied the road due north of Imphal, cutting off the Imphal valley from Kohima and the rest of India. Two days later, they captured Nappen Hill, gaining a foothold on the Shenam Saddle.The INA’s Bahadur Group, headed by Shaukat Ali, acted as scouts and pathfinders to the advancing Japanese units in the opening stages of the Imphal offensive. Some 7,000 men from the INA’s 1st Division had participated in the Battle of Imphal. 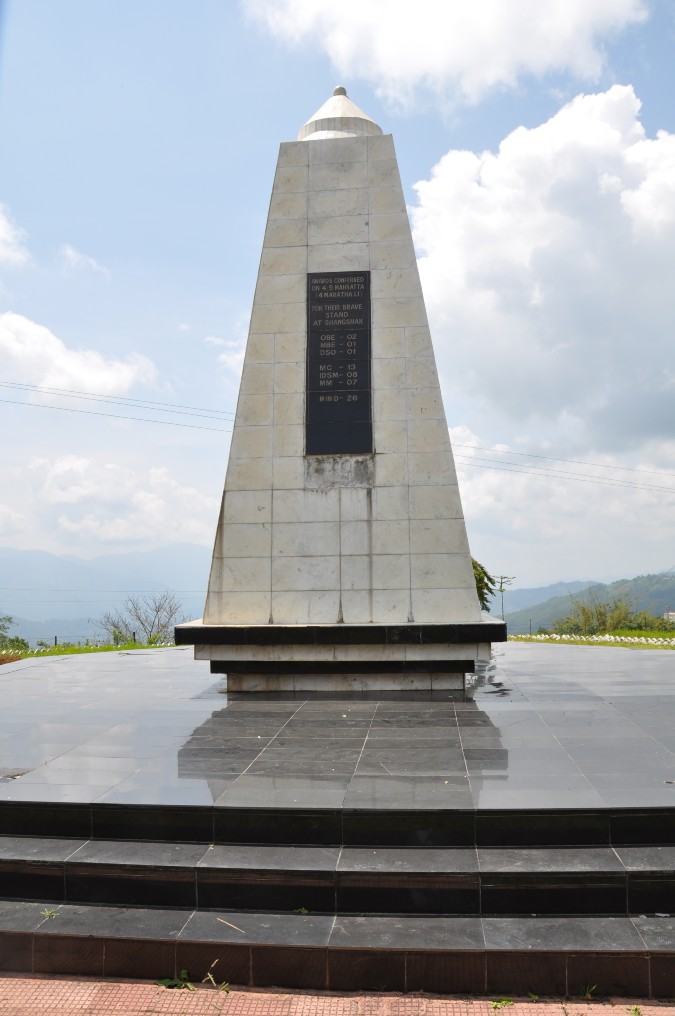 A small unit of the INA had sneaked through and planted the flag at Moirang. In “A biography of Subhas Bose – The Last Hero” (1982), Mihir Bose described: “The Japanese on their eagerness to claim victory with the fall of Imphal released one photograph on April 29 1944, which showed a group of INA soldiers entering a Manipur village carrying a photograph of Netaji and being enthusiastically greeted by villagers.”

I visited the INA Museum at Moirang. It was a rather pathetic representation of the INA. There was no photograph of the flag hoisting or how long the flag had been flying. However, I could trace out one witness from the day who told me about Y.A.Sishak. I was informed that he was in possession of the first flag, the very flag that had been raised at Moirang. My search took me to Ukhrul, 80 kms from Imphal.

I reached Ukhrul and was directed to Shishak’s house up on the hill. The little wooden structure had remnants of the great war strewed all over the lawn. There was a big barreled field gun just near the gate. He came out of his small house on seeing me; the old soldier gave me a Jai Hind salute. He took me inside; his small house was filled with war memorabilia. There were samurai swords, helmets and many photographs lined the walls.

I impatiently asked him about the flag. He went inside his house, asking me to follow him. He asked me to bring down the top trunk from a piled up stack. He opened the trunk, and there, carefully wrapped in newspapers, was the first free flag of India. My search was over; I had found Netaji’s flag in a remote village in one corner of India.

On my insistence, Shishak set up the flag in his front room and told me the story of the flag. When the INA group sneaked into Moirang, they found no opposition. Col. Malik informed Netaji about their success over the Radio and was instructed to hoist the INA flag. They then discovered that there was no flag with them. Malik hurriedly asked his men to make one. The first Flag is a rather crude representation of the INA’s tricolor with the Springing Tiger, which looks more like a schoolboy’s drawing of a fat cat. Even the direction of the tiger was wrong; the INA Flag had the tiger springing from the right to the left, in the flag it was shown in the opposite direction. Shishak told me that he was with the Japanese group, who were using him as a carrier boy. He had not been present when the flag was raised, but had arrived later in the day. He remembers the flag being photographed both by the Japanese and the INA soldiers, but no photo exists. He recollects that the Indians were very enthused and cheered and danced around the flag. At sundown the flag was lowered and given to a local school teacher, who promised to raise it every day.

However the flag was stolen by a village chieftain, who used it at times as a headdress on ceremonial occasions. Shishak showed me a photograph of the old chief. It was only years later, that Shishak would cajole the Chief to give over the Flag to him. That Shishak owned the flag was only first reported by a local newspaper in 1985. Since then, many have approached him for the flag, but he zealously guards it and only shows it to the few people who can make their way to his small village up in the hills.

Shishak plans to set up a museum in Shashank. Along with the flag, he has hundreds of knick knacks which include uniforms, shells, helmets, uniforms, samurai swords, maps and papers, field guns and photographs. However Shishak is still not recognised as a freedom fighter. He showed me his passport, which proved that he had made two trips to Japan where he was honoured for his war efforts, but the Government of India still does not recognise him as a freedom fighter. ‘I was just a fourteen year old boy when I fought for Netaji, but the Commissioner at Ukhrul is not sending my file to Delhi with his recommendation,’ he rued bitterly.

Shishak showed me the trenches which had yielded up many relics of the war recently. I plunged into one, scraping the ground with the hope of finding a used bullet shell. He showed me rocks which had samurai swords and Japanese letters carved on them.

I have repeatedly written to the Government of India and the Odisha Government asking them to get the flag from Shishak and display it either at the INA Museum at Seelamgarh Fort in Delhi or at the Netaji Birthplace at Cuttack. I have visited him twice in the last few years, I am sure he can be coaxed to part with his flag. Until then, this little piece of history lies locked up in a steel trunk in the small village in Manipur.

Climate Change Policies Must be Equitable and Pragmatic: Gautam Adani