New Delhi : Prime Minister Narendra Modi and the Union Home and Cooperation Minister Shri Amit Shah participated in the Golden Jubilee celebrations of the North-East Council, in Shillong in Meghalaya today. On this occasion, many dignitaries including Governor of Meghalya, Governor Brig. (Dr) B. D. Mishra, Chief Minister of Meghalya Conrad Sangma and Chief Ministers of other North-Eastern States were present. The Union Home and Cooperation Minister said earlier the development of North-East region was stuck due to the limited budget allocated to the North-East Council, but the Prime Minister has given a new shape and provided a new dimension to the infrastructure of the North-East by initiating large projects at the Central level. Due to improved infrastructure, the possibilities of tourism have increased in the North-East, as also many small industries, educational institutions and sports-related institutions have also opened. He said the Prime Minister has also taken up the project of connecting every capital of the North-Eastern States by road, train and through air connectivity.

Union Minister Shri Amit Shah said that due to the leadership of the Prime Minister, the North-East is now free from all disputes and peace has been established in the region. Till eight years ago, the entire North-East was only known for bandhs, strikes, bomb blasts and firings, and the people of North-East could not live peacefully due to the activities of different militant groups. In the past eight years there has been a 74% reduction in insurgency incidents, 60% reduction in incidents of attacks on security forces and 89% reduction in civilian deaths, while about 8,000 youth have surrendered and joined the mainstream. Shri Shah said that these are great achievements made possible due to the leadership of Prime Minister Narendra Modi because without peace it is impossible to develop institutions of development, education and health.

Shri Amit Shah said during the tenure of Prime Minister Narendra Modi, the agreement with the NLFT in 2019, the Bru and Bodo Agreement in 2020, and Karbi Agreement in 2021 were agreed upon. The Assam-Meghalaya and Assam-Arunachal border disputes have also almost ended, and due to the restoration of peace, the North-East region has moved on the path of development. The biggest example of this is earlier there used to be a demand to remove AFSPA from the North-East, but now the demand does not arise, rather the Government of India is taking steps and initiatives to remove AFSPA. He said that now 60% area of Assam, seven districts of Nagaland, 15 police stations in six districts of Manipur and Tripura and Meghalaya have become completely AFSPA free, while in only one district in Arunachal AFSPA is yet to be lifted. 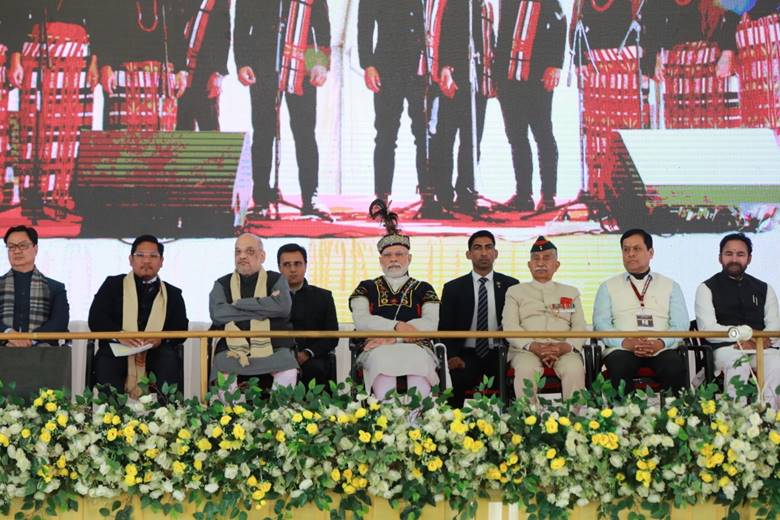 The Union Home Minister expressed confidence that the NEC and the Chief Ministers of the North-Eastern States will work with comolete determination to fulfill the goals set for the NEC by Prime Minister Modi to help develop the region and help create a developed, peaceful, employment-rich North East like other regions of the country.