New Delhi :  The President of India, Ram Nath Kovind felicitated the winners of the 3rd National Water Awards instituted by the Department of Water Resources, River Development and Ganga Rejuvenation, Ministry of Jal Shakti and launched the Jal Shakti Abhiyan: Catch the Rain campaign 2022 today at Vigyan Bhawan, New Delhi. The First Information Brochure of the 7th edition of India’s International Water Resources Event India Water Week -2022, planned to be organized from 1-5 November, 2022 at India Expo Centre, Greater Noida, was also released today by the Union Minister for Jal Shakti, Shri Gajendra Singh Shekhawat along with Ministers’ of State for Jal Shakti Shri Bishweswar Tudu and Shri Prahalad Singh Patel, and Secretaries from both the departments.

Addressing the gathering, the President of India Shri Ram Nath Kovind said that it will be right to say that Water is Life (Jal Hi Jeevan Hai) and that nature has given us water resources like rivers etc. However, unfortunately we now feel separated from the nature that sustains us. The traditional water conservation structures are vanishing due to urbanization and the challenge of water management is being talked about scientifically today. He emphasized on the fact that India traditionally reveres its rivers and it is very important to achieve water security.

The President further said that we all recognize the importance of water for lives, livelihoods and development. Water scarcity, floods and droughts have the greatest impact on the lives of the poorest and the most vulnerable. The availability of water resources is finite and dependent on the rains. Climate change, which is manifesting itself in the form of changes in the water cycle, also threatens our water security. About 3-4 decades ago, there was no need to buy water. Today, we hear of water riots in some parts. In India, the situation is particularly challenging as India is home to about 18% of the world’s population but we have just 4% of the fresh water resources of the world. It is also said that the next War would be on water. In this backdrop, he added, “all of us will have to be alert and ready. I am happy to note that the Ministry of Jal Shakti is taking steps to address the issues in the water sector”.

In May 2019, the Ministry of Jal Shakti was created after the merger of erstwhile Department of Water Resources, River Development and Ganga Rejuvenation and Department of Drinking Water and Sanitation. This was done to address the water related issues on priority. I am happy that to mitigate climate change, several actions including river rejuvenation, giving priority to water security, completing irrigation projects, and rehabilitating dams etc. are being taken.

To transform Jal Andolan into a Jan Andolan, Jal Shakti Abhiyan and Jal Jeevan Mission were launched in 2019 in which several recharge structures were made and crores of people joined-in. On 22nd March 2022, the Prime Minister of India launched the “Catch the Rain, where it falls, when it falls” campaign. I am happy to launch the Jal Shakti Abhiyan: Catch the Rain 2022 for the period 29 March, 2022 to 30 November, 2022. I am also happy to note that   spring shed development, protection of water catchment areas, gender mainstreaming in water sector are some of the new features added to the campaign. I am sure that gender mainstreaming will deﬁnitely promote the role of women in water governance / conservation & management.

Kovind added “I expect that the State Governments are geared up even more this year to take up the campaign with zeal and enthusiasm which will go a long way in tackling the problem of water scarcity in the country. I would also like to congratulate the Ministry of Jal Shakti for having organised the National Water Awards, which is the most opportune and timely initiative to create a mass movement for effective water management. “

Ha further said “I am delighted to note that the Ministry of Jal Shakti is giving awards to States, Organizations, Individuals etc. in 11 different categories. Some of the winners have done exemplary work in the field of water management. It is in examples like these our hopes of a water secured future lies. I not only congratulate all the winners but also request them to continue being the motivation for all of us. I strongly believe that these Awards will usher-in a water consciousness in the minds of people of India and will help in bringing a behavioral change. On the occasion of Azadi Ka Amrit Mahotsav, I congratulate all who have taken part in these initiatives once again”.

Giving the welcome address, the Union Minister for Jal Shakti Shri Gajendra Singh Shekhawat thanked the President for breathing new energy to water conservation campaign. He congratulated all the winners including the top 3 States in Best State category for their work in the field of water management. Referring to Rig Veda, Shri Shekhawat said that India has traditionally respected water resources. He emphasized on the importance of rainwater harvesting in the backdrop of the fact that only 8% of rainwater is harvested in the country and said that it is because of this reason that Catch the Rain campaign was launched by the Prime Minister Shri Narendra Modi.

The Union Jal Shakti Minister informed the gathering that National Water Awards are being instituted since 2019 and thanked the work being done by various stakeholders in the direction of water management and inspiring others to do their bit. The need for a unified National Water Awards was felt to encourage the stakeholders and people adopt holistic approach towards water resources management. The Awards also strives to create awareness among the masses on the importance of water and motivate them to adopt best practices in effective water management. 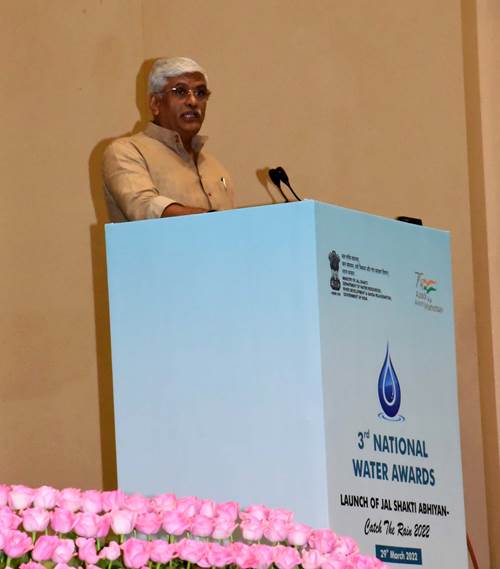 The first National Water Award was launched by the Jal Shakti Ministry in 2018. National Water Awards have provided a good opportunity to start-ups as well as leading organizations to engage and deliberate with senior policymakers on how to adopt the best water resources management practices in India.

The NWAs focuses on the good work and efforts made by individual and organisations across the country in attaining the government’s vision of a ‘Jal Samridh Bharat’. The Award also provides an occasion for all people and organisations to further cement a strong partnership and people engagement in water resources management activities.

After the successful implementation of Jal Shakti Abhiyan in 2019, which was a national call to action for water conservation and management and implemented in 1,592 water stressed blocks in 256 districts of the country, the Jal Shakti Abhiyan-II: Catch the Rain, where it Falls, When it Falls campaign was launched by the Prime Minister on the occasion of World Water Day on 22nd March 2021, which was taken up in all districts (rural as well as urban areas) of the country during the pre-monsoon and monsoon period, i.e. from March 2021 to 30 November 2021. The campaign evoked a very good response all over the country. Since the launch on 22 March 2021 till 31st December 2021, both urban and rural areas put together, a total of more than 46 lakh water related works completed/on-going in addition to more than 36 crore aﬀorestation works, 43,631 training programmes/kisan melas were held and 306 Jal Shakti Kendras had been established. The expenditure under MGNREGS alone is more than Rs 65000 crore. In addition to water conservation related works, use of remote sensing satellite images and GIS mapping technology for identiﬁcation of existing water bodies/structures was done to create an inventory of water bodies.

In Jal Shakti Abhiyan: Catch the Rain 2022, some new features which have been added are spring shed development, protection of water catchment areas, gender mainstreaming in water sector. Gender mainstreaming is expected to promote the role of women in water governance/conservation & management. The State Governments will accomplish the task of setting up of Jal Shakti Kendras in each district of their state which will act as knowledge center and will oﬀer a one stop solution to all water related problems/ issues and draw district water conservation plan as early as possible. If all water bodies in the country are enumerated under the campaign this year, it will be a major achievement.

All the Sarpanchs conducted the special Gram Sabhas during the launch of the campaign and administered the   Jal Shapath to the people in the village. Successful implementation of the “Jal Shakti Abhiyan: Catch the Rain” campaign relies on active participation of local community people at the grass root level where the local community people will be a “water warriors” to mitigate water scarcity issues through active participation in water conservation work and act as an owner to the water conservation structures assets. District Magistrate and Gram Sarpanchs will play crucial role in motivating the local populace as “Marg Darshak” for motivation and active participation of each individual in water conservation to ensure campaign’s success with fulfilling the desire of “Jan Shakti for Jal Shakti”.

The Curtain raiser of 7th edition of India’s International Water Resources Event India Water Week -2022, planned to be organized from 1-5 November, 2022 at India Expo Centre, Grater Noida, was also held today with the release of First Information Brochure. An introductory film on IWW-2022 indicating key features of India Water Week event was presented during the function. The 7th India Water Week-2022 brings together experts, planners, innovators and stakeholders across the globe, focusing on themes and Sub-themes of the conference. The theme of the 7th IWW is “Water Security for Sustainable Development with Equity”. The 5-day event hosts Conference with Seminars, Panel Discussions, Side events, Exhibitions and Cultural programme, besides providing opportunities to business to find prospective partners and customers. In addition, there will be special sessions on key schemes of ministries and departments, event by International organizations, session for young professionals, event for school children, event by NGOs/Success Stories etc. making the conference an inclusive platform for all the stakeholders working in the field water resources management.