‘Odisha to participate in World Food India as Focus State’, 350 companies from the state participating’

New Delhi: Odisha is participating as a ‘Focus State’ in the World Food India (WFI)-2017, being organized from 3rd–5th November, 2017 at New Delhi. As a ‘Focus State’, Odisha will be setting up its own pavilion with 12 stalls showcasing various processed food items from Odisha like spices, cashew, confectionary items, processed agro food, sea food, etc. Odisha Sea Food Exporters’ Association along with Directorate of Fisheries will showcase the potential in sea food sector. Similarly, Directorate of Horticulture and APICOL along with local industry partners will showcase the processed agro food items as well as spices that are produced in Odisha.
A Seminar on “Opportunities in Food Processing” in Odisha is also being organised during the event on the 3rd November, 2017 at Vigyan Bhawan. Besides, the Business Delegation going from the State will be having B2B meetings with investors and entrepreneurs from other states and countries. It may be mentioned that Japan, Denmark and Germany are ‘Partner Countries’ and Italy, Netherlands are ‘Focus Countries’ in WFI-2017. Besides, there are official and business delegations coming from countries including Poland, South Korea, Sri Lanka, UK, France, Netherlands, etc. 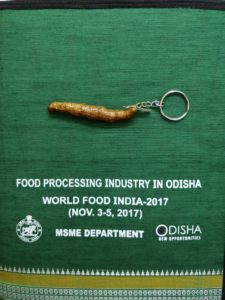 CM Naveen Patnaik to address the Odisha Investors Meet 2022 in Bengaluru, ahead of…