New Delhi : India achieved yet another milestone in context of IP innovation ecosystem, wherein for the first time in the last 11 years, the number of domestic patent filing has surpassed the number of international patent filing at Indian patent office in the Quarter Jan-Mar 2022 i.e. of the total 19796 patent applications filed, 10706 were filed by Indian applicants against 9090 by non-Indian applicants. This is represented as under:

The Union Minister of Commerce and Industry, Consumer Affairs, Public Distribution and Textiles, Shri Piyush Goyal appreciated the consistent efforts made by DPIIT on strengthening the IPR regime in India by fostering innovation, and reducing compliance burden. The coordinated effort by DPIIT and IP office has led to increased IP awareness among all strata of society. These efforts have on one hand led to increase in the number of IPR filings, on the other hand has reduced the pendency of patent application at IP offices. He also mentioned that this will take India a step closer to the India’s ambitious target of being in the top 25 nations of Global Innovation Index.

Some of the key initiatives taken by the Government over the years that has bolstered India’s IP regime includes fee concessions like 10% rebate on online filing, 80% fee concession for Start-ups, Small Entities and educational institutions, and provisions on expedited examination for Startups and MSMEs along with other categories
The cornerstone laid down by National IPR policy and the efforts made by the Government has transpired into the following achievements for India: 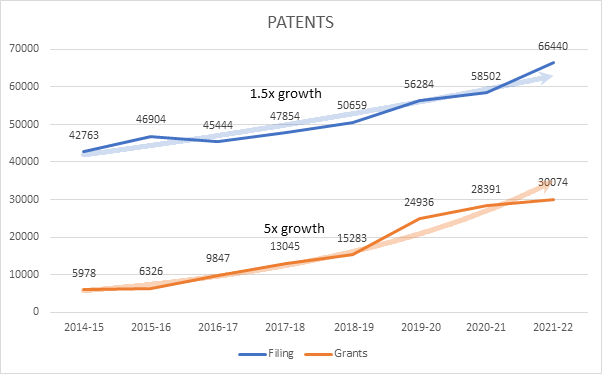