New Delhi : The first ever Global AYUSH Investment and Innovation Summit (GAIIS) at Gandhinagar concluded on a high note last night, with the AYUSH sector witnessing Letter of Intents (LoIs) of over Rs 9,000 crores.  The investment proposals have come across major categories like FMCG, Medical Value Travel (MVT) and services, pharmaceuticals, technology & diagnostics, and farmers & agriculture.

During the summit, more than 70 MoUs (Memorandum of Understanding) were signed between countries, prestigious research institutes, the farmers groups and industry.  Other than international exchanges, an MoU was signed between the Ministry of AYUSH and Ministry of Defence to start AYUSH facilities in over 35 cantonment areas across India.

Speaking at the valedictory function, Union Minister for AYUSH Sarbananda Sonowal said that the Summit has been instrumental in developing an enabling framework to attract investments in the sector. “The investors and the entrepreneurs of the whole world have realized the comparative advantages which AYUSH is offering, and its strengths” he added. Shri Sonowal further said the investment and innovation opportunities in the field of AYUSH are limitless. 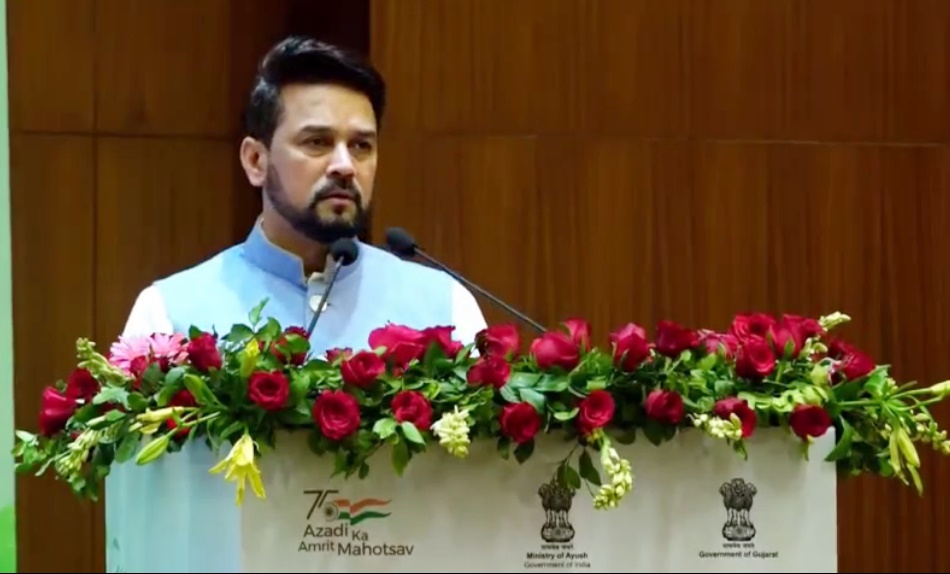 Also speaking on the occasion, Union Minister for Sport & Youth Affairs and Information & Broadcasting, Anurag Thakur said the market size of the AYUSH has witnessed a quantum jump from just over $3 billion in 2014 to $ 18 billion today, clocking a phenomenal annual growth of 75%.  The Minister expressed hope that the country will soon see many Start-ups and businesses investing in this sector.  To encourage competition, Shri Anurag Thakur said we need better packaging of our products and this should be complemented with aggressive marketing and branding.

The Minister further remarked that “The time has come for India to become Vishwa Guru in traditional medicine. We must work in the spirit of One Earth, One Health and promote Heal in India, making our country the hub of medical tourism”

The Governor of Gujarat Shri Acharya Devvrat was the Chief Guest at the valedictory session of the Summit. MoS for Tourism Shri Shripad Yesso Naik and MoS for AYUSH Dr. Mahendra Munjapara were also present during the function.

The Global Ayush investment and Innovation Summit, 2022 was a distinctive effort by the Government of India to attract the world’s attention to India’s ancient wisdom and traditional knowledge, and capitalize on it to pave the way for a sustainable future. The Summit was organized in line with Sustainable Development Goal Number 3 of promoting “Good Health and Well-being.”

The Summit wrapped up with a total of five plenary sessions, eight roundtables, six workshops, and two symposiums, all packed into a short time span of three days. The summit witnessed the presence of 90 eminent speakers and 100 exhibitors. It also saw participation of more than 30 FMCG companies including Amul, Dabur, Kama Ayurveda, Accord, AyurVAID, Natural Remedies, Ambro Pharma and Patanjali.