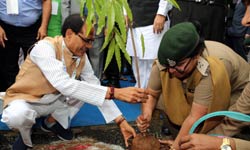 Bhopal: Chief Minister Shri Shivraj Singh Chouhan said that efforts made for environment conservation by linking people are successful. Plantation of 7 crore 14 lakh saplings is possible in a day, remarkable initiative for river conservation could be taken, if society decide so. Foundation of these remarkable successes are efforts made by the government by keeping society ahead. CM Shri Chouhan was addressing the inaugural session of National Conference in the auditorium of R.C.V.P. Noronha Administration and Management Academy here today. A two day National Conference 2017 on Environment is being organized by National Green Tribunal.

CM Shri Chouhan mentioned that environment conservation cannot be carried out by the government alone. Society’s participation is must. Plantation undertaken on July 2 is the clear evidence. Plantation was become a matter of pride as there was a celebratory atmosphere towards plantation on the banks of Narmada River . Nonparticipation in plantation was considered as a reason of public embarrassment. He further said that plantation work will be carried out constantly at different places every year. Madhya Pradesh has become the savior state for rivers owing to conservation of Narmada River. Works to conserve Tapti, Betwa and rivers like Kshipra will be undertaken from next year. Narmada is a lifeline of the state. It is a source of electricity, irrigation and potable water. He will not let Narmada flow decline at any cost. Beside plantation, efforts are being made towards installation of sewerage plant in all the 18 cities situated on the bank of river Narmada, immersion of poojan material in kunds, construction of moksh dhams for performing last funeral rites and to generate electricity from garbage. Ban has been imposed on sale of liquor on both the banks of Narmada River. Chief Minister Shri Chouhan further stated that equal treatment to living and non living beings and welfare of the World is the basic principle of Indian Culture. Therefore, Devi-Devtaas are worshipped linking them with animals. Govardhan pooja is also a worship of nature. The same spirit is the commitment of the government. Any industry which is dangerous to human beings and animals will not be established in the state. He mentioned that every person has responsibility to leave such a earth which can keep human beings and other species safe and secure. Shri Chouhan said that the Prime Minister Shri Narendra Modi has created a new atmosphere in the country towards the environment. He has worked with a thought to make earth safe for future generations. Positive results are being witnessed. Shri Chouhan appreciated the remarkable efforts undertaken by the National Green Tribunal in the field of environment conservation. He emphasized on the need for keeping strong approach by the NGT to make the earth safe for the living beings. He urged that conservation of forests and environment is responsibility of all. Deliberations on safety of animals and human beings should be made. Moreover, he expressed the hope that the conference will give a new direction to the efforts of environment conservation. Furthermore, he assured that the government will cooperate fully in implementing the conclusions of the conference.

Chief Minister Chhatisgarh Dr. Raman Singh said that change in views towards the environmental challenges is the need of the time. Deliberation should be made to ascertain approach. Giving an example of Sal Tree, he mentioned that caterpillars destroy 18 lakh Sal trees in 20 years. Hence, there is a need for development and research towards such kind of environmental challenges. Dr. Singh further said that livelihood is the foundation of forest dwellers’ attachment towards forest. There is a need to boost their attachment with forest for conservation of forest. Minor forest produces should be purchased on support price. He said that forestation efforts should be considered for plantation through tissue culture. Forest turmeric and Moosli and other herbal plants are on the verge of extinction. Discussion on efforts to provide it to the forest dwellers preparing them in the laboratory should be held. Dr. Singh said that plantation is considered as pious work like performing Yagya in the Indian Culture. Keeping rivers clean and prevention of water pollution is responsibility of all. Hence, it should be deliberated that forest should become a medium of development for people dwelling in the forest. They should not be ruined for forest conservation. Environmental deliberations on projects should be made with overall views. Referring to hydro power projects, he said that project is under abeyance since last 30 to 35 years for protecting trees on few acres of land. Pollution from generating electricity by coal could have been avoided tremendously, if it had been started on time. He urged to hold discussion in this regard on the occasion. Appreciating the initiative taken by CM Shri Chouhan for plantation , he mentioned that he possesses special capabilities for taking decisions and their implementation. Dr. Raman Singh said that the Prime Minister Shri Narendar Modi has taken a creative initiative for environment conservation by providing gas connections to 5 crore families. This work has saved 20 thousand crore trees. Efforts are needed to move ahead in this direction. Lauding the steps taken by NGT towards environment conservation, he said that consciousness towards environment has arisen in the country. He also assured for implementing conclusions of the conference in the state.

Chairman National Green Tribunal Justice Shri Swatantra Kumar emphasized on need to become pertinacious for efforts towards environment conservation. He mentioned that trees should be felled only for sustainable development and 10 trees in place of one should be planted. Shri Kumar said that reverent bahaviour is must with the nature. There will be very dangerous consequences, if nature is disrespected. Natural disasters occurred in the past are clear examples. More than what is fulfilled by the nature should not be taken. He urged that necessary efforts are needed in every nook and corner of the country considering entire world as a family. Furthermore, Shri Kumar mentioned that efforts being made for environment conservation by the Government of India and NGT are being praised at all level in the world. Their decisions and conclusions are being utilized in development of the entire world. He hoped that conclusions of the conference will prove fruitful for the state, country and the world.

At the outset Justice Shri Dilip Singh of NGT, Regional Judicial Bench – Central Zone threw light on various issues of environment consciousness. He informed that environmental enthusiasm and awareness has grown up among the youths due to the efforts of NGT. He praised the initiative of Madhya Pradesh for

strengthening Pollution Control Board. He further informed that in this series, first Regional National Conference was organized by the NGT at Chennai and this is the second conference at Bhopal. He hoped that conclusions of conference will prepare a roadmap for better future. Vote of thanks was proposed by Principal Secretary Environment Shri Malay Shrivastava. Programme was conducted by Sushri Pratiksha. Mementos were presented to the guests and plantation was under taken by them in academy premises. Conference was begun by lighting the lamp.