Empowering Nari-Shakti of North-East through ‘Skill Development Training’ under Ministry of DoNER.

New Delhi : North Eastern Region Community Resource Management Society (NERCRMS) under the aegis of ministry of DONER with an aim to empower Nari Shakti through Skill development has helped women living in rural areas of the North Eastern regions to earn their livelihood through mushroom cultivation.

It all started with the NERCRMS giving training to a Women self help group- Banchung for mushroom cultivation. This group is from Changlang District in Arunachal pradedh. The group was formed in January 2016 with a total of 20 female members. This group belongs to the Singpho tribe.

In this area mushroom cultivation is growing rapidly, with the produce fetching good returns in the market. The oyster mushroom is one of the most suitable fungal organisms for producing protein-rich food from various agricultural wastes without composting. Starting oyster mushroom production requires training and preparation.

Initially, the group was not aware of its activity and how to ensure its sustainability. In the year 2016, after the project’s implementation, the group learned about its process and activities and later became a part of it. A total of Rs. 1,22,000/- (2016 to 2020) was received through the Revolving Fund, where the group began with pickle making, weaving, and mushroom cultivation. 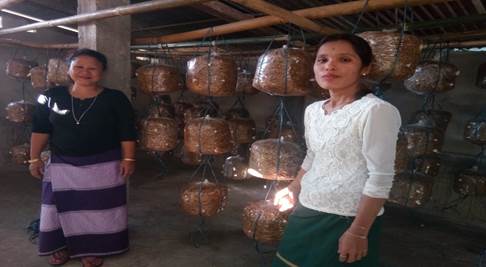 In the first week of September 2019, the group were trained on mushroom cultivation by Bad M Bhejega from Mohong village at Kherem Bisa. The group members actively participated during the training. Later, in January 2020, through the training and with the support of the revolving fund, the group started mushroom cultivation with an amount of Rs. 7000/- spent towards buying mushroom spawn, packaging plastic, rubber, and pipe spray.

The group expressed its sincere gratitude to the project for its theoretical and financial support received through NERCRMS, by developing and enhancing the skills of rural women by providing knowledge about mushroom cultivation for income generation.