New Delhi :Delhi Customs at the Indira Gandhi International (IGI) Airport organised a two-day workshop on “Combating Wildlife Trafficking” for all stakeholders of the Aviation Sector on 30th and 31st of May, 2022 at Terminal-3, IGI Airport in collaboration with the Wildlife Crime Control Bureau (WCCB), New Delhi. 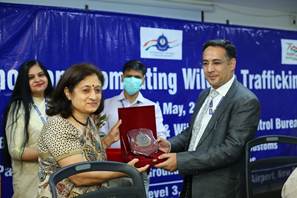 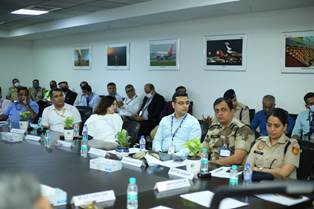 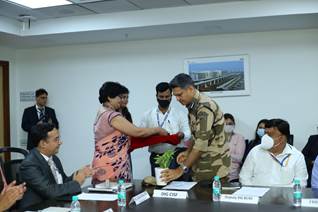 Shri Zubair Riaz, IRS, Commissioner of Customs (Airport & General), IGI Airport welcomed the dignitaries and other participants; and drew the attention of all to the huge significance of wildlife in the India way of life by alluding to the tiger “vahana” of Goddess Durga/Parvati.

The Guest of Honour Ms. Tilotama Verma, IPS, Additional Director, WCCB, delivered the key-note address and listed out the challenges faced by the law-enforcing agencies in enforcing the prohibitions in wildlife trade. She called upon all the stakeholders to focus on building databases, sharing real time information and create a synergy.

The Chief Commissioner of Customs, Delhi Customs Zone, Shri. Surjeet Bhujbal, IRS, pointed to the deep associations that people form with wildlife and explained how the environment was being degraded by the unchecked trade and smuggling in wildlife. He emphasized upon the necessity of conducting in-depth investigation and disrupting financial networks that sustain traffickers.

Chief Guest for the Session Shri. S P Yadav, IFoS, Member Secretary, National Tiger Conservation Authority, introduced the gathering to the history of Tiger Conservation in India and why protection of wildlife was the key to national economic and cultural prosperity. He also informed the participants that a new law was in the process of being framed by the present government, with wide-reaching powers and involvement of all law-enforcing agencies, which would go a long way in combating this menace.

The inaugural session was followed up by three sessions – (1) Global overview of trafficking, illegal trade in wildlife, the legal framework provided by the present laws and role of Customs, CISF and Airlines in preventing wildlife trafficking, intelligence gathering and investigation in wildlife cases; as well as the challenges being faced. These sessions were designed with a view to magnify effective and efficient capacity building of participants and also featured a hands-on session on the identification of Wildlife Contraband. The entire session is also being recorded as well as relayed for people to join virtually The Aviation sector is one of the most important conduits for the movement of trade and commerce, and is highly risk prone to be abused by wildlife traffickers. It is here that the other stakeholders in the aviation sector have an added responsibility to ensure the prevention of such crimes. Illegal wildlife trade poses the second-biggest direct threat to the survival of species after habitat destruction.

Customs Officers are central to identifying and containing international smuggling of products that threaten wildlife and the ecosystem. This workshop aims to empower them alongwith other aviation stakeholders with capabilities at par with global standards in respect of intelligence, expertise and domain-knowledge. The ultimate goal is to stop wildlife trafficking, ensuring populations of endangered, threatened, or otherwise protected species are no longer at threat of extinction and a more sustainable, caring and thoughtful relationship with mother nature is restored.

The workshop’s motto is to remind all the stakeholders the urgent need to step up the fight against wildlife crime and human-induced reduction of species, which have wide-ranging economic, environmental and cultural impact.