Day 2 of the “Smart Cities, Smart Urbanization” event saw engaging sessions that were held concurrently on the five thematic areas of urban sector, vis. Reimagining Public Spaces, Digital Governance, ClimateSmart Cities, Innovation and Smart Finance. The event is being organized in Surat, Gujarat by the Ministry of Housing and Urban Affairs (MoHUA) as part of the ‘Azadi ka Amrit Mahotsav’ (AKAM) to commemorate the 75th anniversary of Independence, and had a grand opening on 18.4.2022. In addition to the five thematic pavilions, a central ‘chowk’ area was built to have dedicated sessions and panel discussions on key urban issues that are being addressed by the Smart Cities Mission.  Further, a pavilion was setup by the Government of Gujarat, displaying models of some of the key projects being undertaken by them, and some of the key textile products of Surat.

Several key urban stakeholders from Central and State Governments attended the sessions and engaged in various activities that were showcased in the pavilions. These included inter alia, Officers of the Central Government, Principal Secretaries of States/UTs, Municipal Commissioners of Cities, MDs/CEOs of 100 Smart Cities,  State Level Nodal Agencies/ Mission Directorates, along with their officials and team members, professionals, industry representatives, global partners and experts, media, and members of academia.

The ‘Innovation Bazaar’ pavilion had session discussions on the City Innovation eXchange & SmartProcure Guidelines of MoHUA, that were  adopted by the city leaders. The visitors attending the session expressed keen interest on impactful solutions for cities in Augmented Reality for planned maintenance, AI for Property Tax Enhancement, Clean Air, Water Conservation & Waste Management. The pavilion engaged the visitors with an innovation game  called “Polaris” that explained the concepts of SmartProcure Guidelines which ease the procurement process for cities to pilot and procure solutions from startups. The participating city officials also explored ways to find synergies with the Rs. One Thousand crore Seed Fund Scheme of Startup India, under Department for Promotion of Industries and Internal Trade (DPIIT), to improve their innovation ecosystem.

Further, the visitors to the Innovation Bazaar pavilion experienced the value of the living-lab innovation model, in which real-time air quality & purification, water & energy footprints, and carbon footprints of the conference were showcased through mobile App developed for that conference by the Surat Municipal Corporation (SMC).

At the Climate Café- a pavilion for Climate related issues and initiatives of the Smart Cities Mission, visitors expressed their desires for a climate resilient and sustainable future on the ‘Tree of Life’ display that was kept at the pavilion. During his visit to the climate pavilion yesterday, Shri Hardeep Singh Puri, Union Minister of Housing and Urban Affairs placed a message on the ‘Tree of Life’, reiterating India’s climate commitments. The pavilion attracted several participants who took part in interactive activities like virtual reality games, ‘data wall’, and a game based on climate disasters. Several city leaders participated in the vision board which used threads to mark out their climate ambitions for the future.

‘Digital Duniya’ was developed at the event as the Digital Governance pavilion, showcasing various data and technology initiatives being implemented in cities for improving their functions and enhancing the quality of lives of the citizens. ‘Sayabot’, a robot welcomed the various guests at the entrance and suggested Covid appropriate behaviour including hand sanitisation and wearing a mask. A miniature Integrated Command & Control Centre was set up at the pavilion with live feed from Surat SMAC. The pavilion attracted several visitors who took part in interactive activities like ICCC Use Case & IUDX Touch Panel, a virtual tour to digital city through VR glasses, Karvi, a virtual assistant messenger, date game, a ‘data meet’, high value data set crowdsourcing, repository of digital initiatives set up through QR Codes, and a dedicated corner providing information on the National Urban Digital Mission.

The visitors to this pavilion witnessed informative and exciting sessions and panel discussions across areas such as AI transforming mobility through India Urban Data Exchange (IUDX), and Data Driven Decision making – a case study of Surat Smart City, Wastewater Intelligence Network. Success stories from cities on the use of data where shared by Smart Cities CEOs and Municipal Commissioners from other cities vis. Smt. Anindita Mitra, CEO Chandigarh Smart City Ltd. and Shri Sandeep Malvi, CEO Thane Smart City Ltd. along with a fireside chat with World Economic Forum on Smart Urbanization.

The Digital Governance pavilion focused on experiential learning by making visitors play an innovative data game that showcased the benefits of collaboration and data sharing. More importantly, the winners of the ‘Urban Geospatial Data Stories Challenge 2022’ and the Open Data Week that was held in the month of January were felicitated at the pavilion. The list of awardees is at Annexure 1.

Under the Reimagining Public Spaces theme, a guided tour of the ‘Amaro Padhos’, a smart neighbourhood of 30,000 sq ft constructed at the venue, was given to visitors from 100 Smart Cities and other dignitaries. Discussions were held in the pavilion on how to make cities better for young children and their caregivers. A key session was organised in the Central Chowk on ‘Human-scaling the Public Realm’, where the speakers shared on ways to  create capacity within their ULBs/development authorities to design and build cities that work for its people. The pavilion had an awards ceremony where winning cities  in each of the Placemaking Marathon round 1 & 2, that were held in the month of September-October, 2021 and January-February 2022 under AKAM were also announced and certificates were given. List of winners is at Annexure 2.

DETAILS ON THEMATIC PAVILIONS AT THE EVENT:

The event showcases various interactive activities, planned interactions with eminent speakers and learnings across the 5 themes for over 1000+ participants who have registered from across the country.

In the Digital Governance Pavilion, interactive workshops and immersive sessions are being organized to showcase benefits accepted from digital governance in cities. These are being demonstrated basis real-time data, AI/ML cases, and use of platforms, such as India Urban Data Exchange (IUDX) and Integrated Command and Control Centre’s (ICCC). A live session of Surat ICCC will be showcased at the pavilion. The space will also be hosting a data game for stakeholders to understand the value of open data.

The Innovation Pavilion will host cutting edge solutions from leading startups in the urban tech sector, with interactive activities and sessions designed to aid in comprehension and awareness of programs, with a dash of gaming to make learning fun. The session will discuss/promote the usage of City Innovation eXchange (CIX) and the SmartProcure Guidelines, the Smart Cities Mission is pursuing the institutionalisation of innovation in smart cities.

The Smart Finance theme will focus on innovation in urban finance helping cities identify untapped sources of revenue. The section will showcase an exhibition of 20+ successful and innovative PPP projects of Smart Cities Mission, a section with MUNIFY (where ULBs can know their budgets and finance overviews), Invest India Grid section, National Infrastructure Pipeline (NIP), and an Output and Outcome Monitoring Framework (OOMF) Clinic.  29 Global/National experts will be speaking on diverse urban finance issues.

Of the total investment of ₹2,05,018 crore under the Smart Cities Mission, projects worth ₹93,552 crore was proposed to be developed by Center and State funds. As on date, almost 100% of these projects i.e projects worth ₹92,300 crore have been work ordered. The Financial progress in the Smart Cities Mission has accelerated too. From 2018 when the total expenditure in mission was ₹1,000 crore, it has increased to ₹45,000 crore. The utilization percentage of the total GoI funds released to cities is at 91%.

Projects developed under the Smart Cities Mission are multi-sectoral and mirror the aspirations of the local population. As on date, 80 Smart cities have developed and operationalised their Integrated Command and Control Centres (ICCCs) in the country. These operational ICCCs functioned as war-rooms for COVID management, and along with other smart infrastructure developed under the mission, helped cities in fighting the pandemic through information dissemination, improving communication, predictive analysis and supporting effective management. 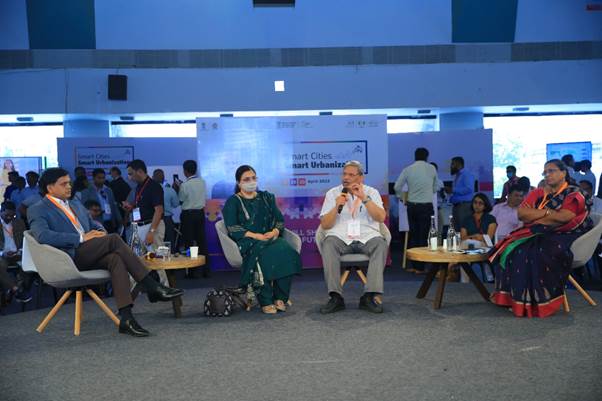 Special mention for the awards:

2. Kohima for Pocket park and slow street at Forest Colony

3. Pimpri Chinchwad for 8 to 80 Park at Sudarshan Chowk