Bhubaneswar: BJP president Amit Shah arrived in the state on Monday for a three-day tour during which he will give a boost to the party’s preparations at the booth level. Bharatiya Janata Party (BJP) President Amit Shah today said BJP will win the 2019 elections with a two-thirds majority. 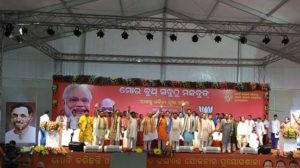 Shah said this while addressing a mass gathering at Hugulupata in Ganjam district. Earlier Shah Paid floral tributes to the great warriors of the “Paik Rebellion”, who fought against the East India Company’s rule in Odisha in 1817. Shah also today kicked off his three day campaign in Odisha to strengthen the party at the root level and encourage party workers by launching a door-to-door campaign.

Shah, who landed in Bhubaneswar yesterday evening, would tour Ganjam, Jajpur and Khurda districts where he would meet the party’s grassroots workers as part of the party’s “Mo booth, sabuthu mazboot (my booth strongest)” programme.
Shah would come again in August to connect with booth-level workers and prepare strategies for strengthening of the party.