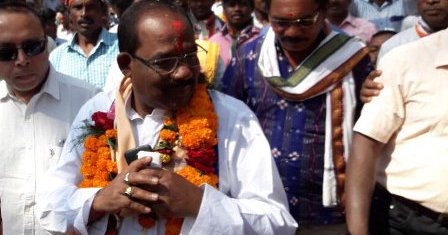 Bhubaneswar: Bijepur MLA candidate Pranaya Sahu joined the Odisha’s ruling Biju Janata Dal (BJD) on Tuesday along with hundreds of his supporters joined the party in the presence of Chief Minister and BJD supremo Naveen Patnaik at his residence (Naveen Niwas).

In his media reactions, Chief Minister said, “I’m glad Pranaya Sahu and his supporters have joined the party today. I welcome him to the BJD.”

It may be mentioned here that the former Congress leader, Pranaya Sahu, who unsuccessfully contested Bijepur by-poll last year, tendered his resignation to the OPCC president Niranjan Patnaik and AICC leadership on Monday.