New Delhi :As a part of the Azadi Ka Amrit Mahotsav celebrations by the Ministry of Tribal Affairs, the Minister of Home Affairs and Cooperation, Shri Amit Shah, inaugurated the National Tribal Research Institute today in New Delhi. 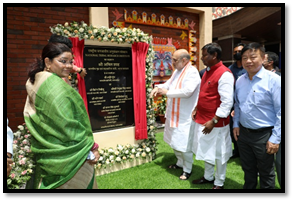 In his address, the Union Home and Cooperation Minister said that today is a very important day for the whole country, especially for the tribal society. Today this National Tribal Research Institute is coming into existence according to the vision of the Prime Minister, Shri Narendra Modi. There are many Tribal Research Institutes in the country, but there was no national link connecting many diversities of tribal society and this institute  built according to the vision of Shri Narendra Modi will become that link.

Shri Amit Shah said that Shri Narendra Modi also announced and celebrated Janjatiya Gaurav Diwas for the first time after Independence. As Chief Minister of Gujarat, Shri Modi started  a scheme in the form of Vanbandhu Kalyan Yojana for the overall development of tribal society, which led to  development of individuals, villages and regions. Tribal society cannot develop unless there is complete development of the individual, the village and the region.

Pl click here for details on address of Home Minister

Addressing the gathering, Shri Kiren Rijiju, Minister of Law and Justice, said that this is now responsibility of all of concerned and research fellows present here to take the tribal culture, history and development, forward. Shri Rijiju remarked , “This is a landmark event as a National Tribal Research Institute and its state TRIs will be taking forward the study of various distinctive tribal communities and the rich indigenous history, cultural heritage and art.”He added , “Following the vision of our PM, it is our duty and shared responsibility to encourage and empower tribals for a stronger Atmanirbhar Bharat tomorrow.”

During the event, Shri Arjun Munda, Minister of Tribal Affairs, stated that the inauguration of NTRI is a landmark initiative of the Tribal Affairs Ministry and will herald a new chapter in the Institutional Development of Tribals and their welfare. He also said that NTRI along with state TRIs will help in strengthening of policy making. Shri Arjun Munda disclosed that Ministry of Tribal affairs has achieved the distinction of running most of its programmes in digital mode. Today, 30 lakh tribal students are being awarded direct scholarships through the DBT Mechanism of the Ministry, he informed. Thus, we are efficiently processing all the work related to the scholarship scheme online and ensuring that the projects with the NGOs and COEs as well as with states remains ongoing through the digital mode, Sh Arjun Munda added.

Later, briefing the media Shri Arjun Munda said that NTRI will work to deliver outcome-based implementation of schemes, programmes and policies for tribal population right down to the grassroot level.  It will harness the expertise of Universities, NGOs, COEs and other experts in various fields to undertake research, training, capacity building which will help the tribal population to embark upon the renewed journey of development including good livelihood , health , education and AtmaNirbharta and their ultimate empowerment. The apex Research Institute will provide inputs to help fill policy gaps at various levels and also ensure that the Schedule Tribe Component of various Ministries converts into actual delivery on the ground for transformation of tribal society, the Minister explained.

The NTRI is a premier and apex National Level Institute and will become the cynosure of tribal concerns, issues and matters in academic, executive and legislative fields. It will collaborate and network with other reputed research institutes, Universities, organizations as well as academic bodies and resource Centres. It will also monitor projects of Tribal Research Institutes (TRIs), Centres of Excellence (CoEs), research scholars of NFS and set up norms for improvement in the quality of research and training. Its other activities are to provide policy inputs to the Ministry of Tribal Affairs as well as State Welfare Departments, Design studies and programmes that improve or support socio-economic aspects of tribal lifestyles, create and maintain of Database of PMAAGY, provide guidelines in setting and running of Tribal Museums and showcase rich tribal cultural heritage of India, under one umbrella. 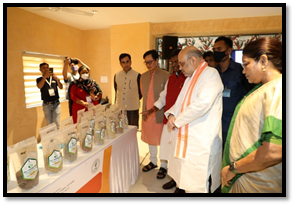 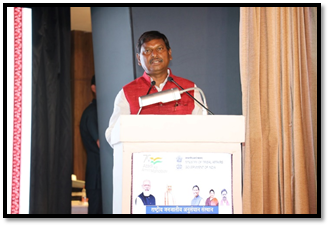 The keynote address was delivered by the   Secretary, Ministry of Tribal Affairs, Shri Anil Kumar Jha at the event today.

In the event, two booklets on the 8 Years of Achievements and the Key Initiatives of the Ministry of Tribal Affairs were released by Shri Amit Shah.

An exhibition of the 8 years of achievements of the Ministry of Tribal Affairs, under the leadership of the Prime Minister was also showcased. More than a 100 tribal artisans and tribal troupes across country showcased their indigenous products and performances. 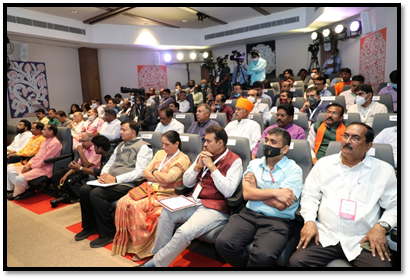 The event was live-streamed on Facebook, Twitter, YouTube and other prominent social media platforms. The exhibition remained open for the public from 2 PM onwards and at 6 pm, the event concluded with the scintillating performances of tribal troupes invigorating the audience.