Specific funds for JE-AES affected priority districts are allocated on the basis of drinking water sources and the extent of water contamination. 0.5% budget under Jal Jeevan Mission is allocated to carry out activities for providing potable drinking water in every rural householdof JE-AES affected priority districts. Rs 462.81 Crore has been allocated to these five States as JE-AES component for 2021-22. 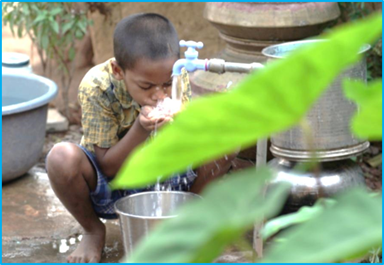 Japanese Encephalitis – Acute Encephalitis Syndrome (JE-AES) is a serious health hazard. The disease mostly affects children and young adults which can lead to morbidity and mortality. These infections particularly affect malnourished children of poor economic backgrounds. As many as 61 high priority districts in five States are identified for strengthening prevention and control measures through five Union ministries with Ministry of Health and Family Welfare as the nodal ministry. Jal Jeevan Mission is a key programme in reducing the burden of disease in these districts.

Following the principle of Prime Minister’s vision of ‘SabkaSaath, Sabka Vikas, Sabka Vishwas’, the motto of the Mission is to ensure ‘no one is left out’ and every household in every village should be provided with tap water connection.  At the start of Jal Jeevan Mission in 2019, out of a total of 18.95 Crore rural households in the country, only 3.23 Crore (17%) had tap water supply. In 22 months, despite Covid-19 pandemic and lockdown disruptions, Jal Jeevan Mission, has been implemented with speed and 4.44 Crore households areprovided with tap water supply. With the increase in coverage by 23%, presently 7.67 Crore (40.51%) rural households across the country have tap water supply. Goa, Telangana, Andaman & Nicobar Islands and Puducherry have achieved 100% household connection in rural areas and has become ‘Har Ghar Jal’. Realizing Prime Minister Shri Narendra Modi’s vision of providing clean tap water to every household, at present, 69 districts and more than 98 thousand villages have tap water supply connection in every household.

Among these five States, Bihar has performed well in providing tap water supply to rural households in its 15 JE-AES affected prioritydistricts. On an average 85.53% tap water connection have been provided in these districts.  Nalanda with 96% tap water supply connections, followed by Saran &Gopalganj 94%, Vaishali &Siwan 91%, Paschim Champaran84%, and PurviChamparan80% are the leading performers in the State. Jal Jeevan Mission announced by the Prime Minister on 15thAugust 2019 from the Red Fort is under implementation in partnership with States/ UTs to provide tap water connection to every rural household of the country by 2024. Total budget for Jal Jeevan Mission in 2021-22 is Rs 50,011 Crore. With State’s own resources and Rs 26,940 Crore as 15thFinance Commission tied grant for water and sanitation to RLBs/ PRIs, this year, more than Rs. 1 lakh Crore are being invested in rural drinking water supply sector. This is creating new employment opportunities in villages and boosting the rural economy.