65 ‘Samajik Adhikarita Shivirs’ for Distribution of Aids and Assistive Devices to Divyangjan under ADIP Scheme of Govt. of India in Jhabua. MP.

To commemorate ‘Azadi Ka Amtrit Mahotsav’ the Department of Empowerment of Persons with Disabilities (Divyangjan) (DEPwD), Ministry of Social Justice & Empowerment, Govt. of India organized 65 distribution camps across the country under the ADIP scheme wherein various types of aids and assistive devices were distributed to more than50,000 Divyangjan across the country covering 21 States/UTs.All the distribution camps at various locations wereconnected on-line through video conferencing at the main venue of the event which was at Polytechnic Collage in Jhabua District of Madhya Pradesh which will be the Central Point of this mega event.

The Dr. Virendra Kumar, Union Minister of Social Justice and Empowerment inaugurated the main event of the distribution camp today in Jhabua district of Madhya Pradesh in the presence Shri Guman Singh Damor, Member of Parliament, Ratlam-Jhabuaand local public representatives of the districts. On this occasion, Shri Rajesh Aggarwal, Secretary, DEPwD, Government of India briefed the outline of the mega event and reiterated the commitment of government for empowering the persons with disabilities of the country.

Speaking on the occasion, Union Minister Dr.Virendra Kumar said in his speech that Adhering the mantra of the Prime Minister “Sabka Saath, SabkaVikas, SabkaVishwas and SabkaPrayas” and keeping in mind the [email protected] “AmritMahotsav of Independence”, the Department of Empowerment of Persons with Disabilities under our Ministry is implementing various centralized schemes for social, cultural, educational, and economic empowerment of Divyangjan and to create an inclusive and accessible environment for them to ensure their overall development.

Union Minister said that government has laid great emphasis on distribution of aids and assistive devices to the Divyangjan. Union Minister informed that During 8 years and the current year, various implementing agencies of the department have organized more than 13,000 camps across the country at a cost of Rs 1526 crore, covering more than 23 lakh beneficiaries. Through ‘Arjun Portal’ under ADIP scheme, now Divyangjan can easily apply for assistive devices through online mode and can also lodge complaint for repair of any equipment.In the direction of educational empowerment, our government has provided scholarships worth Rs. 633.47 Crore to 2.07 lakh disabled students under the scholarship scheme. The scholarship amount is directly sent to the bank accounts of the beneficiaries. In Madhya Pradesh, 38,254 Divyangs have been given scholarships worth Rs 53.67 crore. Moreover, in Madhya Pradesh Rs. 30 crores 47 lacks has been released for 89 buildings under the Accessible India Campaign.

A separate institute has been set up in Delhi for research and training in Indian Sign Language in the country. ISL dictionary with total of 10000 words has been developed in which people who cannot speak and cannot hear are getting benefited.From March 21, 2015, the National Action Plan for Skill Development Training was launched. So far Rs 132.02 crore has been utilized for the training of 1.30 lakh disabled students. In Madhya Pradesh, 4160 Divyangjans have been trained at a cost of Rs 3 crore 83 lakhs.

The objective of organising these camps aiming at to build a vision to have an inclusive society in which equal opportunities are provided for the growth and development of Divyangjan so that they can lead a productive safe and dignified lives in the Society. The Camps will be organized in coordination with Artificial Limbs Manufacturing Corporation of India, Kanpur along with National Institutes/CRCs across the country under the Department also participated in the mega event.

The camp being organized at Jhabua for distribution of assistive devices for divyangjanis the largest camp organized by the department in the district so for.Alongside the main event at Jhabua. Union Ministers of State of Social Justice and Empowerment Kumari Pratima Bhaumik addressed distribution camp organized at Dharmpura in North Tripura while Shri ANarayanswamy also participated in the distribution camp inVijaynagara, Karnataka having wherein aids and assistive devices worth of Rs 102 lakh will be distributed to more than 1200 Divyangjan beneficiries.

In addition to above distributions 150 Motorised Tricycle value of worth Rs 63 Lakhs will also be distributed to identified orthopedically impaired divyangjans of Jhabua District in the function under the CSR initiative of Power Finance Corporation Ltd., a government of India CPSE.

Senior officials of the Ministry of Social Justice and Empowerment, Government of India, ALIMCO/NIs/CRCs and District Administration, Jhabua will also be present on the occasion. 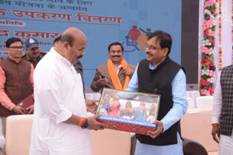 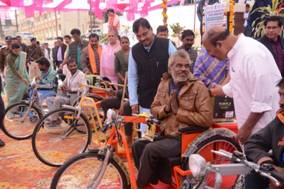