New Delhi: The 5th batch of business delegation from Tamil Nadu reached Varanasi to participate in the month long ‘Kashi Tamil Sangamam’.  The delegation comprising 216 people were accorded a ceremonious welcome late yesterday night at Varanasi Cantt. Railway station. The guests were seen to be at ease and were delighted at the grand reception amidst playing of ‘Damru’ and showering of flowers petals.

Apart from people of Tamil Nadu, the delegation also had people from Puducherry and other adjoining areas. The members of the delegation were overwhelmed with warm welcome on reaching ‘Kashi Vishwanath’.

After darshan, the guests were taken on a tour of the temple premises and served food in ‘Maa Annapurna Rasoi’. Later on they also visited other heritage sites of Banaras in and around the temple area, and nearby markets. 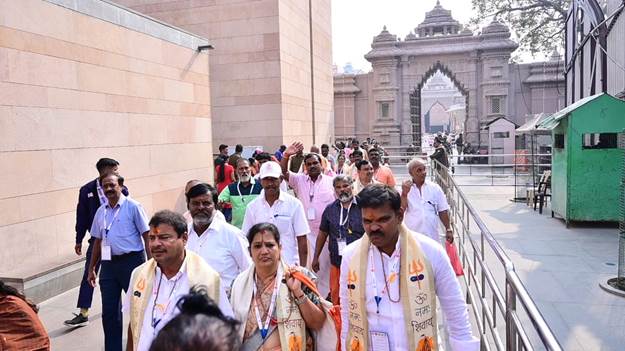 As a part of their tour itinerary, business delegates later in the afternoon will also visit ‘Sant Ravidas Ghat’ on a cruise and attend the ‘Ganga Aarti’ followed by visit to other adjoining Ghats.

After witnessing the ‘Ganga Aarti’, later in the evening they will attend the cultural programme organised for the guests and local visitors at the BHU Amphitheater.