Union Minister for Home and Cooperation, Amit Shah paid tributes to Basavanna on the occasion of Basava Jayanti in Bengaluru today

New Delhi : The Union Minister for Home and Cooperation, Shri Amit Shah paid homage to Basavanna on the occasion of Basava Jayanti in Bengalur today. In another program, Shri Amit Shah inaugurated and laid foundation stones of various projects including the inauguration of Nripatunga University. Several dignitaries including the Chief Minister of Karnataka, Shri Basavaraj Bommai were present on the occasion.

In his address, the Union Home and Cooperation Minister said that Basavanna had set an example hundreds of years ago of universal and all-encompassing democracy in Kannada society through Anubhav Mandapam., Basavanna gave beautiful and simple solutions through his sayings, to the problems of every section of the society. He said that the youth must read Basavaanna’s sayings along with their education, because by reading Basavaanna’s sayings there will never be any problem in life. The solution to all problems is visible in the words of Basavaanna. Shri Shah said on the occasion of the birth anniversary of Basavanna he wanted to say that not only Karnataka but the country and the world should move ahead on the path of peace, harmony and inclusive democracy.

Shri Amit Shah said that the future of any country is built in its youth and their character. Knowledge has been worshiped continuously for 100 years in this college and many students here have made significant contribution to Karnataka and the country. This college has set many milestones. Since 2020, this college has been known as Nripatunga University, today it has been formally inaugurated and its logo has also been unveiled. 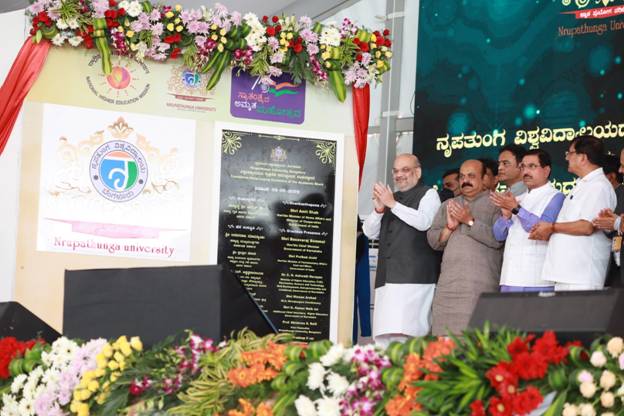 The Home Minister said that this year is the year of Azadi Ka Amrit Mahotsav (the 75th Year of Independence). It is 75 years since our country attained independence and the people have contributed in their own way in making the nation. In this journey of 75 years, the country has crossed many destinations. He said Prime Minister Narendra Modi has decided that the 75th Year of Freedom is to be marked with important events. The main objective of the Azadi Ka Amrit Mahotsav is that the youth should take the country forward by imbibing the patriotism of our Freedom Fighters and getting to know them. Shri Shah that the75th year of Independence is also a time to make a resolution. Everyone should pledge that in the next 25 years, by contributing to the development of the country, we should fulfill the dream of the Freedom Fighters by making India a world leader by 2047, the centenary year of our Independence. He said that when 130 crore people take a pledge, the country takes 130 crore steps forward.

The Union Home Minister said Shri Narendra Modi has done a lot of work for higher education after he took over the Prime Ministership,. After the formation of his government, 6 new Central Universities, 7 Indian Institutes of Management (IIMs), 7 Indian Institutes of Technology (IITs), 15 All India Institutes of Medical Sciences (AIIMS), 209 new medical colleges, 320 new universities in the country and 5,709 new colleges have been opened. He said that keeping in mind higher education needs of rural areas, more than 410 rural universities have been established. The Narendra Modi government has also established 22 new universities in the North East, established the country’s first Sindhu Central University in Ladakh. To give opportunities to young professionals, Shri Narendra Modi has also established professional universities such as the Forensic Science University, Raksha Shakti University, Rail and Transportation University. 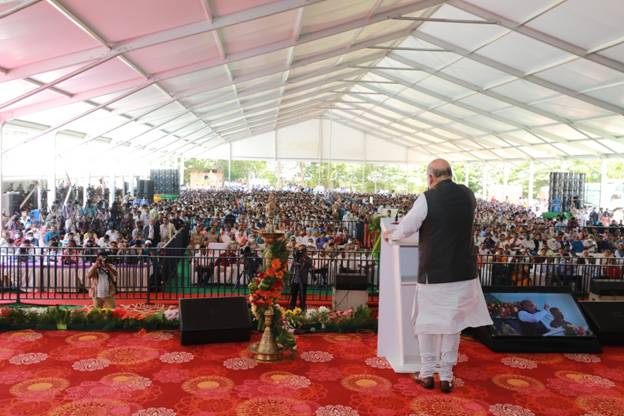 Shri Amit Shah said Shri Narendra Modi’s every effort and concern is to make the nation the best in the world in every field, and has created many programs and also implemented them with firmness. Referring to the security of the country, the Home Minister said that before 2014, Pakistan-sponsored terrorists used to attack the country every day and the response of the government of the day was zero and only statements were issued. After Shri Modi became the Prime Minister, there was an attack in Uri and Pulwama, within 10 days, Shri Narendra Modi gave befitting replies by conducting surgical strikes and air strikes. This has made a big difference and today the world knows that no one can tamper with India’s borders or else a befitting reply will be given. Shri Shah said earlier across the world only the United States and Israel used to respond to those who tampered with their borders and caused harm to their Armed Forces. Prime Minister Narendra Modi has added India name to that list.

Shri Amit Shah said that many issues such as Articles 370 and 35A and CAA were abolished by Shri Modi. He said the date August 5, 2019 will be written in India’s history in golden letters. Shri Narendra Modi ji has connected Kashmir with India forever by removing Article 370. We have worked to make India an industrial hub by bringing a lot of schemes in the field of industry, if India becomes a manufacturing hub then it is important for us from two points of view. A market of 130 crore of population is available and if India becomes a manufacturing hub then the youth will also get opportunities. He said that the Narendra Modi Government has achieved much in many fields and due to this, today the people increased confidence that when the nation celebrates 100 years of its Independence, India will be number one in the world and no one can stop can  stop it.

The Union Home Minister said that a Forensic Science Lab has also been inaugurated in Bellary today. Karnataka has implemented the concept of Regional Forensic Science Laboratories very well and he congratulated both the Chief Minister and Home Minister of Karnataka. He said that without scientific investigation, the ratio of conviction cannot increase. Unless the Prosecution Agency has scientific evidence, there can be no conviction. Shri Shah said that today a new concept of Police Beat and E Beat has also been launched here. The concept of e-beat is launched across Karnataka and it will help in taking the police services up to the poorest person in a time bound manner.

Anurag Thakur calls to utilise the State-of-the-art facilities at Padukone-Dravid Centre for Sports Excellence and develop more skills to compete at the International level.