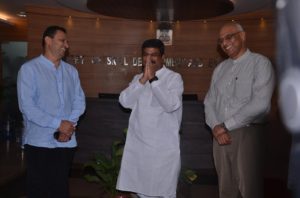 After taking charge interacted with Media Minister Pradhan reiterated that we will work for the welfare of the people of India through both the ministry. Ministry will give a big push to create a bigger eco-system for self employment and entrepreneurship.
It should be noted that the ministry was specially created in November 2014 and Rudy was given charge with an ambitious target of skilling 40.2 crore workers by 2022. However the ministry failed to achieve the target and it even abandoned targets and said the focus is now on quality training. The skilling mission is one of the topmost priorities of the government.

Sudarshan Bhagat Takes Over As Minister of State for Tribal Affairs