Bhubaneswar : The one of a kind International Storytelling Festival – BhuFeSto concluded today. Children from 15 schools in the city and their parents turned up in hundreds over the course of the festival to listen to internationally renowned storytellers. The five days long festivalhosted around 16 storytellers and their troupes from all over the world. This included the likes of Paula Martin from Argentina, Dr.WajuppaTossa from Thailand and Sabrina Anastasia from France. Interestingly some of the best storytelling the listeners experienced was by local storytellers from Odisha, who were on par with the best in the world.
The festival was lauded for its inclusive nature as special storytelling sessions were conducted in sign language for people with hearing disabilities by Nita Gopalakrishnan, the only such specialist in the country. There were also storytelling sessions for children with visual disabilities by Deepa Kiran.
The story telling sessions were accompanied by performances from the rich storytelling traditions of India. This included performances like; 13th century Urdu oral storytelling form of Dastangoi represented by its most famous practitioner HimanshuBajpai. Today’s special attraction also included Dastangoi; an Urdu storytelling session by HimanshuBajpai who also hails from Lucknow. He hosted a story telling session for children called “RasileyAam Ki RasBahriKahani”. Much like the famed Arabian Nights Tales, Urdu storytelling sessions essentially are also short stories within a larger story. In the evening HimanshuBajpai presented a special Urdu shayari session based on the life of famous poet MajazLakhnawi called MajazLakhnawikiZindagiki Dastan. The poet is also known to have penned the Aligarh Muslim University anthem and is a close relative of Javed Akhtar.
The folk storytelling tradition of Pandavani from Chhattisgarh was also presented. This tradition dates back as far as the Mahabharata. In addition to their storytelling, a unique never before Jugalbandi of the Manganiars; Rajasthan folk musicians was kept the audience captivated.
Gouranga Dash, retired Professor of Odia at Ravenshaw University, enthralled everyone with his storytelling of Ramayana through the rich tradition of shadow puppetry called RavanaChhaya from Odisha that he has kept alive and enriched. Founder of the Sri Rama Institute of Shadow Theatre and KathinandaKandheiGhara (Kathinanda Puppet Museum) in the village of Kutarimunda, Sri Das trains craftsmen and artistes in the making of puppets and staging shows. The first 3 shows he presented were the story of Ramayana.He presented his modernization of that technique throughBapukatha at Kharabela Park.
Prachitara, a regular storyteller at the Bakul Library, who used to tell stories at the Bakul Library on the road at Rahagiri/PathaUtsav was more familiar to the local city audience. But she was a transformed storyteller on the BhuFeSto platform. She told the story of “MalayabatiraAnasan” by Prasanna Kumar Mishra.Prachi made it very interactive and her story was a musical in which the children kept dancing and singing along with her. 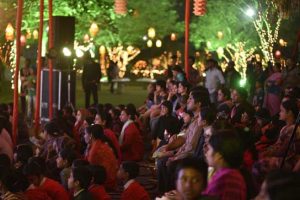 The popular Film and TV actor Usasi Mishra was a surprise for children and parents as she made her storytelling debut at the festival with popular stories of “Tuan Tuin” and “BudhiAsuruni”. Although most of the children and parents knew the stories, they visualized the story like never before with Usasi’s dramatized presentation wherein they could hear the sounds of the animals and go through the emotions of Tuan and Tuin as Usasi narrated the story.
Unlike the others Odia storytellers, LopamudraMohantywas a professional storyteller. Big Buddy as she is popularly called, told the musical Odia story of Lau Dhuduki. The story of the mother who goes to meet her married daughter and while crossing the forest, she meets the tiger, a cobra and bear and tricks them with her cleverness. Ramendra Kumar another popular children’s writer was also part of the line-up and engage hundreds of children for more than an hour at a stretch with his theatrics and his stories.
BhuFeSto curated by Bakul Foundation as a part of .FEST organized by BDA and Odisha Tourism plans to continue next year as an annual festival.