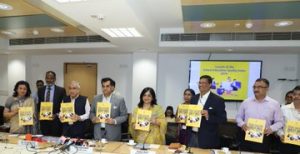 Odisha and four other States, Haryana, Assam, Uttar Pradesh and Gujarat, registered high rates of improvement in their overall performance score between 2015-16 and 2016-17.

When apprised by Chief Secretary Asit Tripathy and School and Mass Education Secretary Chitra Armugam, Chief Minister Naveen Patnaik advised the department to keep up the good work and endeavour for getting into top three.

It was also revealed that the State gained 18.5 per cent to rise from 43.4 per cent to reach at 61.9 per cent in the category of Governance Processing Aiding Outcomes, which consider factors covering student-teacher attendance, administrative adequacy, training, accountability, and transparency.

The other outcomes that the NITI Aayog considers are learning out comes, access outcomes, infrastructure and facilities and equity outcome. The State has also performed in these factors.

General Election to Legislative Assemblies of Himachal Pradesh & Gujarat and…

Centre’s reforms result in consistent increase of FDI inflow; FDI grows from US $…