The ceremony takes place at Vigyan Bhawan in New Delhi on Saturday. Under the joint auspices of Fame India magazine and Asia Post, 21 outstanding ministers of the country selected in year 2019 are being honoured in the ceremony.

Dr. Pandey congratulated Minister Jena for the award and hoped that he would continue to serve the state sincerely in future also. He also lauded the efforts of the organizers for holding the awards ceremony every year and added that recognition always motivates to perform better.

Minister Pratap Jena thanked the organizers for the honour. He said that he was committed to serve the people of the state. 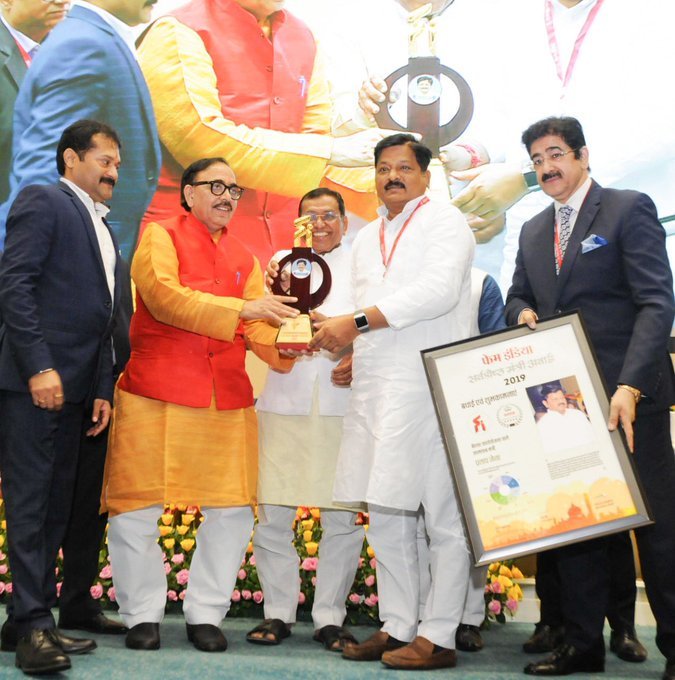 Dr. Kirit P Solanki and Sabir Ali MPs also addressed the gathering. Director and CEO Fame India U.S. Sonthalia welcomed the Chief Guest and informed that the survey was conducted in all states on various indicators and best performers were chosen for the awards.

Founder of The Front, Rana Yashwant and Chancellor of Asian University, Sandeep Marwaha also detailed out the objectives of the awards ceremony.

Fame India has constituted this Award to recognise the ministers who implement the government programmes in the right direction and work with responsibility remaining away from corruption.

It should be noted that Pratap Jena is a senior BJD leader and senior Cabinet Minister in the Naveen Patnaik government with Panchayati Raj & Drinking Water, Law, Housing & Urban Development portfolios. He is elected as the Member of Legislative Assembly for the fifth consecutive time from Mahanga constituency. He is also the General secretary of the farmers wing of Biju Janata Dal, Biju Krushak Janata Dal. Earlier, he had served as the Minister of School and Mass Education during his third term (2009-2012) and as the Minister of Health & Family Welfare, Law and Information & Public Relations in his fourth term (2017-2019) in the assembly.

Vidya Balan Makes It To The Palace Of Westminster