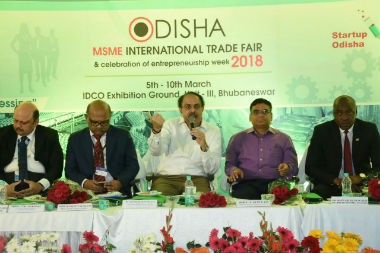 Bhubaneswar: The 1st seminar was held today on “Credit and Marketing Linkage to MSMEs and Exporters” on the sidelines of Odisha MSME International Trade Fair. Shri L.N. Gupta, IAS, Additional Chief Secretary, MSME Department, Odisha setting the context, gave a brief background of MSMEs in the State and stated that 54 clusters have been identified in the State, which can be assisted under MSE-CDP Scheme of Government for improved facility and better technology for the MSMEs.

He stated that nearly 40,300 MSME units have ‘gone into production’ (GIP) in the state during the current FY employing 1,15,000 persons. He added that in order to improve quality of MSME products and their marketing, a drive to implement ZED (Zero Effect and Zero Defect) in collaboration with Quality Council of India and GeM (Govt. e Market Place) is being initiated. He also assured that provisions of Odisha Procurement Preference Policy will be enforced.

Dr. Arun Kumar Panda, IAS, Secretary to Government of India, Ministry of MSME in his Keynote address spoke informed that more than 1 crore business units have been registered under GST, of which 97% are MSMEs. By registering under GST, these MSMEs have got an opportunity to changeover from ‘informal sector’ to the ‘formal sector’ and will have advantage of formal sector in terms of getting credit from the formal financial institutions. He also informed that the Central Tool Room Training Centre (CTTC), Bhubaneswar is one of the best in the Country and that many parts of the Mangalyan (Orbital Mission to Mars) and defense equipments have been manufactured and supplied by a consortium of MSMEs through CTTC, Bhubaneswar. He called upon MSMEs to take advantage of cluster development schemes such as MSE-CDP and SFURTI and e-marketing by registering under GeM. He also spoke about the web portals namely, ‘MSME Samadhan’ to address the problem of delayed payment and ‘MSME Sambandh’ containing information on procurement from MSMEs by Central PSUs.

Shri Sudhir Thakore, General Manager, SBI, Bhubaneswar spoke about the importance attached by banks for lending to MSMEs. Responding to various queries on the difficulty faced by the entrepreneurs in getting finance particularly in respect of collateral security and coverage under CGTMSE, he said that they have advised all branches not to insist for collateral security on loans up to Rs.2.00 Crore and cover them under CGTMSE scheme. Any deviation should be informed out to the controlling offices of the respective banks for taking corrective action.

Shri Sundeep Nayak, IAS, MD, NCDC, spoke on the role of NCDC in financing cooperative societies in farm and non-farm sector. He elaborated on the role of NCDC in strengthening the existing and prospective cooperatives. He proposed for convergence between MSMEs and Cooperatives in the State through their schemes so that the Industrial Cooperatives can take advantage of NCDC schemes. ACS, MSME declared Directorate of Industries as the ‘Nodal Point’ to deal with NCDC for MSME’s finance.

Sri Utpal Gokhale, General Manager, Corporate Banking Group, Export – Import Bank of India, Mumbai spoke about the facilities like line of credit (LOC) offered by EXIM Bank in promoting exports in the Country and its role in handholding the exports in association with various export promotion organizations and five Departments of Government of India.

Shri Deep Shekhar, IRS Customs Commissioner dealt with GST and other custom related issues relating to MSMEs and Exporters. He agreed to have an open house session with them.

Smt. Anita Sengupta, Additional DG, Foreign Trade, Ministry of Commerce highlighted about the role of DGFT as a facilitator to promote entrepreneurship in the export sector. Sri Satwik Swain, Secretary, OASME highlighted the issues concerning the MSMEs in the State and sought interventions of Government in resolving the matter. Shri S.R. Pradhan, IAS, Director of Industries presented proposed vote of thanks to the panelists, foreign delegates, entrepreneurs and Media.