Bhubaneswar: Children migrate within and across the state and national boundaries, with or without their family due to different reasons: economic, socio-political and environmental. According to the 2011 Census, about 400 million people in India are migrants. Of these, about 25% migrate seasonally. There are no specific data available on child migration in India. Informal estimate puts the figure at 15 million. The East zone migration corridor comprises of states like Odisha, West Bengal, Bihar, Jharkhand, and Chhattisgarh in which large scale family migration with children is observed.
The major demand for this huge work force comes from the brick kilns, construction sites and other such establishments. The discernible trend is that family migration from Bihar and Jharkhand is mostly to the brick kilns of West Bengal and Odisha. The Odisha and West Bengal migrants opt to migrate to Andhra Pradesh, Tamil Nadu, Kerala and Karnataka etc. Odisha and West Bengal are both migrant receiving and sending states.
Children of migrant workers live a life full of distress. Half of their lives are spent in inhospitable, unhygienic, hazardous worksite environments, particularly in premises of building construction, brick kilns, stone quarries, plantations and other informal sectors. Since the children are not seen as responsibility of the state they move to but do not belong to, they become virtually invisible, go unnoticed and get alienated from accessing basic services such as child care, education, nutrition, health, protection. They become easy-pickings for child labour and sexual exploitation.
No doubt, laws and policies are there for their benefit and protection but due to lack of inclusive policies, implementation glitches and poor convergence and coordination mechanism in place both at the source and the destination, they suffer, especially so, the children.
There have indeed been some path-breaking initiatives and efforts taken up by governments as well as civil society organizations alike for the migrant children in India. For example the Sarva Siksha Abhiyan, Govt. of India, came up with guidelines to set up ‘seasonal hostels’ wherein they are provided special training and education, both at the source and the destination states. Other examples include the ICDS* Program has a mandate to include the migrant children in urban locations and the initiatives of the Ministry of Labour & Employment, Government of India, to promote inter-State MOUs etc. The NGOs, INGOs, Foundations and key private sector agencies too have done their part in ensuring education, crèche facilities, elimination of child labour etc.
The interventions for the protection of the rights of young migrants are present but lack uniformity and thus are very fragmented and scattered. No standardized procedure is followed to have an impact on overall development of children.
Therefore, it is of utmost importance to deliberate, plan and design meaningful and effective government programs, convergence mechanisms and policy on some of the critical issues affecting the migrant children. With so many children being affected by the process of migration, it cannot be handled in a piece-meal uncoordinated manner. There has to be a better convergence and robust inter-state coordination to protect the rights of these, especially vulnerable group of children. This was the rationale behind the interstate dialogue held on the 15th-16th January 2018 at Hotel Swosti Premium, Bhubaneswar. It is being organized by Odisha State Commission for Protection of Child Rights in collaboration with two key partners, UNICEF and Aide et Action in order to facilitate deliberation, planning, communication and interaction of three key govt. agencies namely Dept. of Labour, Dept. of Women & Child Development/Social Welfare and Dept. of School Education as also civil society organizations of nine states, both destination and source states to come out with a commonly agreed upon policy framework as well as realistic implementation strategies to enable these children to have a safe and secure childhood even when they and their families are on the move. The nine states are Andhra Pradesh, Bihar, Chhattisgarh, Jharkhand, Karnataka, Maharashtra, Odisha, Tamil Nadu and West Bengal. 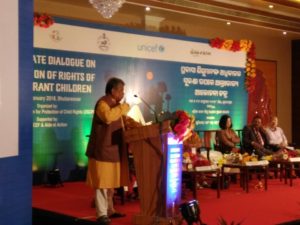 The inaugural session of the programme will be graced by Hon’ble Minister, W & CD, MS, MSME and SSEPD, Sri Prafulla Samal as the Chief Guest, Sri Subhash Singh, Chairperson, Odisha Building and Other Construction Workers’ Welfare Board as also Ms. Yumi Bae, Chief of UNICEF Odisha and Sri Mahendra Mallick, State Project Director, OPEPA will be the Guest of Honour. Welcome address will be given by Smt. Kasturi Mohapatra, Chairperson of OSCPCR.