Expression of essence of India not possible without Doordarshan and All India Radio: Union Minister Shri Amit Shah

Union Minister Shri Anurag Thakur while speaking on the occasion remarked that Doordarshan and All India Radio had done a commendable job of reviving the valiant stories of over 550 freedom fighters and enabling the acquaintance of the younger generations with these unsung heroes.

Speaking about the serial the Minister said that it is aimed at reimagining the vision behind the idea of swaraj and tell the stories of the leaders that moulded that idea into a reality. The serial is a manifestation of our pride in these heroes from the past. With satisfaction in his expressions the Minister stated that intense research had gone into making of the serial and information and documents have been collected from all the corners of the country to bring to life these stories from our freedom struggle.

Union Minister of Home Affairs and Cooperation Shri Amit Shah while speaking about the role played by the public broadcaster recalled the time stalwarts like Pandit Jasraj and Ustal Bismillah Khan had said that if it had not been for Akashwani, they would not have existed. He said “It is not possible to spread the expression of the essence of India without Doordarshan and All India Radio.”

The Minister deliberated on the meaning of celebration of Azadi Ka Amrit Mahotsav and said it is not just a celebration of our freedom struggle but also of the achievements of the past seventy-five years since independence, of the sacrifices of the sung and unsung heroes of our freedom struggle. This is also a time when we are visualizing the contours of the future of India and India is only going to attain greater heights of excellence from here, he added.

Swaraj is an intricate concept and Shri Amit Shah dwelled on the idea and said Swaraj is not just limited to the idea of self-rule. It is the process of governing the country in our own unique way and this includes own languages and own culture and till the time we cannot imbibe this all-encompassing idea of swaraj, India has not really achieved it. In the centenary year, it will be important to preserve our languages and pass on our historic legacies and our culture to the future generations, he added. 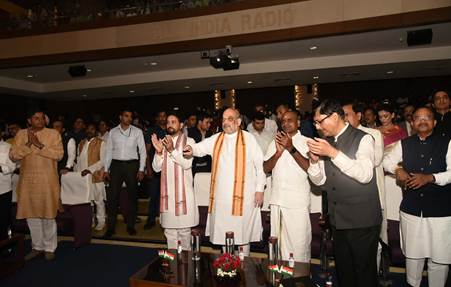 The Minister credited the crew behind the serial for their diligence. He said that from education to wealth, from culture to governance, historically India was much more advanced than the colonial powers, but a false narrative was manufactured about India and an inferiority complex created in the people. He said that the serial Swaraj will eliminate all inferiorities from the collective conscience of the people of the country.

Various Members of Parliament, Senior officials of the Ministry, Doordarshan and All India Radio news were present on the occasion.

Chief Executive Officer of Prasar Bharati Shri Mayank Agarwal said that the serial will be broadcast on Akashwani along with Doordarshan. Shri Agarwal expressed his gratitude to the members of the consultative committee behind the serial.

Swaraj is a 75-episode serial produced in 4K/HD quality and will air every Sunday from 9 to 10 pm on Doordarshan National from August 14. It is being dubbed in nine regional languages ​​along with English. The serial in regional languages Tamil, Telugu, Kannada, Malayalam, Marathi, Gujarati, Oriya, Bengali and Assamese ​​will be broadcast on Doordarshan’s regional channels from August 20. Starting from the landing of Vasco-da-gama in 1498 the serial presents a rich saga of the heroes of this land. This includes many unsung heroes of the likes of Rani Abbakka, Bakshi Jagabandhu, Tirot Sing, Sidhu Murmu and Kanhu Murmu, Shivappa Nayaka, Kanhoji Angre, Rani Gaidinliu, Tilka Majhi etc. along with famous freedom fighters like Rani Lakshmibai, Maharaj Shivaji, Tatya Tope, Madam Bhikaji Kama etc.

Ministry of Environment, Forest & Climate Change has released the Detailed…