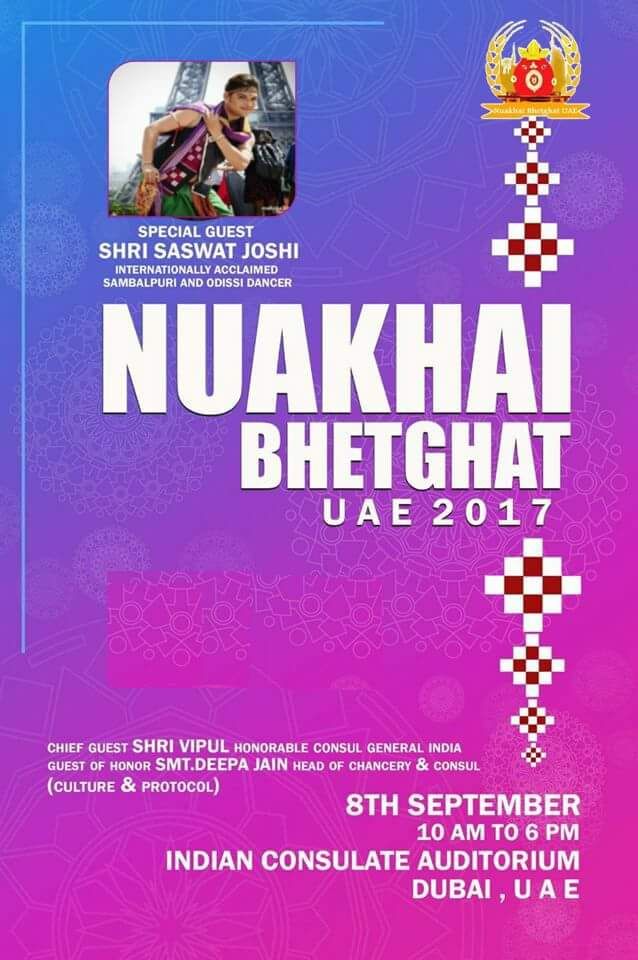 Dubai: The Western Odisha Parivaar of United Arab Emirates (UAE) is organising ‘NUAKHAI BHETGHAT – 2017’ on the 8th of September, 2017. It is being organised in the auditorium of the Indian Consulate in Dubai, (UAE). This year’s celebration is billed to be the World’s Biggest Nuakhai Celebration Outside India ’.
The Chief Guest at this year’s Bhetghat will be Shri Vipul, Honourable Consul General of India. Guest of Honour will be Smt. Deepa Jain, Head of Chancery & Consul (Culture & Protocol).
Special guest at this year’s function will be the internationally acclaimed Odissi and Sambalpuri dancer, Shri Saswat Joshi. Shri Joshi has popularised Western Odisha Culture, Music, Dance and Handlooms across the globe and this will be his first visit to the Middle East and North Africa Region.

The day long program will consist of cultural programs, folk dances, Nuakhai themed dramas, songs etc. These will be performed by Odia expatriates living in the UAE. An important aspect of the celebration is ‘Bhetghat’, when the members of the community greet each other, exchange pleasantries and other greetings. Celebrations and ‘Bhetghat’ will continue over the sumptuous lunch consisting of mouth-watering delicacies of Western Odisha.
In addition to this, attempts are being made to showcase the culture, music and dance of Western Odisha by inviting deserving artistes from Western Odisha to Dubai, so that they can showcase the best of the region on the World Platform. A 12 member cultural troupe will be specially flown in to perform in front of the multicultural crowd and exhibit the richness of our culture.
One of the highlights of the day would be the World’s First Multi Ethnic Exclusive Sambalpuri Fashion Show. Our women & men associated with Western Odisha will be walking the ramp along with models from other countries, showcasing the richness of Sambalpuri handlooms and designs. To see Sambalpuri designs adorning foreign nationals is indeed a happy moment, a moment which truly integrates our culture and handlooms with the world.
A special feature of this Nuakhai Bhetghat is the desktop calendar which is being made to showcase beautiful Sambalpuri handlooms & patterns. The calendar will have 15 pages for the fifteen months (from Oct, 2017 to Dec, 2018). This calendar is based on a unique concept – Each page will feature models from different nationalities like America, China, Philippines, Morocco etc. The pages depicting 15 months will have models from 15 (or more) different nationalities who will wear authentic Sambalpuri sarees and dresses and pose against UAE landmarks like the tallest tower in the world – Burj Khalifa, luxurious hotel – Burj Al Arab, iconic and majestic Sheikh Zayed Mosque (in Abu Dbahi) etc. This is probably for the first time such an attempt to popularise our handlooms, involving people of so many nationalities has been done. This calendar will surely become a colletor’s item and gain instant popularity across the globe.
‘Nua Dhan’ is being specially flown in from Western Odisha and will be offered to Goddess Samaleswari in the auditorium. In addition to this, traditional sweets like Aarisa, Dantri Khaja, Khir Gaja, Pheni & Boondi Ladu are being specially made in Sambalpur and sent to Dubai for the NUAKHAI BHETGHAT. 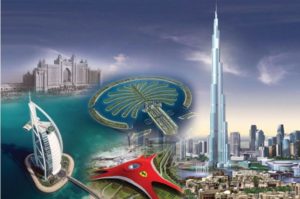 The Parivaar takes pride in the fact that is trying to popularise the rich culture of Western Odisha (widely exhibited through its language, music, dance, handlooms etc.) on a World stage and trying to bring it to a multicultural and multi ethnic audience, apart from promoting bonding and togetherness among its family members. Attempts are made to do all this without diluting the spirit of Nuakhai which is ‘Social Harmony’. It has been the Parivaar’s constant endeavour to give back to its motherland, by trying to invite celebrated artists, musicians etc. to the UAE so that they can showcase their richness to the World, to a much larger audience!