New Delhi : The Department of Drinking Water & Sanitation (DDWS), Ministry of Jal Shakti, under the Swachh Bharat Mission (Grameen) is organizing ‘Swachhta Run’ across rural India, to mark the World Toilet Day on 19th November, 2022. States & UTs have been directed to conduct the “Swachhta Run” at the Gram Panchayat (GP) level involving local heroes, Swachhagrahis’, ASHA workers, volunteers, youth, school children, and local folk artists etc. It was suggested to engage the local elected representatives/sports persons/celebrities/local influencers to flag off the “Run” to enthuse the local populace for participation. Undertaking ‘Swachhta Pledge’ by all participants at the start of the “Run”; display of banners, posters, slogans and other outdoor IEC materials of SBM(G) Phase II along the route, starting and ending the “Run” at a site of historical significance and/or the GP office itself; provisioning of refreshments, medical kits, T-shirts, participation certificate should be taken care by the GP – all these elements were also communicated to the states and UTs.

DDWS with NIC developed a dedicated e-module to monitor the Swachhta Run activities. The States & UTs will upload information about the location of the “Run”, dignitary flagging/attending the run, number of participants and images of the “Run” and brief write-up of the event was also obtained from the districts. A softcopy of the SBM-G IEC communication material, including notification about the “Run” was provided to the states through QR code, shared in a preparatory VC held with the States & UTs on 17th Nov’22.

This global observance, held annually since 2013, celebrates toilets and raises awareness for the people living without access to sanitation. The 2022 theme is ‘Making the Invisible Visible’ and explores how inadequate sanitation systems spread human waste into rivers, lakes and soil, polluting underground water resources. This problem seems to be invisible, as the water contamination happens underground. The special day is about highlighting actions to tackle the global sanitation crisis and achieve Sustainable Development Goal (SDG) 6.2: sanitation and water for all by 2030. Even though India has already achieved the SDG Target 6.2 pertaining to access to safe sanitation, when the entire county achieved ODF status in Oct 2019; it is persistent in its efforts to now achieve ODF plus status.

The Swachh Bharat Mission (Grameen) has been recognized as the world’s largest behavior change program. It represents the influential force of peoples’ participation -‘Jal Andolan’, that transformed the lives of rural India populace in terms of social benefits, economic gains, environmental safety and most importantly dignity and security to women. The second phase of SBM(G) focusses to build on this strong foundation of healthy behaviors and inform, educate and create action towards ODF plus. ‘Swachhta Run’ is one such action of engaging the masses for the same. The objective of the “Run” is to create awareness among people about importance of usage of toilet, safe sanitation and visual cleanliness aligned to SBM(G) phase II components.

‘Swachhta Run’ Being Organized Across Rural India On 19th November 2022 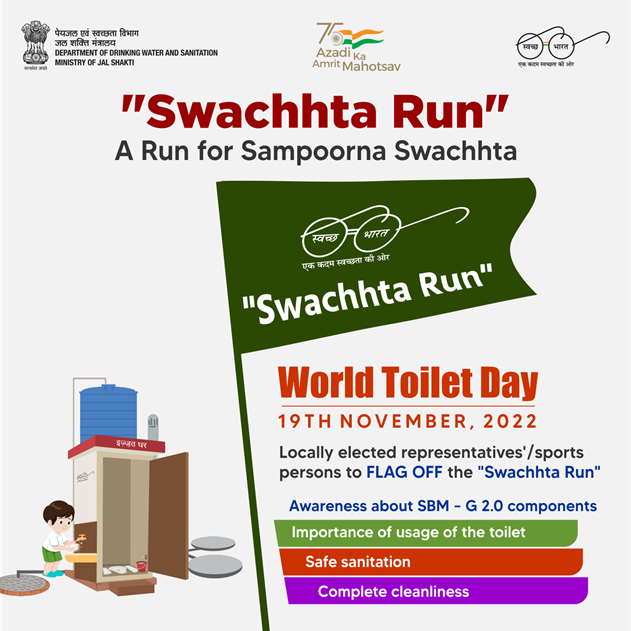 ‘Swachhta Run’ Being Organized Across Rural India On 19th November 2022