Women training, their empowerment one of priority areas of Govt of India: Union Minister Dharmendra Pradhan

Hyderabad: Vice President Shri M. Venkaiah Naidu, today, laid the foundation stone for Regional Vocational Training Institute, Hyderabad which is the first of its kind for the State of Telangana boosting skill development opportunities among women ready to contribute to the country’s workforce.
Shri Dharmendra Pradhan, Minister of Petroleum and Natural Gas and Minister for Skill Development & Entrepreneurship was also present during the foundation laying ceremony along with Shri Mohammad Mahmood Ali, Hon’ble Deputy Chief Minister, Govt. of Telangana, Shri Naini Narsimha Reddy, Minister of Home, Labour & Employment, Telangana and Shri Bandaru Dattatreya, Former Minister of State for Labour & Employment and Member of Parliament.
The competent authority has approved the expenditure of Rs. 19,95,90,000/- for construction of building for RVTI-Hyderabad. RVTI campus will be spread over approximately four acres of land with the campus of ATI-Vidyanagar, Hyderabad.
Once established in its new permanent building, around 1000 trainees would be trained here every year. This RVTI is expected to cater to the vocational training needs of 480 women annually in regular courses under Craftsmen Training Scheme (CTS) and Craft Instructor’s Training Scheme (CITS) and around same number of candidates would be trained under various short term courses in skill areas having a high market demand.
The courses identified to be run in this Institute are Fashion Design & Technology, Architectural Assistantship, Cosmetology, Front Office Assistant, Secretarial Practice (English), Food and Beverages Service Assistant. 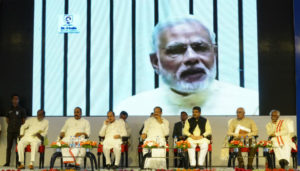 Laying the foundation stone of RVTI Hyderabad, Shri Venkaiah Naidu, Vice President of India said, “Setting up of RVTI in Hyderabad is one defining step towards women empowerment. It the duty of all government bodies including gram panchayat, to do everything possible to empower women in the society. I would like to congratulate and extend my best wishes to Ministry of Skill Development & Entrepreneurship for such a great job. Through skill development we will not only empower our own country and its industries but also contribute to economies across the world. There is a huge demand for skilled workforce world over and it is the right that we reap our demographic dividend and bridge this demand supply gap.”
Shri Naidu also said that the country is facing an acute shortage of trainer and teachers and under skill development initiatives, it is a delight to see that the country now had more avenues for training of trainers.
Addressing the gathering, Shri Dharmendra Pradhan, Minister of Petroleum & Natural Gas and Minister for Skill Development & Entrepreneurship said, “Women training and their empowerment has been one of the priority areas of Government of India. Participation of women in the workforce in our country will certainly lead to the growth of our nation’s economy. To ensure this, we have target of setting up one RVTI in each state. MSDE is presently running 17 such Institutes across India.”
“Skill training exclusively for women is being provided through the network of 11 Central Government Institutions and 1408 State Women ITIs and Women Wings in General ITIs. Besides this, 30% of the seats in general ITIs in most of the States are also reserved for Women. It is heartening to see the contribution made by all States, Departments and other entities to skill development in the country. People from Hyderabad support the manpower requirement all over the world. The launch of RVTI Hyderabad is our endeavour to empower the students in this city with more new age skills, so that they could earn a better livelihood along with their due respect,” he further added.
Shri Pradhan also mentioned that it is under Shri Bandaru Duttatreya’s esteemed guidance that we have been able to set this facility in such record time. He thanked the Minister for the huge contribution that he made in setting up of RVTI Hyderabad.
Under the leadership of Hon’ble Prime Minister, Ministry of Skill Development and Entrepreneurship (MSDE), through the National Skill Development Corporation (NSDC), has pioneered to establish Pradhan Mantri Kaushal Kendra (PMKK) in every district of India. From the venue, Hon’ble Vice President e-inaugurated and launched training at 5 PMKKs and dedicated these centres to the people of India. Five PMKKs which are e-inaugurated today from Hyderabad are located at Etah (Uttar Pradesh), Phulpur (Uttar Pradesh), Singrauli (Madhya Pradesh), Aligarh (Uttar Pradesh) and Dhar (Madhya Pradesh).
During the event, honourable Vice President handed over Recognition of Prior Learning (RPL) certificates and placement certificates to candidates who got placed in companies like Tech Mahindra & Accenture. Recognition of Prior Learning recognizes an individual’s skills through certification and enhancing their career opportunities.
Shri Naini Narsimha Reddy, Minister of Home, Labour & Employment said, “I am confident that RVTI Hyderabad will contribute extensively to the women students that we have here by making them more employable and job ready for the national and internal markets. Telangana has huge potential in its workforce and skill development will give them the right direction in their careers.”
Addressing the gathering, Shri Bandaru Dattatreya, Former Minister of State for Labour & Employment and Member of Parliament said, “Skilling is the need of the hour. Skilling not only increases the employability of the workers but also the productivity of the employers which leads to a cycle of increased production, increased revenue stream and increased GDP of the country. We are grateful to our Hon. Prime Minister for emphasizing the importance of skill development and allocating required resources for setting of this RVTI in Hyderabad.”