Barely 16 km away from Berhampur, the commercial hub of southern Odisha and close to the border of Andhra Pradesh, Gopalpur is a tiny town by the Bay of Bengal with an unique geography, interesting history and loads of myth. It is said that in ancient times it used to the point from where sailors from Odisha used to go to Java, Borneo and Sumatra for trade. History has it that it used to be a small fishing village till British East India Company constructed a port here to export cheap labourers to Burma (now Myanmer) and import rice.

It was during the last decade of 18th century that a French man called Loraine landed there, and he changed the fact and profile of Gopalpur. Why did  Loraine came to this tiny obscure village in Odisha? Oral history has it that Loraine was a noble man residing in France. Loraine always stood for a cause — to help the distressed. It was during the days of French Revolution and this attitude of Loraine was never appreciated. In fact, the French establishment tried to guillotine him. As the French authorities launched a massive manhunt for him, Loraine went into hiding. Fortunately, Loraine had an intimate friend, a captain in the East India Shipping Company, called G.G. F. Edwardo, who rescued Loraine and got him to Gopalpur.

Loraine after coming to Gopalpur found trading to be a lucrative business as the port provided all the infrastructure and opportunities he was looking for. The East India Company had built large warehouses because the trade with Burma had picked up and it had become a trading point for rice from Rangoon. Loraine joined the East India Shipping Company and was involved in exporting the cheap Bengali labourers to Burma. Capable and experienced as he was in the rules of the game, Loraine formed his own shipping company called Bengal India Steam Navigation (BISN). Loraine succeeded well in the business as he managed to export cheap labour along with spices and bidis from India to Burma. Loraine and his family became prosperous and bought lands and built several properties, mostly hotels, resorts and lodgings in Gopalpur-on-Sea. Gopalpur gradually emerged as an upmarket tourist destination with wealthy families from Bengal regularly visiting here and some building houses also for summer retreat.  After Odisha became a separate State in 1936 and the independence movement gained momentum, the British influence, especially the trading activities, in Gopalpur started declining and virtually came to a standstill during the World War II.

Gopalpur ceased to be a port town. However it continued to be a popular tourist destination for people looking for a quiet and relaxed holiday. Its proximity to Berhampur, a major railstation worked to its advantage.

I had been to Gopalpur many times in the last four decades. I have seen its rise as a tourist destination and now witnessing its fall and decay. Gopalpur used to be a tiny, sleepy and wide open town. It used to be sparsely populated. Now it has become crowded and dirty. The steps built some years ago- have lost its sheen and are pan-stained. Stray dogs and cows abound. The concrete figurines, installed for beautification are damaged and wear a shabby look.
The beach has become narrower with sea rising and moving towards the landmass. You can hardly walk on the beach now. The Jhau (Casuarina equisetifolia) trees which were one of prime attractions of Gopalpur are all but gone.
In the town- squalor and rubbish stare at you. Pigs play around merrily. Roads have become narrower with shabbily built houses occupying the road space.
Gopalpur is losing its charm.
The govt. of Odisha is trying to promote Odisha as a tourist destination. And here is an old seaside town, which used to be a popular tourist attraction is losing its charm. Big advertisements and roadshows in foreign countries will not attract tourists. Improving infrastructure and cleanliness is the foremost necessity. This is not just the case of Gopalpur town. Across the country several tourist places are losing its charm, its sheen.

In pre-independence days, as freedom struggle gained momentum- Kazi Nazrul Islam’s revolutionary songs were on every lip in Bengal. Nazrul, known as Bidrohi Kabi (revolutionary poet) was then more popular among the youth of Bengal than Rabindranath Tagore. 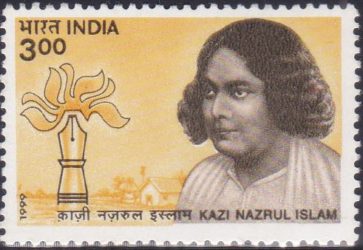 He served in British Army during the First World War and fought in the Middle East. But after returning to India he turned into a journalist and started writing against the British rule.

He was the first poet of Bengal to have been jailed for writing poetry- which was considered inflammatory in British ruled India. He was an iconoclast. He wanted to break the boundaries of religion. Many of his poems urge the masses to break shackles of tyranny and oppression and sing songs of liberty. He also wrote poems and songs depicting love and nature. Nazrul wrote and composed music for nearly 4,000 songs.

In 1942 at the age of 43, he began to suffer from an unknown disease, losing his voice and memory. It was later diagnosed as Pick’s Disease, a rare incurable neurodegenerative disease. It caused Nazrul’s health to decline steadily and forced him to live in isolation in India. He was also admitted in psychiatric hospital in Ranchi for many years.

Nazrul’s songs lived on. During the freedom struggle of Bangladesh- it became a tool for energizing the youth to fight for liberation. It was in 1971, Bangladesh was born and next year at the invitation of the Govt. of Bangladesh Nazrul and his family moved to Dhaka. He died four years later on 29 August 1976 in Bangladesh.