#whereisyourcottonbag? Decision to Ban Polythene is riddled with Challenges

Bhubaneswar: Govt of Odisha has decided to put a ban on single use plastic and polythenes from 2nd October 2018. The ban will be implemented in phases and municipal corporations namely Cuttack, Bhubaneswar, Roukela, Sambalpur, Berhampur and in Puri Municipality and entire Odisha will be covered in coming two years. This decision has evoked a feel good response among the conscious citizens and environmental activists, who have been demanding such ban since long. Soon many started campaign generating a pro government voice in social media just to create a mindset among citizens accepting ban. 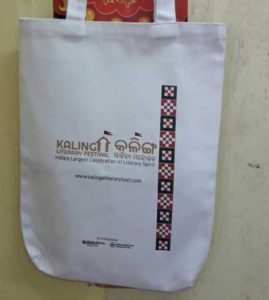 The ban decision even though is a welcomed step, needs to overcome many challenges before it is actually implemented on ground. Poor implementation of laws, lack of cheap and effective alternative to plastics, laxity in punishing the erring institutions dealing with banned plastics and people’s resistive mindset to abandon polythene are few of the major challenges that govt machineries have to ride on to ensure that the ban ordered is actually implemented in letter and spirit.
Our society is well accustomed to do the marketing with polythenes especially when you do the marketing without a plan. In those cases, abandoning polythene will not be that easy for the market goers. Even though jute, cotton bag etc are available in the market yet these are neither cheap nor easy to carry. Hence It will take time to adjust for people. “It is always difficult changing habits.But a good start is the stoppage of polythenes for carrying vegetables at the market yard.People have to get accustomed to carry their own jholas as it used to be in earlier days. The convenience of plastics definitely cannot be replaced especially for purchasing meat/fish, but the time has come to be aware and one now needs to carry their own dabbas/bags for the above purpose” said Ms. Neelima who has been actively running a social media campaign named plastic free July in which she talked about plastic menace and alternative solutions everyday during the campaign in the month of July
Even though 20 states have put a full ban and 5 states have put partial ban on the use of plastics and polythenes yet India accounts for 15,000 tons of plastic every day from major municipalities and corporation. This points out that even though laws and directives are put in place, yet they have failed to address the issue in total. Most of the time the law is made so complicated that depts. blame each other if they fail to address the same. Govt needs to ensure tight coordination between different line depts. in the absence of which the ban will not be fruitful.
“Lack of adequate trained manpower and inadequate devaluation of power are another major reasons for which polythenes are not completely off the shelf. The Pollution control board in Odisha is merely having 30-40 staffs in it. Hence it is difficult to keep a tab on polythene producing units. Until the power is devaluated to BDOs who can levy penalty and raid polythene units,godowns etc ,we will not see any quick improvement in situation. “said Mr. Jaya Krushna Mohapatra a noted environmental activists of the state. Cracking down on these units, is one of the major strategies which govt needs to do to ensure a blanket ban. It can take few months to ensure a complete ban only if Govt. regularly cracks down on these units added Mr Mohapatra
Citing Gutkhaban as an example Mr Rudra Prasanna Rath the online coordinator of #whereifyourcotton bag?,“ success of such act rest more on supply side intervention. Until Govt whips up the crackdown , the proposed ban will be of no significant use. Gutkha Ban was very fruitful in earlier days as Govt regularly raided shops but later it did not get success as govt loosened the noose. “If Govt does not come into action mode then,it will not be successful” he mentioned.
However, the good news is that citizens have geared up this time at least in social media to spread the awareness. Many campaigns and initiatives are around the corner to sensitize people to abandon plastic and use cotton or paper bas. This is creating a suitable environment in Odisha, which will smoothen the policy implementation on ground. A campaign named #whereisyourcottonbag? is largely getting support from citizens belonging to different walks of life and is getting media attention.