While everyone is welcoming the new year with new vibes amidst pandemic humming to the recreation of ‘Husn Hai Suhana’ from the movie ‘Coolie No. 1’, we simply caught the bright chance to interact with the voice behind the classic song Chandana Dixit and here’s what she has to say about it and her journey.

Narrating about her experience with both the original and remake version of ‘Husn Hai Suhana’, Chandana informs, “The makers just wanted to rerecord the musical part and not the entire song. They wanted to keep the vocals same. So I rerecorded the beginning part called ‘Mukhda’.

The original version of ‘Husn Hai Suhana’ never happened in such a wonderful and fancy way. This song is the first song of my life. Earlier I had been doing small recordings but I had never recorded for a movie before. Infact, I wasn’t even the chosen one for the song. I was eventually doing some recording in a smaller studio, and suddenly they required someone to dub a song which was supposed to be rerecorded by some bigger singer. I guess they were already done with the project and the song was a last minute requirment.
Everything was in so much hurry. They had this song recording going on and simultaneously, Govinda and Karishma were rehearsing to the song. They had their preparations going on so that as soon as the song gets completed they could start filming.
It was my first meeting with music director Anand Milind, and singer Abhijeet. So, the idea of the entire thing feels so precious.”

Then there was no looking back. Having started as a dubbing artist, Chandana has sung “Shahar Ki Ladki” (Rakshak), “Chumma Chumma” (Daanveer), “Tujhe Khaas Fursat” (Auzaar) and “Khul Gaya Naseeb” (Bhai). She has worked with music composers Anand–Milind and Anu Malik.

It’s been 24 years that Chandana has sung the original track and still retains the magic of her melodious voice as we can witness in her latest recreated version of “Husn Hai Suhana”.

Collecting the reminisces of childhood and early days, Chandana says, “It feels strange now that I never had held such aspirations. Because from kindergarten till a long period of time I was in Africa. There, we were the only Indian family with a Harmonium. My mother was a Sangeet Visharad. But she never took up music professionally, she just used to teach me in a very simplistic way. 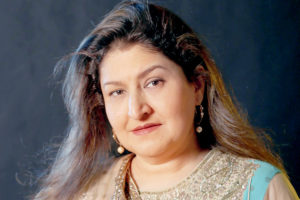 One memory of my childhood is my mother used to buy those LP records which we used to listen at that time. Another one is Lata ji’s song ‘Kya Yahi Pyaar Hai’ that I was hooked onto in childhood. That was not the age of YouTube so the period was not as prevalent as today. But I remember that one particular moment where I felt how magical this song is and that about bollywood has stayed with me since then. And when the time came to start learning music I trained myself in Hindustani Classical Music. I never that thought of singing in bollywood, I only wanted to learn and sing classical music.

‘Husn Hai Suhana’ happened in 1995 and in then ‘Sheher Ki Ladki’ came after a year. By that time I had sung some other songs. It was beautiful on the larger part because of the way it was picturised.”

Talking about remakes and recreations, she believes that anything that is well-done is worthwhile. So its important that it should be done with conviction, love, respect. “A feeling that you take a song and you create a nind with it in a meaningful way you make it sound contemporary. I feel in that case earlier songs used to reach people. Because the whole level of involvement was completely different. Recreations are more of a superficial level of what the original took. These are two aspects. But I also feel that at least in that way, the younger generation is getting to know and enjoy lots of our melodies which are of course our heritage, tradition and things that over the years have been built up. Also, I feel that kids of today’s generation do not like to hear anything they are unfamiliar with. So every generation feels comfortable with something they can relate with. That’s why from melodies to movies, everything is being re-presented newly,” she opines.

She comments on her social media visibility by saying, “I am not a social media savvy person. Infact, I have just started with it. I feel that these new things are needed to be learnt and understood.”

Chandana is currently working on few independent projects. “There are few bollywood projects which are currently on hold due to Covid 19. Hopefully the independent works will come out sooner. Independent works give an individual artist a validation to explore new domains on self ability.”

Giving a heartfelt advice to upcoming musicians, she concludes by saying, “Be yourself. Don’t follow anyone, any style and be comfortable with whoever you are. While we aspire on becoming somebody else, that makes us uncomfortable and we miss out on who we are.”