New Delhi : The United Nations (UN) has recognized Namami Gange initiative to rejuvenate India’s sacred River Ganga as one of the top 10 World Restoration Flagships to revive the natural world. The Award was received by Shri G. Asok Kumar, Director General, Namami Gange at a function in the 15th Conference of Parties (COP15) to the Convention on Biodiversity (CBD) in Montreal, Canada on 14th December 2022, the World Restoration Day. Namami Gange was selected from over 150 such initiatives from 70 countries across the globe. They were selected under the banner of the United Nations Decade on Ecosystem Restoration, a global movement coordinated by the United Nations Environment Programme (UNEP) and the United Nations Food and Agriculture Organization (FAO). It is designed to prevent and reverse the degradation of natural spaces across the planet. The recognized initiatives, including Namami Gange, will now be eligible to receive UN support, funding or technical expertise.

Director General, Namami Gange, Shri G. Asok Kumar said “The recognition of Namami Gange as one of the top-10 ecosystem restoration initiatives in the world bears testimony to the concerted efforts being made by the National Mission for Clean Ganga, Government of India for the restoration of the riverine ecosystem. I hope that our endeavours provide a roadmap for other similar interventions across the globe.”

Shri Kumar also participated in a session in Montreal, Canada, organised by the UN Decade on Ecosystem Restoration Youth Task Force during the occasion. Expressing his gratitude on behalf of 1.35 billion people of India and Prime Minister Shri Narendra Modi, Shri Kumar thanked the World Restoration Forum, United Nations Environment Programme (UNEP) and Food and Agriculture Organization for giving the honour to India by selecting Namami Gange in the top 10 restoration programmes. “This has come at a very opportune moment for us as India has taken over the Presidency of the G20 group of nations. While taking over the Presidency, our Prime Minister reinforced his commitment for the protection of environment ‘One Earth One Family One Future’ in the true spirit of Vasudhaiva Kutumbakam.”

He informed that Namami Gange Programme was started in 2014 after Shri Narendra Modi took over as the Prime Minister after recognizing the need to rejuvenate River Ganga and committed over 5 billion dollars to ensure that the river gets clean. “Ganga is important for India as it is home to 40% of India’s population, 2500 species of flora and fauna and 8.61 billion sq. km. basin, which is home to over 520 million people. Ganga is also very important from spiritual point of view,” he said, adding, “It is closely associated with our tradition and civilization and symbolized the faith, sentiments and collective consciousness of the people of India.”

Shri Kumar said that NMCG adopted a holistic and multi-sectoral approach, which introduced innovative models for comprehensive conservation of the riverine ecology and its health. “Our projects are designed to ensure that no untreated water- sewage or industrial effluent flows to Ganga River. 176 STPs with capacity to treat over 5000 Million Litres per Day are being constructed. The concerted efforts of the Mission have resulted in significantly enhanced capacity for treatment of sewage and industrial effluents in the Ganga basin; improvement in river water quality and biodiversity, manifested as increased population of Dolphins and its juveniles, Turtles, Otters, Gharials and fishes like Hilsa; and over 30000 hectare afforested among others,” he added.

The DG, NMCG further said that an integral component of Namami Gange is Arth Ganga for strengthening the socio economical- river people connect. This has transformed the Mission into a Jan- Andolan or people’s movement. With many innovative project management practices like HAM and One City One Operator successfully evolved, NMCG is preparing the road map for cleaning other rivers in the country and world.

The DG asserted that the Namami Gange programme is driven with full commitment from our top political executives, which is essential for the success of such a large-scale environmental restoration programs. The unwavering commitment to the Namami Gange program is such that it is closely monitored by the National Ganga Council chaired by the Prime Minister Shri Narendra Modi himself and regularly reviewed by Shri Gajendra Singh Shekhawat, the Union Minister for Jal Shakti. “The gifts received by Hon’ble PM is annually put to public auction, all proceeds of which is given to the Clean Ganga Fund specially set up to encourage public contribution in Government’s endeavor to clean river Ganga,” he added.

Speaking on the importance of connecting with youth for the programme, he said: “India is the youngest country with largest young population and we have to connect with the youth and women to ensure that the problem of bad water management is addressed.” He added that youth and women in India today are aware of the water security issues and are being taught to respect water. “If we can get the youth to respect water, it will automatically stop misuse and mismanagement of our water resources.” He said that recycling of water is being pushed very hard as part of the circular economy and steps are being taken conserve biodiversity and protect spring sheds etc. “The youth are engaged in diverse activities through trained volunteer cadres like Ganga Praharis, Ganga Doots, Ganga Quest etc. who through sheer passion have joined us in protecting the biodiversity of River Ganga. The rescue of Dolphins by these volunteers in the Ganga Basin is a case in point which has resulted in increased sighting of the aquatic species in the river,” he said.

Shri Kumar added that various activities like rafting expedition, cyclathons, hackathons, webinar on ‘Igniting Young Minds: Rejuvenating Rivers’ are taken up to rope-in the younger generation and said that under Namami Gange we are aware of the necessities to involve people, particularly youth, in the process. He concluded by saying that Namami Gange is not just an inspiration for us but also a humble offering to Mother Ganga for environment protection and restoration in our endeavor to leave behind a better world for the youth of today and next generation.

UNEP Executive Director Mr. Inger Andersen said: “The Namami Gange is an ambitious effort to rejuvenate the Ganga, a lifeline for millions of people in India. At a time when it is critical that we transform our exploitative relationship with nature, the positive impacts of this restoration cannot be underestimated.”

Mr. Qu Dongyu, Director General of the Food and Agriculture Organization (FAO) of the UN, said: “FAO, together with UNEP, as co-lead of the UN Decade on Ecosystem Restoration, is pleased to award the 10 most ambitious, visionary and promising ecosystem restoration initiatives as 2022 World Restoration Flagships. Inspired by these flagships, we can learn to restore our ecosystems for better production, better nutrition, a better environment and a better life for all, leaving no one behind.”

The announcement was made as the leaders from across the globe gathered in Montreal, Canada for the UN Biodiversity Conference, where governments agreed to a new set of goals for nature over the next decade. The National Mission for Clean Ganga (NMCG) has previously won the “Public Water Agency of the Year” in the Global Water Awards, 2019 by Global Water Intelligence 3. The documentary ‘Ganga: River from the Skies’ co-produced with National Geographic India, received awards under 3 categories- Best Documentary, Best Current Affairs and Best Natural History or Wildlife Programme- in the Asian Academy Creative Awards, 2022.

DG, NMCG Receiving Award At A Function In 15th Conference Of Parties To The Convention On Biodiversity In Montreal, Canada 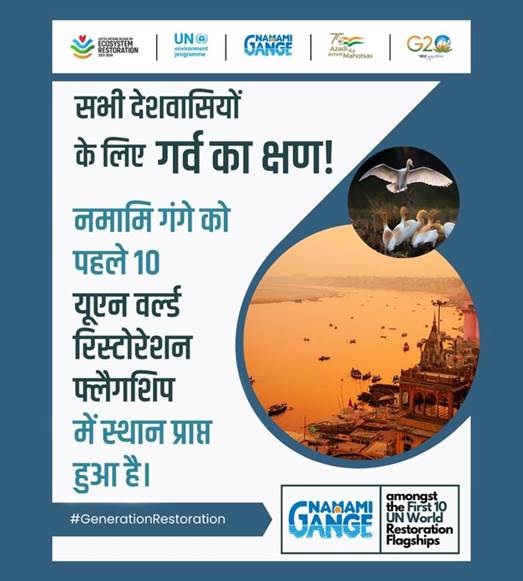