“India is proud of Yoga; World is proud of Yoga”, said the Minister, addressing a crowd of over 3000 yoga enthusiasts who attended the Majestic Yoga Day Celebrations at Pattadakal Temple Complex. Yoga symbolizes love, compassion and kindness, that are all the more relevant in today’s world. New India inspires the world with its Cultural ethos of Vasudhaiva Kutumbukam he added.

The Minister remarked “Yoga is India’s Gift to the World”. The International Yoga Day was first celebrated in the year 2015 subsequent to its adoption by the United Nation in 2014.  In 2015, 36K people participated in International Day for Yoga(IDY); in 2021, 15 cr. people participated globally. “This is the power of yoga, this is the power & influence of Indian culture. Our PM Sh. Narendra Modi has not only made the world proud of yoga but has made the world an active proponent & advocate of yoga”, affirmed Rajeev Chandrasekhar

With “Yoga for Humanity” as the theme, IDY 2022 focused on “Brand India at Global Stage” while it showcased its iconic places. IDY 2022 was distinct in nature as it was celebrated across the world with “Guardian Ring” concept, where in different Indian Missions abroad performed mass demonstration of yoga along with the movement of the sun. The glimpse of celebrations was also telecasted over DD India.

Pattadakal in Karnataka is one of the iconic locations selected among 75 iconic locations selected for celebration of IDY – 2022. This iconic place is located in the district of Bagalkote on the bank of the river Mallaprabha in North Karnataka and is a world heritage site of UNESCO. Pattadakal being a world heritage site with group of monuments was an ideal heritage/iconic location for harmonious celebration of IDY 2022 which showcased Karnataka’s rich cultural heritage and Diversity to the World.

The IDY 2022 at Pattadakal was organized by Software Technology Parks of India (STPI), Ministry of Electronics and Information Technology (MeitY). The event was led by Union Minister of State for Electronics, Information Technology, Entrepreneurship and Skill Development, Shri. Rajeev Chandrasekhar with the presence of other dignitaries from the Bagalkote District. The two hour celebration also had the streaming of main event of IDY 2022 which was celebrated at Mysuru Palace, Karnataka and led by the Hon’ble Prime Minister Shri. Narendra Modi.

The event was started with lamp lighting by Shri Rajeev Chandrasekhar and other dignitaries followed by invocation. Shri Arvind Kumar, DG, STPI kicked off the event with his welcome note and highlighted that as IDY 2022 is part of Azadi ka Amrit Mahotsav year, it is being observed at 75 iconic sites across the country besides 75 locations across the world with Guardian ring concept. He also urged the participants not to limit yoga to one day and adopt yoga in everyday life.

Shri P C Gaddigoudar, MP, Bagalkote during his address thanked Hon’ble PM and Government of India for choosing historic locations Mysuru and Pattadakal in Karnataka for celebrating IDY 2022. He called upon and encouraged students to include yoga in their everyday routine and to lead a happy life. He also thanked all the organizers for organizing the event in such a large scale. 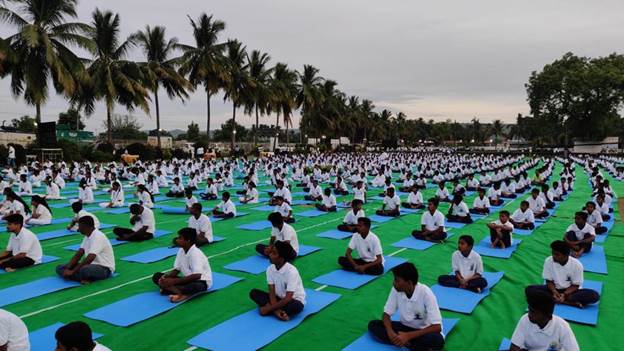 Yoga is a priceless gift to the entire humanity: Union Minister of State Shri Ashwini Choubey