New Delhi : The Union Home and Cooperation Minister, Shri Amit Shah attended the National Conference of Agriculture and Rural Development Banks (ARDBs) as the Chief Guest, in New Delhi today. On this occasion, the Union Minister of State for Cooperation and North Eastern Affairs Shri B.L. Verma, Secretary, Ministry of Cooperation,  President of NCUI and Chairman of IFFCO Shri Dileep Sanghani, President of International Cooperative Alliance – Asia-Pacific Region and Chairman of KRIBHCO Dr. Chandra Pal Singh Yadav and many other dignitaries were present.

On this occasion, the country’s first Union Minister of Cooperation said the dimension of cooperatives is very important for agricultural development and without this we cannot fulfill Prime Minister Narendra Modi’s vision of doubling farmers’ income. The history of Agriculture and Rural Development Banks in India is almost nine decades old. Agricultural credit has two pillars, short term and long term. Before 1920, the agricultural sector was completely based on aerial farming, when rains came, there was a good harvest. In the 1920s, the introduction of long-term loans to the farmer began, which led to the realization of the farmer’s dream of creating infrastructure for agriculture in his farm. Only and only the Agriculture and Rural Development Banks worked to change the country’s agriculture from being luck  based to becoming labour based. At that time, this dimension of the cooperative sector made a major start in the direction of making the farmer self-reliant. Shri Shah said that if we look at this journey of the last 90 years, then we see that  we have not been able to reach the bottom most level of the agriculture and farming system. He said there are many obstacles but unless and until long-term financing is not increased, agricultural development is not possible according to the vision of the Prime Minister. There are many large States where banks have collapsed and this aspect also needs to be considered. Diverting surplus funds towards non-agricultural use does not serve the purpose. The objectives of NABARD are fulfilled only when all available money is spent on rural development and agriculture. But this is not possible unless we promote long term finance, infrastructure and micro-irrigation in agriculture.

Shri Amit Shah said the job of agriculture and rural development banks is not just to finance, but to expand activities. Whatever obstacles are there in expansion of work, we have to find ways and then only will we be able to achieve the goal of agricultural development. He said that we should not only run banks but also try to work towards the fulfilment of the objectives of banking. Co-operatives were set up to achieve the objective of long term finance. By creating new cooperative societies, medium and long term loans have to be provided to farmers. 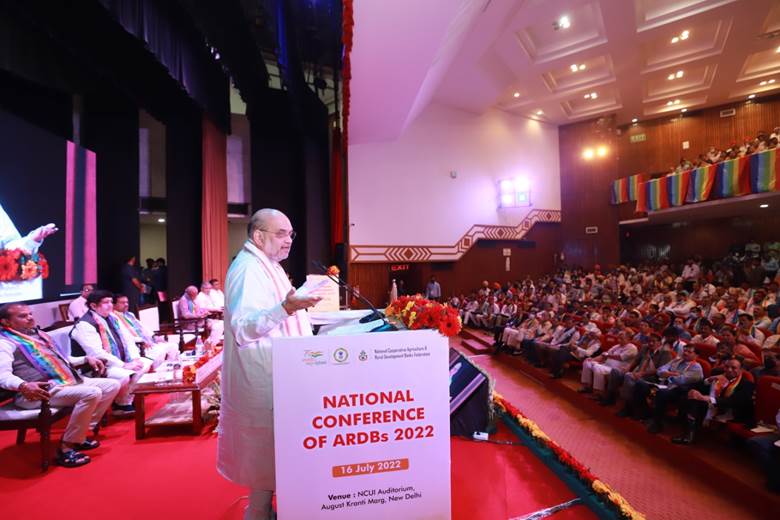 The Union Home and Cooperation Minister said speedy loans will also have to be provided as well as   recovery of loans. Services will also have to be expanded, dialogue will have to be undertaken to increase the percentage of irrigated land, yield, production, make farmers prosperous and bring awareness amongst farmers. He said that it is not enough just to hold a postion in an institution in cooperatives, but it is necessary to worry about what one can do during ones tenure, to achieve the purpose for which these services have been started since 1924. He said these banks have financed more than three lakh tractors, but there are more than 8 crore tractors in the country. We have given medium and long term finance to about 5.2 lakh farmers out of 13 crore farmers. Many new reforms have been undertaken by banks which are welcome but reforms must not be bank specific, they should be for the entire sector. If a bank does a good job, then it is the job of the federation to inform all banks about this and take it forward. Bank specific reforms cannot change the sector, but if reforms take place in the sector, then the sector will automatically change and if the sector changes, then the cooperative will become very strong. Many areas like wells, pump sets, tractors, land development, horticulture, poultry, fisheries are included in the work cooperatives undertake, but it is our responsibility to expand them and we have to move them forward, then the purpose with which a cooperative unit was established for will be achieved. Members of all banks who are attending this conference today, should also discuss best practices of the sector, if any reforms or changes are needed to bring in  new diversification within the banking sector, the doors of the Ministry of Cooperation are open for you 24×7.

Shri Amit Shah said that especially in agriculture finance, whether short-term or long-term, the country has become paralyzed in a way. In many places the activity goes on very well, but in many States it is very scattered. We have to revive it and the helpless farmer who has become the victim of inadequacy has to be taken on the path of economic development through proper handholding by the cooperative sector. There is no dearth of capital but our financing system and our infrastructure have collapsed, they have to be revived and every state bank will have to identify such areas in their State. He said that I would like that NABARD should also form a wing of extension and expansion in this direction, so that farmers who want medium and long term finance can get such finance. The need of the hour is to make institutional coverage adequate. He said long term finance should always be more than short term finance; only then will the sector develop. The higher the long term finance, the better the system will be and the short term finance will automatically increase. 25 years back we had 50 percent of long term finance and after 25 years this share has come down to 25 percent, we should worry about this development. In Assam, Maharashtra, Madhya Pradesh, Orissa, the entire infrastructure has collapsed. At present, only 13 States have agricultural and rural development banks running relatively in line with the expectations of the government.

The Union Cooperation Minister said the country is seventh in the world in the availability of agricultural land and in terms of agricultural activity we are second only to America. That is why  NABARD was established. If we make 39.4 crore acres of land completely irrigated, then the Indian farmer will be able eradicate hunger not only in the country, but  also in the world. But if it has to be irrigated and there is a shortage of water, then we have to go towards the micro irrigation system and if holdings have become small, then we have to irrigate them by taking help of cooperative societies. He request that banks should be revived and the government, NABARD and the Federation should work on this. In the coming days, I am also going to convene a joint meeting of NABARD, the Federation and the  Department of Cooperation on how to create a strong system of long term finance in each State. For this the federation will also have to play its role.

Shri Amit Shah said that under the leadership of Prime Minister

Narendra Modi, the Ministry of Cooperation Department has taken many steps. A very big step has just been taken that all PACS will be computerized at a cost of  Rs. 2,500 crore. PACS, District Cooperative Banks, State Cooperative Banks and NABARD will go online for accounting and this will help in running PACS with transparency. It will be of great benefit. We have also taken an in-principle decision to set up a cooperative university in terms of training as well. At present, all units with a turnover of more than Rs. 100 crore will be able to buy on the GEM platform. With this our procurement will also be cheap, there will be transparency and corruption will  be stopped. There is no cooperative database in the country and unless there is a database, one cannot think of expansion. We do not have any database of how many coastal States do not have fishermen’s cooperative societies. We do not have any database on how many cooperatives are working in the country. There is also no database of how many villages are deprived of the benefits of PACS. We have also started the work of creating this database and it is going to be a huge benefit. Expansion can happen only when one knows where expansion is to be done. Basic work has also been started by the Ministry of Cooperation, Government of India. The government has sent model bye laws of PACS and I request all the activists associated with the cooperative movement that you must send us  your suggestions with your practical experience for the preparation of the model bye laws of PACS. We want to make PACS multi-functional. They can take the work of  gas distribution, storage, can take shops for cheaper grains, can also take petrol pumps, can also become FPOs, can also become communication centres, can also distribute water from taps. When computerized, then a system will also be created to include all these dimensions. But if it has to be made multi-dimensional, multipurpose, then the model bye laws made 70-80 years ago will have to be changed. We do not have to reduce the element of cooperatives in them, but we have worked to add the new activities that can be added to PACS.

The Union Cooperation Minister said Amul is also doing primary work for marketing of natural farming products. We have also thought of forming a multi-state cooperatives for marketing of handicrafts. IFFCO and KRIBHCO have been given responsibility for seed reform, a multistate cooperative export house will also be established for export and the Government of India is taking an initiative and before August 15, we will work to take it to the ground. Shri Narendra Modi has also approved a large increase in the budgetary allocation of the Cooperation Ministry.

Shri Amit Shah said the government led by ShribNarendra Modi has done a lot of work in agriculture. Out of these, I definitely want to speak about MSP. Paddy procurement has increased by about 8 percent, earlier in 2013-14, 475 lakh metric tonnes of paddy was procured, today 896 lakh metric tonnes of paddy is procured and  beneficiary farmers have increased from 76 lakhs to 1.31 crore. Wheat procurement has increased by 72 percent, earlier used to buy 251 lakh metric tonnes and today it is 433 lakh metric tonnes.  Kisan Credit Card, promotion of organic farming, promotion of natural farming, export of agriculture has crossed US $ 50 billion for the first time, 64 lakh hectares of land has been increased in just 8 years under Pradhan Mantri Krishi Sinchai Yojana compared to the earlier 64 lakh hectare in last 70 years. As the government’s investment in agriculture infrastructure increases, so does the potential of  cooperatives, especially  cooperatives in agriculture finance. Mechanization of agriculture has also started, a budget of about Rs. 6,800 crore has been spent on 10,000 FPOs and digital transactions have also increased to a large extent in mandis.