Funded by the Union Ministry of Science & Technology at a budget of Rs.130 crore, the “Technology Innovation Hub on Autonomous Navigation” is a multidisciplinary initiative, which will make India a global player in the futuristic and next generation “Smart Mobility” technology”.

Dr Jitendra Singh keenly listened to the experience of the young Startups, engaged in unmanned vehicle navigation projects and suggested that they should be linked with industry for further sustenance and growth.

The Minister also appreciated that IIT Hyderabad has established a new Post-Graduation course of M.Tech in “Smart Mobility”, which is the first-of-its-kind in India. He said, he was glad to know that the Ministry of Science & Technology has played a role in promoting this visionary and futuristic initiative in India, which is going to be of global relevance in the years to come.

The Minister said, the vision of TiHAN-IITH, is to become a global player for next generation smart mobility technologies and the Ministry of Science & Technology has come forward to support this initiative, which will be a trendsetter for others as well.

Dr Jitendra Singh informed that limited testbeds or proving grounds exist worldwide to investigate the operation of unmanned and connected vehicles in a controlled environment by simulating various scenarios that may occur in real-life traffic operations, ranging from frequently occurring to extreme cases. A few examples include Millbrook Proving Grounds in the UK, M-City in the USA, CETRAN in Singapore, K-City in South Korea, JARI in Japan, etc. In India, there is presently no such testbed facility for assessing autonomous vehicle performance, and hence the need for this TiHAN Testbed, the Minister added. 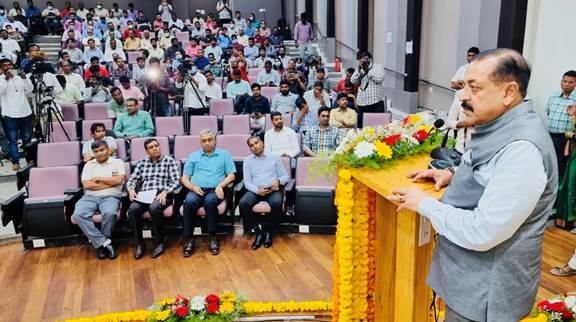 Dr Jitendra Singh said, India’s mobility sector is one of the world’s largest markets and the TiHAN – IITH will be the source of futuristic technology generation for autonomous vehicles. He also added that the TiHAN-IITH testbed on Autonomous Navigations (Aerial & Terrestrial) will allow us testing the next generation autonomous navigation technologies accurately and allow faster technology development and global market penetration.

Dr Jitendra Singh reiterated that the nation has progressed a long way technologically under the leadership of our visionary Prime Minister Narendra Modi and many programs have been launched to make India a leader and destination for futuristic technologies. One such initiative is the setting up of 25 technology innovation hubs by the Department of Science and Technology (DST) across the country under National Mission on Interdisciplinary Cyber Physical Systems (NM-ICPS).

The Minister said, specifically, TiHAN is developing and deploying a real-time CPS system utilising autonomous UAVs and ground/surface vehicles for many application sectors of the national importance of this decade. He said, this testbed includes simulation platforms that allow for non-destructive testing of algorithms and prototypes.

Also, several real-world scenarios can be emulated on the testbed. In terrestrial systems, a few examples of these scenarios are Smart Cities, Signalised Intersections, Autonomous Vehicle Interactions with Cyclists and Pedestrians, Wireless Networking among vehicles and Road-Side Units, etc. The autonomous vehicle testbed also provides dummy signboards, pedestrians, overpasses, and bikers to test all real-world conditions.

Secretary, Department of Science and Technology, Dr. Srivari Chandrasekhar informed that the testing facility also includes an airstrip, soft landing area, hangar for keeping drones, a Ground control station (GCS), Telemetry Station for Performance Evaluation. Performance evaluation of Payloads such as LiDAR, radar, camera, etc., is being evaluated. Control transition between manual and autonomous operation, and studies on public acceptance of driverless vehicles. The standard operating procedures for unmanned vehicles, will significantly aid in formulating the regulations and operating policies for different applications in the Indian scenario.

Under this national mission, IIT Hyderabad has been awarded the Technology Innovation Hub in the technological vertical of ‘Autonomous Navigation and Data Acquisition Systems (UAVs, ROVs. etc.)’. NMICPS Technology Innovation Hub on Autonomous Navigation Foundation (TiHAN) is a multi-disciplinary initiative, including researchers from Electrical Engineering, Computer Science and Engineering, Mechanical and Aerospace Engineering, Civil Engineering, Mathematics, Design, Liberal Arts and Entrepreneurship at IIT Hyderabad. TiHAN is recognized as a Scientific and Industrial Research Organization (SIRO) by the Department of Scientific and Industrial Research.

Outcome of the Eighth Biennial Meeting on the UN Programme of Action to prevent, combat and eradicate illicit trade & International Tracing Instrument for illicit small arms and light weapons