Union Minister Dr Jitendra Singh says, taking a cue from Prime Minister Shri Narendra Modi, all of us should unhesitatingly speak and work in Hindi

Presiding over the joint meeting of the Hindi Salahkar Samiti for Ministry of Science and Technology and the Ministry of Earth Sciences, Dr Jitendra Singh said, after the direction of Prime Minister Narendra Modi, the meetings are happening at regular intervals with measurable and visible outcomes.

The Minister also suggested that the meetings of the Hindi Salahakar Samiti Sub-committees constituted on his suggestion should be held every third month with selected theme and later on the review meeting should take into account the outcomes of such meetings.

He also asked the members of the Committee to suggest some good experts who can be engaged by the Science Ministries for quality translation of Science Journals, Magazines and other documents.

Shah called the initiative a moment of “renaissance and reconstruction” for the education sector in India.

Pointing out that languages bind people, never break them away unless they are forcibly implemented, Dr Jitendra Singh said, all of us should relentlessly work both for mother tongue and the official language Hindi, and should make an endeavor to learn more languages.

Dr Jitendra Singh said that he will take the issue of non-continuation of Hindi Teachers in North Eastern States, which were appointed at the behest of former Prime Minister Atal Bihari Vajpayee. He said, a large number of youth from the region are working in the Tourism and Aviation Sectors and the knowledge of Hindi has helped them secure the jobs. 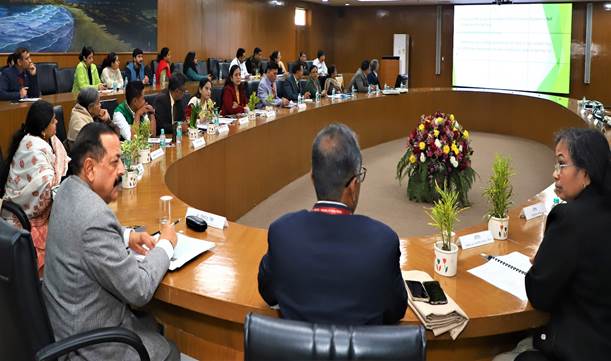 The Minister observed, when the language is linked with jobs or vocations, it finds its own path of growth and development.