Delivering the Keynote Address on the occasion of 148th Foundation Day of India Meteorological Department (IMD) here, Dr Jitendra Singh took pride in the fact that under Prime Minister Narendra Modi Government, IMD has taken pro-active steps to increase the Radar Network from mere 15 in 2013 to 37 in 2023 and will add 25 more in next 2-3 years.

Dr Jitendra Singh informed the Chief Ministers of Himachal Pradesh and Uttarakhand and LG of J&K, who joined the event virtually that IMD has augmented Doppler Weather Radar network in HP, Uttarakhand, Ladakh and J&K which will help further to predict extreme weather events more accurately.

DrJitendra Singh dedicated 4 Doppler Weather Radar Systems to the Western Himalayan States of Jammu and Kashmir, Uttarakhand and Himachal Pradesh. He also dedicated 200 Agro Automated Weather Stations to the Nation. The Minister also released eight publications of the IMD and gave away awards to school children and also felicitated the best performing offices and officers of IMD.

The Minister pointed out that the warning and advisory services are helping farmers and fishermen to improve their economy as found from a latest survey by National Centre for Applied Economic Research. For example, the investment in monsoon mission programme has resulted in return of 50 rupees for investment of each one rupee.

The Minister further added that the farmers below the poverty line specially have benefited immensely as Agromet Advisories at District and Block Levels are used effectively by crores of farmers during various stages of farming and the service is being expanded. The web GIS services launched by IMD last year have been augmented further with addition of hazard and vulnerability element in collaboration with other state and central agencies is helping the public, disaster managers and stakeholders to initiate timely response action to mitigate the disasters further, the Minister noted.

Dr Jitendra Singh said, Climate Services are very important for short and long term planning and strategy development and IMD has already initiated these services in five major thrust areas of Agriculture, Health, Water, Energy and Disaster Risk Reduction and has lined up plans to expand them through customization of products. He said, soon a National Framework will be created on priority to provide climate products and information for Sectoral applications.

DrJitendra Singh appreciated IMD for continuously redefining its focus for accurate Prediction of weather including monsoon and cyclones as our GDP is still largely dependent on agriculture. He noted with satisfaction that there has been significant improvement in forecast accuracy of various severe weather events including tropical cyclones, heavy rainfall, fog, heat wave, cold wave, thunderstorm etc. He particularly noted that the forecasting of monsoons that are lifeline to our food security has resulted not only in improvement of economy but also reducing the loss of lives due to monsoonal floods and droughts in south Asian region.

Dr Jitendra Singh underlined before the dignitaries that the accuracy has increased by about 20-40% for different severe weather events forecast during last five years. He said, taking a cue from Prime Minister’s Whole of Government Approach, the Weather Department is making best use of Space based observation of INSAT-3D and 3DR, OceanSat satellites for prediction of other weather events. The radars and satellite data processing system launched last year is adding feathers in the cap of IMD to carry out its responsibilities with full accuracy, the Minister added.

Elaborating the impact of forecasting on human lives, Dr Jitendra Singh said, it has succeeded in minimizing loss of lives from

various extreme events like cyclone, heavy rain, thunderstorm, heat wave and cold wave etc. in the recent years with its precise forecasting and timely warnings. He added that the loss of lives has been reduced to single or double digit figures due to cyclones and heat waves due to the response action by the disaster managers, general public and stakeholders under the umbrella of National Disaster Management Plans, guidelines, SOPs introduced by the present Government. He also appreciated IMD for commencing impact based weather forecast and risk based warning at city and district-level considering hazard, vulnerability and risk assessment in a geo-spatial platform. The vulnerability atlas and web-GIS platforms are being used for extreme weather monitoring and forecasting, he added.

Dr Jitendra Singh said, it is quite befitting to place on record that when India has assumed Presidency of G-20 in 2023, the IMD has also started to put its mark on Regional and Global Weather Eco-System. He mentioned that IMD has made significant contribution to global safety and economic development by acting as Regional Centers and Global Centers for weather and climate forecasting.

The Minister was happy to note that the recently introduced Flash Flood Guidance in 2021 has been augmented further by increasing the number of watersheds from 30,000 to 1,00,000 of the country in 2022. It is being provided every 6 hours to Nepal, Bhutan, Bangladesh and Sri Lanka apart from our national use.

Shri Sukhvinder Singh thanked IMD for this initiative and requested Dr Jitendra Singh to provide one more DWR system at Lahaul-Spiti, which is country’s 2nd largest District and suffers from frequent cloud-burst incidents. He said, with today’s inauguration, 70 percent of the State will be covered, but the remaining 30 percent will be taken care of if DWR is given to Lahaul-Spiti, which has not only snow, glaciers and rivers, but also strategically important as it is close to China Border touching J&K and Ladakh.

Shri Sukhvinder Singh told Dr Jitendra Singh that soon he will come to Delhi to sit with him and senior officials of IMD and Ministry of Earth Sciences to find out ways for accurate weather prediction, particularly temperature in Hamirpur, Bilaspur and Una.

Dr Jitendra Singh and Shri Manoj Sinha,LG, UT of Jammu and Kashmir jointly inaugurated DWR at Banihal Top, with a range of 100 kilometers. Shri Sinha said, the system will go a long way in augmenting and helping the Agriculture and Allied Sectors and Tourism which are then mainstay of economy of Jammu and Kashmir.

Shri Sinha Said, the DWR will help the people of both the Jammu and Srinagar region to get the accurate weather information and it will add a new dimension in the making of a Naya Kashmir. He said, IMD forecasts are not only helping the millions of farmers in India, but is also playing an important role in sectors like Power, Travel &Tourism, Aviation, Railways and Disaster management.

Dr M. Ravichandran, Secretary, Ministry of Earth Sciences, in his address said that IMD has augmented its specialized services for important sectors like power, railway, tourism, health, urban energy, environment etc. aiming to contribute for national economic development. He said, steps are being taken for joint collaborative approach by IMD, MoES and Ministry of Panchayati Raj to extend our outreach to Gram Panchayats and villages.

MrRavichandransaid, IMD should efficiently utilize all resources at its command i.e. satellites, radars, computers, advance models and of course human resource and assured that the Government will provide all requisite support to capacitate the Department in better delivery of services enabling a common man to take weather-wise decisions.

DrMrutyunjayMohapatra, Director General of Meteorology(IMD) said in his welcome address that IMD has initiated adequate measures like installing Doppler Radars in hilly areas of Western Himalayas and major cities like Delhi, Mumbai, and Chennai. He also promised to put up such radars in other cities and North Eastern States during next 5 years. 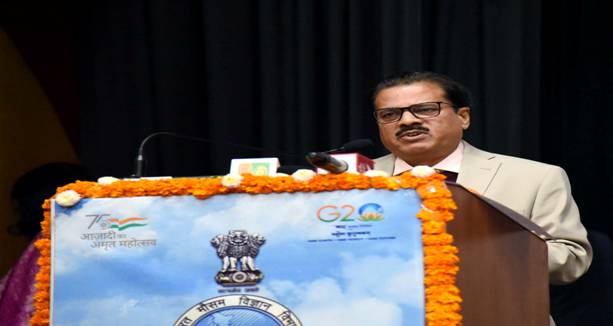 Dr Mohapatra recalled that the Urban flood warning system introduced for Mumbai in July 2020 which has helped in better management of heavy rainfall events and floods over Mumbai. Similar system has also been implemented in Chennai and being extended to Kolkata, Guwahati and Delhi in coming years as the flash floods and urban floods in recent years have posed new threats to the society, he added.

IMD has the legacy of maintaining weather and climate records and is monitoring & predicting the weather since its inception 148 years ago on 15 January, 1875 in the background of tropical cyclone hitting Calcutta in 1864, and the subsequent famines in 1866 and 1871 due to the failure of the monsoon.  During 148 years of its existence, the department has served the cause of safety and wellbeing of Indian population against weather related hazards and helped in the economic development of the country. It is one of the few departments of the government whose services touch almost every aspect of life and across all sectors of economy.