In his welcome address to the top-20 rankers and their family members, Dr Jitendra Singh described the 2021 batch of Civil Servants as the “Architects of Century India”. He said, when India is celebrating Azadi Ka Amrit Mahotsav coinciding with 75th Year of India’s Independence, this Century Batch with 25 to 30 years of active service ahead will charter a new course when independent India turns 100.

The Minister said, onus will be on them to become active partner in realising Prime Minister Narendra Modi’s vision of New India that leads the rest of the world. He said, under Prime Minister Modi, India is already on the ascent and Civil Servants of this new genre have the privileged responsibility of taking it to the top league in the global arena.

During introduction of the 20 toppers, Dr Jitendra Singh pleasantly noted that there are 10 engineers and two medicos among them and hoped that they will add value to the work assigned to them in carrying out various specialized schemes and programmes introduced by the Modi Government in the last 8 years. The Minister hoped that the technocrats will be able to do justice to the highly specialised flagship programmes of the government in sectors like Health, Agriculture, Water, Environment, Industries, Education, Skills and Mobility to name a few.

Dr Jitendra Singh also pointed out that apart from the first three toppers in Civil Services Exam-2021, there are 8 female candidates out of 20 toppers, which is nearly 40 percent and asserted that we are closely arriving at gender parity. The Minister also took note of the demographic change happening over the last few years and said that they represent a pan-India coverage as these candidates hail from the States/UTs of Bihar, Uttar Pradesh, Punjab, Delhi, Haryana, Maharashtra, Kerala, Madhya Pradesh, Rajasthan and Telangana. He said, this gender and demographic change augurs well for a diverse country like India. 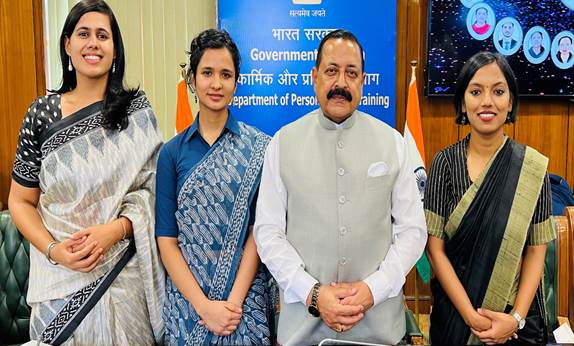 The Minister also underlined that even candidates having done schooling from Kendriya Vidyalaya, Navodaya School and Government schools are cracking the exam, while earlier it was mostly confined to elite schools.

Dr Jitendra Singh said after he joined the government in 2014, he had introduced in the DoPT a new tradition of personally inviting the All India Toppers to North Block and felicitating them and since then this tradition continues.

Responding to some of the suggestions of toppers that India language students face difficulties and challenges in taking up the exam, Dr Jitendra Singh said that Indian Government is committed to promote Indian languages and efforts are on to translate the engineering and medical books in Indian Languages through professionals. He also reminded the officers that National Education Policy, NEP-2020 will also address some of the challenges.

The Minister also informed that The National Recruitment Agency (NRA) under DoPT is gearing up to conduct computer-based online Common Eligibility Test (CET) for recruitment to Non-Gazetted posts by the year end. He added that to begin with, the test will be conducted in 12 Languages and gradually it will include all the languages mentioned in the 8th Schedule of the Constitution. 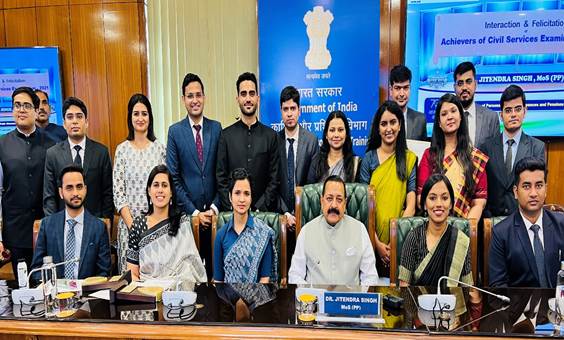 Dr Jitendra Singh also recalled some of the path breaking reforms brought in for the young probationers and IAS officers during the last seven years. These, he said, included introduction of a 3 month stint of mentorship at the Central government before giving over to the respective State or Union Territory to join the allocated cadre.

Dr Jitendra Singh in conclusion said that interacting with the successful candidates is always a learning experience for future course corrections. He wished that in their great career ahead full of diverse opportunities and challenges, they would be able to give their best to the country. The programme was attended by all the senior officers of the department.

Nitin Gadkari inaugurates and lays foundation stones of 15 National Highway projects in Bihar with a total cost of Rs.13,585 crore

Renewal of Memorandum of Understanding between Department of Biotechnology, Ministry of Science & Technology, Government of India, and Bill & Melinda Gates Foundation for Grand Challenges India partnership to accelerate research and innovation for global health needs