Dr. Jitendra Singh also said that this is the historic day for Kathua as the name of Kathua is now listed among those developed regions of India where biotech parks have been established, attracting innovations and research not only from the country but from the whole world.

The Minister said that the next twenty five years are very crucial for this country and when India would be celebrating its 100 years of independence in 2047, the youth of Kathua would be among the great contributors towards making India a ‘Vishwa Guru’.

Dr. Jitendra Singh said that under PM Narendra Modi without any regional bias, the UT of Jammu and Kashmir has seen a new dawn of development in education, health infrastructure, science and technology. The establishment of AIIMS, IIM, IIT, IIMC, Space Centre at Central University of Jammu, Highway villages, Express Corridor, Atal Setu, Mega-Quintal Seed Processing Plants, Medical Colleges some of which have been established in Kathua are some of the national level development projects J&K has seen in last eight years.

Dr Jitendra Singh said, the Biotech Park would act as hub for incubation of new ideas and will act as a robust platform to support the Agri-entrepreneurs, Startups, Progressive farmers, scientists, scholars and students not only from Jammu & Kashmir and Ladakh but also from nearby States of Punjab, Haryana and Himachal Pradesh.

Dr. Jitendra Singh said that the biotechnology park at Kathua has a potential to produce 25 startups in a year which will be among its great contributions to this region. Dr. Singh informed that with the unlocking of space technology in India under PM Narendra Modi, sixty startups have been established in only one and a half year, Onkar Singh, the young scientist from Jammu present today here is among the best examples of it. 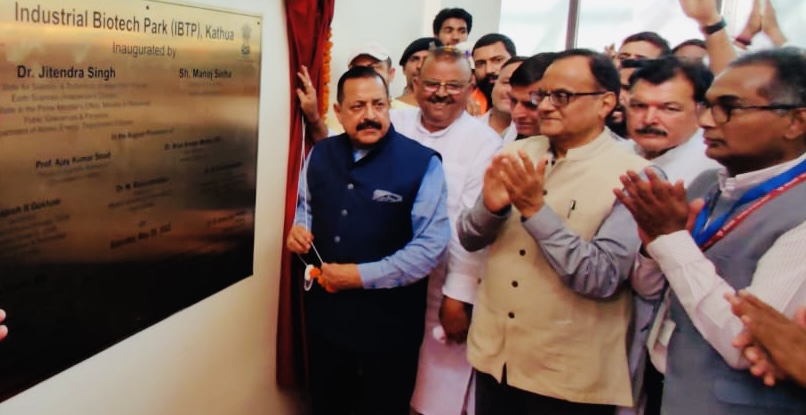 Dr. Jitendra Singh also said that the need is to change the erstwhile government job mindset first among the elders and then youth when the government has created greatest avenues for youth in the name of lucrative start-ups under ‘Start-Up India, Stand-Up India’.

Dr. Jitendra also said that the Startup revolution has now started in J&K, the start-ups under Aroma Mission being the best starting points under it, creating household names in India like Bharat Bhushan, the brand ambassador of Aroma Mission in India who not only doubled but quadrupled his income only in few years.

The Minister emphasised that the StartUps must be sustainable and connected to the livelihood which is the actual mantra of this government creating greater employment opportunities under StartUps. The ‘Botlabs’ is the best example of a sustainable startup connected to livelihood which flew 1000 drones during the beating retreat ceremony and are now earning in millions for sponsoring the drone shows in the country, Dr. Singh added.

Dr. Jitendra also said that the media has a greater role to play in the awareness campaigns regarding startups and must show the success stories on it to inspire people. He also said that a single National portal will be started catering to the interests of youth who have a potential in certain field and want to build a startup under it.

Dr.Jitendra Singh informed that Northeast is now the best example of change in India attracting StartUps across the country. J&K too has a potential to become the prime destination for start-ups with resources diversity, Dr. Singh added.

Dr. Jitendra Singh also said that the work on the two Industrial Biotech Parks, one at Ghatti, Kathua, Jammu and other in Handwara, Kashmir jointly funded by department of Biotechnology, Govt. of India, Ministry of Science & Technology and Jammu & Kashmir Science, Technology & Innovation Council was started in February 2019. CSIR-Indian Institute of Integrative Medicine, (CSIR-IIIM) Jammu has been entrusted with the responsibility of implementation of this project.

Dr Jitendra Singh said, this biotech park will carry out research on biodiversity, medicinal and aromatic plants of Jammu and Kashmir and Ladakh, and it will also promote green category businesses. The Biotechnology has made significant impact on the socio-economic developments worldwide with contributions in various sectors of biotechnology such as health care, agriculture, process industry, environment and service sectors. The Indian biotechnology industry is one of the fastest growing knowledge based economies and is expected to play a vital role in shaping India’s economy. India is uniquely positioned to harness the immense potential that biotechnology offers for transforming all aspects of life globally. The Indian biotech industry is among the top 12 destinations in the world and ranks second in Asia after China.

The Government of India through the Department of Biotechnology, Ministry of Science and Technology, has taken a number of initiatives to accelerate the growth of biotechnology by promoting development of innovative technologies, infrastructure, human resources and industry, which has helped the sector to gain global visibility.

Prime Minister to interact with beneficiaries of government schemes on 31st May, 2022 at Shimla, Himachal Pradesh