The Minister also, at the same time, inaugurated a 4-day International Conference on Food and Nutritional Security 2023: – iFANS.

Speaking on the occasion, Dr Jitendra Singh said that Agri-tech StartUp has an exclusive potential in India and the concept needs more awareness by all the stakeholders in the country to become a success. He said that due to a push from Prime Minister Narendra Modi, the StartUp movement has picked up momentum in India and led to creation of over 80,000 StartUps whose number was only about 350 before 2014.

The Minister said, this quantum jump in the number of StartUps must equally and proportionally reflect in Agri and Bio-tech as well because this area is yet to be fully explored and taken advantage of by Indian entrepreneurs and youth. He insisted on creating awareness about lucrative livelihood and income avenues in Agri-tech entrepreneurship.

“National Genome Editing & Training Centre” (NGETC) inaugurated today is a one-roof state-of-the-art facility that will serve as a national platform to cater to the regional needs to adapt different genome editing methods, including CRISPR-Cas mediated genome modification. It will also empower young researchers by providing them with training and guidance about its know-how and application in crops. In the current climatic scenario, improving crops for better nutrition and tolerance to the changing environmental condition is a significant challenge. Genome editing could be a promising technology that Indian research could adapt to offer the desired tailor-made traits in crops. NABI has shown ability and can expand the genome editing tools to vast arrays of crops, including Banana, Rice, Wheat, Tomato, Maize and Millets.

The International Conference on Food and Nutritional Security (iFANS-2023) will be jointly organized by the National Agri-Food Biotechnology Institute (NABI), Centre for Innovative and Applied Bioprocessing (CIAB), National Institute of Plant Biotechnology (NIPB), and International Centre for Genetic Engineering and Biotechnology (ICGEB) at NABI, Mohali. The 4-day conference will brainstorm how genome editing could enhance the country’s food and nutritional security under changing climate in the country. The conference will have multiple sessions with as many speakers from 15 different countries. They will share their experience through their contribution to plant sciences in the frontier areas of their research. The conference will bring on new challenges and new ideas and will also work as a stage for fostering new research collaborations between laboratories in different countries.

The conference envisages bringing together international experts and young researchers in the areas of agriculture, food, and nutrition biotechnology, and genome editing. The theme of the conference is pertinent to inspire young students and researchers considering the fact that food and nutrition security is a global demand. Advanced biotechnology tool such as genome editing using CRISPR-Cas9 has potential to achieve these goals in a sustainable manner. More than 500 participants from various parts of the country have registered for this conference. In addition, 80 speakers (40 international and 40 national) will be sharing their scientific knowledge during these four days. 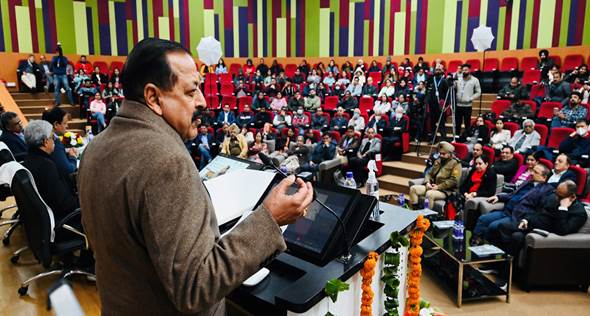 NABI, under the Department of Biotechnology, is a national institute with a mandate focusing on research activities at the interface of Agriculture, Food and nutritional biotechnology. Genome editing is a crucial tool to cause site-specific gene mutations/changes so that important crop traits can be developed. These mutations have the potential to mimic nature-like mutations and could be target specific in the genome. In the current climatic scenario, improving crops for better nutrition and tolerance to the changing environmental condition is a significant challenge. Genome editing could be a promising technology that Indian research could adapt to offer the desired tailor-made traits in crops. NABI has shown the ability to utilise genome editing tools and can expand the genome editing tools to vast arrays of crops, including Banana, rice, wheat, tomato and millet.