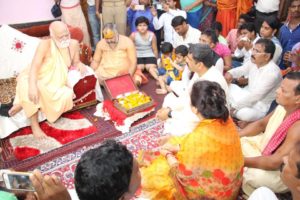 The Modi Government had begun work for employment of youths, self-employment and to live with dignity three years back. The Prime Minister has given him responsibility of the Skill Development Ministry and he has come to surrender himself before the Lord. Without Lord Jagannath’s grace, it would be impossible to shoulder such a huge responsibility successfully, Pradhan said.