New Delhi : Union Home Minister Shri Amit Shah chaired a meeting with Chief Ministers, Chief Secretaries and Director Generals of Police of all North Eastern States on ‘Drug Trafficking and National Security’ in Guwahati, Assam today. It discussed the drug abuse scenario in the North East region and ways to mitigate it. The meeting was also attended by the Union Home Secretary, Director General of Narcotics Control Bureau (NCB) and other senior officials.

In the meeting, Shri Amit Shah said that the spread of drug smuggling is very fatal for any society. The damage caused by any terrorist incident is limited, but the spread of drugs in the society destroys the generations. Just like a termite it makes the youth power of our society and the country hollow. He said that in the Azadi ka Amrit Mahotsav the Ministry of Home Affairs has strongly resolved to fulfil the Prime Minister Narendra Modi’s vision of ‘Drug-free India’. The Union Home Minister said that the Government of India under the leadership of Prime Minister Narendra Modi has adopted the policy of zero tolerance to thwart every attempt by the ‘Dirty Money’ of drug trafficking and ‘organized mafia’ to damage the country’s economy and national security.

The Union Home Minister said that the Ministry of Home Affairs under the leadership of Prime Minister Shri Narendra Modi is committed to curb the menace of narcotics. About 40 thousand kilograms of narcotic drugs were destroyed across the Northeast today as part of the special operation against drugs. Shri Shah said that under the leadership of Prime Minister Narendra Modi, a target was set to destroy 75 thousand kilograms of drugs during the period of Azadi ka Amrit Mahotsav, but till now a total of more than 1.5 lakh kilograms of drugs have been destroyed which is more than twice the target. 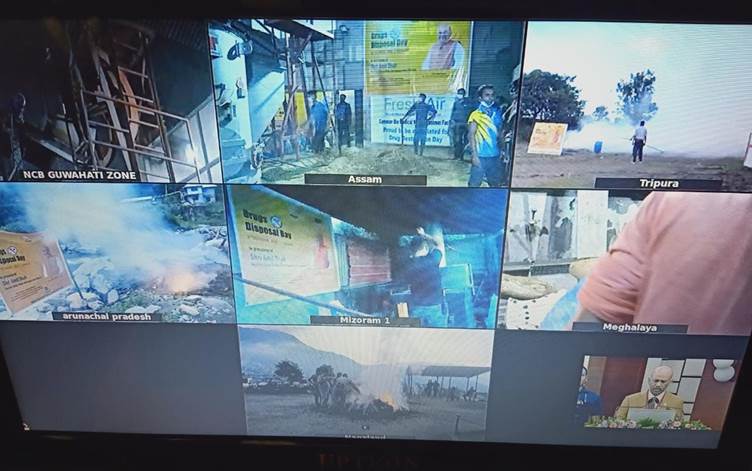 Shri Amit Shah said that drug trafficking is a borderless crime and to tackle it effectively better coordination not only among all drug law enforcement and intelligence agencies but among all the border area districts of all the North- Eastern states  is necessary . He said that over the years, under the firm leadership of the Prime Minister, the Ministry of Home Affairs at the national level has ensured that the Anti-narcotics laws and rules are strictly implemented. At the same time, modern technology should be used in this and coordination should be established among all the agencies. The Union Home Minister said that the success of the strategy to destroy the supply network of narcotics in the country is very much visible in this short span of time. He said that the seizure of narcotics after 2014 has proved it. Shri Shah informed that a total of 1257 cases were registered between 2006-2013 which increased by 152 percent to 3172 between 2014-2022. The total number of arrests during the same period increased by 260 percent to 4888 as against 1362. During 2006-2013, 1.52 lakh kg of drugs were seized which doubled to 3.30 lakh kg between 2014-2022. Drugs worth Rs 768 crore were seized during 2006-2013, which increased by 25 times to Rs 20,000 crore between 2014-2022.

The Union Home Minister said that the main objective of this regional conference organized in the Northeast is to put the seriousness of the Government of India towards this subject in front of the North Eastern states. Also we have to bring a synergy by bringing the states together in this fight, bringing all the agencies related to narcotics on one platform and giving a message at the national level that now the country has made up its mind to go to the root of this problem and solve it. Shri Shah said that he clearly believes that a drug or drug abuser is not a criminal but a victim of it. Union Home Minister said that we have to go beyond catching the ‘faces’ like drug abusers and distributors involved in any seizure and try to nab the masterminds who send drugs from outside the border to India. Along with this, the spread of drug network within the country will have to be demolished. He said that our prime focus should be on preventing network and cross-border smuggling.

Shri Amit Shah said that the North Eastern region of the country shares international borders with four countries and the region is close to Myanmar which is the second largest producer of opium in the world after Afghanistan. He said that drug consumption in Northeast India is a serious problem. According to the Magnitude of Substance Report, 2019 published by the Ministry of Social Justice and Empowerment, the consumption of opium and ganja in seven northeastern states is at an alarming level, which is higher than the average of their consumption in the country. The Union Home Minister said that some new trends have come to the fore in the Northeast. Drug syndicates exploit bank accounts and postal addresses belonging to North East India. Myanmar citizens have bank accounts in some Indian banks in Manipur. Drug smugglers from the Northeast are also in collusion with Nigerians. Suspected involvement of South Indians living in the North East in drug smuggling has also been observed.

The Union Home Minister said that on the directions of Prime Minister Narendra Modi, the Ministry of Home Affairs has adopted the three-pronged formula of strengthening the institutional structure, empowerment and coordination of all narco-agencies and a comprehensive awareness campaign to tackle Narcotics. He said that earlier due to the lackadaisical attitude of the institutions working at various levels in the anti-drugs campaign and lack of flexibility in implementation of laws, the expected results were not yielding. But the situation has changed since 2014, due to Prime Minister Narendra Modi’s emphasis on strengthening the system and accountability, the Ministry of Home Affairs has made continuous efforts to strengthen the institutional restructuring and legal provisions for narcotics as well. To make the government’s performance effective, the Modi government has given continuous emphasis on inter-departmental coordination under the ‘Whole of Government Approach’. The Union Home Minister urged the Chief Ministers of all the North Eastern States present in the meeting to hold the Encord meetings regularly as well as to take it down to the bottom. He said that the investigation of drugs related cases should be done from source to destination so that its entire network can be destroyed.

Shri Amit Shah said that the government has taken many new initiatives for the North Eastern states. Regional Office of NCB has been set up in Guwahati. In the coming years, NCB will work in four regions namely Assam,Manipur, Arunachal Pradesh and Tripura.Proposals are being made to make New Regional Offices  at Agartala in Tripura and Pasighat/LowerSiang in Arunachal Pradesh. In addition, Zonal Offices is also being proposed at New Jalpaiguri for better coverage of the adjoining Sikkim areas.

The Union Home Minister informed that several measures have been taken against the illegal cultivation of ganja and opium poppy in the North Eastern region as well as in other parts of the country. The Ministry of Home Affairs is setting up a study group to eradicate illegal farming in hilly and difficult areas using drones and latest technology on a large scale without causing any harm to the farmers. An inter-ministerial committee has been constituted on alternative livelihood arrangements for farmers engaged in cultivation of illegal crops. Simultaneously NCB is sharing satellite imagery to eradicate illegal opium poppy cultivation in the North Eastern region. Shri Shah said that all North Eastern States have constituted Anti-Narcotics Task Force (ANTF) as a single nodal point for all issues related to Narcotics. The NCB has also conducted several special drives on enforcement activities across the country including in the North-East region, which include identification and detention of top 100 drug traffickers.

President of India,  Droupadi Murmu greets on the eve of Milad-un-Nabi