New Delhi :Union Home & Cooperation Minister  Amit Shah, chaired the 25th meeting of the Western Zonal Council at Diu today. Chief Ministers of Goa, Gujarat and Administrator of Dadra & Nagar Haveli and Daman & Diu, Senior Ministers from Gujarat and Maharashtra, Union Home Secretary, Chief Secretaries from the member States in the Western Zone, Secretary, Inter State Council Secretariat and other senior officers from the States and Central Ministries and Departments participated in the meeting. It is for the first time that the Western Zonal Council was held in the UT of Dadra & Nagar Haveli and Daman & Diu.

Highlighting the importance of Zonal Councils that were established under the States Reorganisation Act in 1956, Union Home Minister & Cooperation Minister referred to the Vision of the Prime Minister, Shri Narendra Modi to leverage cooperative and competitive federalism to achieve all round growth of the country. He mentioned that the Zonal Councils provide the platform to foster such collaboration through a structured mechanism for dialogue and discussion on a continuous basis on the issues affecting one or more States or between the Centre and the States, in the spirit that strong States make a strong nation. In this context, he also highlighted that under Prime Minister Narendra Modi’s guidance, the country has been successfully dealing with Covid-19 pandemic along with ensuring extensive vaccination in the country which has been possible with the active support of the States. 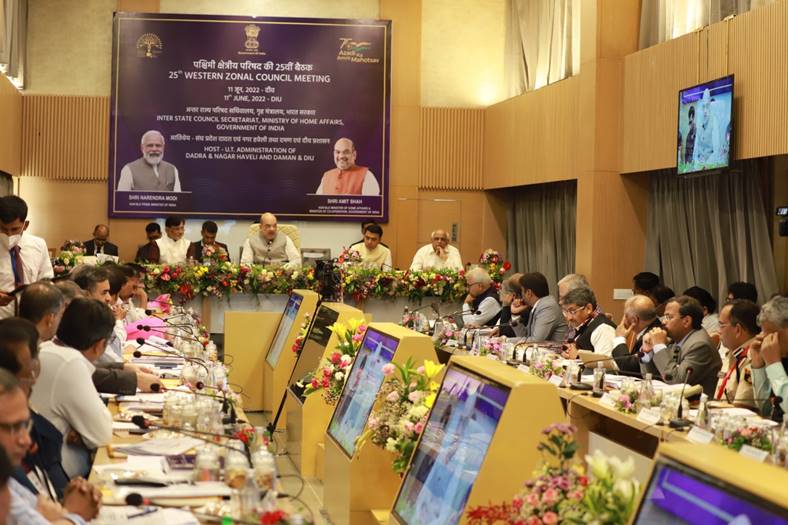 The Western Zonal Council in the 25th meeting at Diu on 11.6.2022 and its Standing Committee in its 12th meeting at Panaji on 28.01.2022 has discussed over a total of 36 issues.  Out of these, 6 issues have been identified as significant at national level and these issues are being discussed and monitored regularly on an ongoing basis in all meetings of different Zonal Councils. These are improvement of banking services in rural areas, monitoring of rape and sexual offences cases against women and children, implementation of Fast Track Courts for such cases, verification of identity of Marine fishermen in high seas, development of local contingency plan by coastal States for Mass Rescue Operation in high seas and encouragement of Make in India initiative through Preference in Public Procurement.   Out of the 30 other issues that were discussed in these meetings, 27 issues were resolved and only 3 retained for further deliberation.

The Union Home & Cooperation Minister, Shri Amit Shah stressed the need for early investigation of rape/sexual offences against women & children and the need for stringent punishment in a time bound manner.  He desired that an Addl. DGP level officer, preferably a lady Officer be assigned the responsibility in the Police Headquarters of each State for monitoring all such cases.

The Western Zonal Council also reviewed the action taken on the decisions in its last meeting.  Union Home & Cooperation Minister Shri Amit Shah while noting with satisfaction the substantial progress on the issue of QR Code enabled PVC Aadhar Cards to marine fishermen, he urged the coastal States to make efforts to ensure that 100% of the fishermen including migrant and seasonal fishermen going to the high seas should have such Aadhaar cards that can be easily verified.

Highlighting the need for all-inclusive Local Contingency Plan and the role it plays in the Mass Rescue Operation, he advised to identify the existing infrastructure along the coast and integrate them with the Disaster Mitigation Plans.

The Zonal Council also appreciated that in pursuance of the Vision given by the  Prime Minister Shri Narendra Modi for expansion of banking network in the rural areas, the Department of Posts will be rolling out additional 20,715 India Post Payment Bank live touch points which will provide banking facilities apart from regular postal services.  Union Home Minister and Cooperation Minister Shri Amit Shah advised that banks including cooperative banks and the India Post Payments Bank should take up the challenge and ensure that each of the remaining unbanked villages of the Western Zone are provided banking facilities within 5 kms in the next year.

Stressing the importance of DBT in ensuring that the benefits of Social Security Schemes reach the targeted beneficiaries, Hon’ble Minister advised that the States should onboard all the State schemes, besides the Centrally Sponsored Schemes on the DBT platform. He desired that all villages in the Western zone be provided mobile connectivity within one year for which private sector players be also roped in.

Union Home & Cooperation Minister also advised that the cash deposit facility through Common Service Centres be got extended in a time bound manner and all banks be onboarded on the platform.  He advised that this should be reviewed quarterly in a focussed manner.

The Council in the meeting at Diu also resolved the issue of rate of tariff for water supplied to the UT of DNH & DD by the Gujarat Water Supply and Sewerage Board. Further, the deliberations provided a meeting ground between the Railways and the Government of Maharashtra on the issue of pending Forest and Wildlife clearances for the two important ongoing railway projects for gauge conversion on the Akola-Khandwa Section and the new 3rd line Project of the Bortalao-Gondia section.

The Zonal Council also appreciated that on the initiative of its Standing Committee, MoEF&CC had incorporated a window in its Parivesh Portal for uploading notifications of Non-Forest land identified for raising Compensatory Afforestation as Reserved Forests/Protected Forests.