Union Home and Cooperation Minister  Amit Shah inaugurated and laid foundation stone of 21 development projects worth about Rs 1,311 crore today at Moirang, Manipur. These include Churachandpur Medical College built at a cost of Rs 46 crore, Marjing Polo Statue built at a cost of Rs 39 crore, Manipur Olympian Park at Sangaithel, Manipur Exhibition Center in Imphal-East, District Youth Skilling and Employment Centres, Fruit Preservation Factory, Neelakuthi in five districts of the state. Shri Amit Shah also unveiled the 165-feet tall tricolor at the historic ‘Azad Hind Fauj’ Headquarters at Moirang, which is the tallest national flag in the entire North East region. On this occasion, the Chief Minister of Manipur, Shri N. Biren Singh and many other dignitaries were present.

In his address, Shri Amit Shah said that under the leadership of Prime Minister Narendra Modi and Chief Minister N. Biren Singh, Manipur is marching ahead on the path of development, peace and prosperity and is now completely free from terrorism, bandh and blockade and as a result, the foundation stone of 29 projects worth Rs. 2450 crore was laid on 6th January, last year and today, 21 projects worth over Rs 1,300 crore have been inaugurated and foundation stone laid. 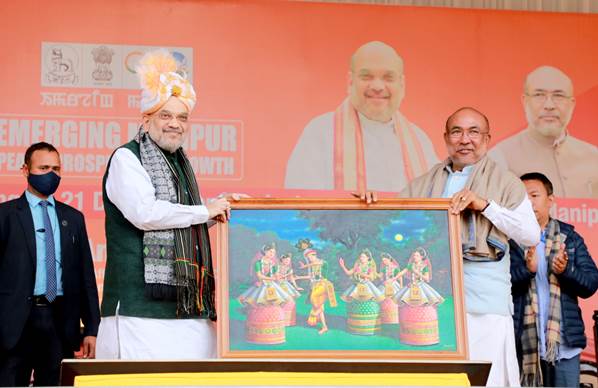 The Union Home Minister paid homage to the highly knowledgeable and talented King Shri Bhagya Chandra, Queen Mother, Maharaja Kulachandra and Pukhotinthang and said that Manipur has a glorious history of over 3000 years. He said that the people of Manipur helped Maharaja Kulachandra to free Manipur from the clutches of the British by giving full cooperation against the British. To make the country aware of this glorious history of Manipur, the government has renamed Mount Harriet, where Maharaja Kulachandra’s general secretary, the crown prince and 22 freedom fighters were imprisoned, to Mount Manipur. Shri Shah said that the tallest flag of the Northeast was hoisted today at Moirang in Manipur, the first place on India’s mainland to gain independence. 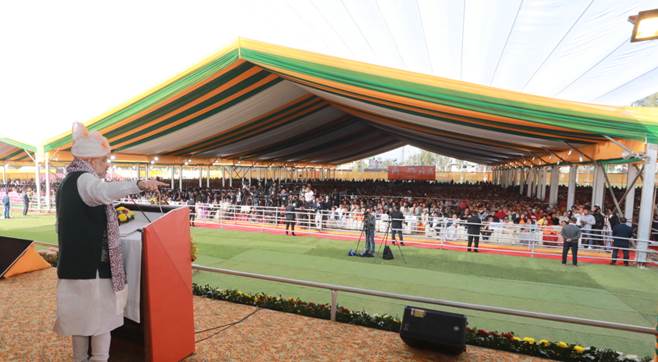 The Union Home and Cooperation Minister said that under the leadership of great freedom fighter Subhash Chandra Bose, ‘Azad Hind Fauj’ fought against the British and freed Manipur from the clutches of the British. He said that the Manipur government has built a memorial for the martyrs of ‘Azad Hind Fauj’ by doing the restoration work of the houses destroyed during the shelling by British, and this memorial will not only inspire the youth of Manipur to devote their lives for the nation, but also help to develop this place into a big tourist spot.

Shri Amit Shah said, over 100 children are studying medical science in the Churachandpur Medical College built at a cost of about Rs. 46 crores. He added that earlier children from Northeast had to go to bigger cities like Bengaluru, Delhi, Mumbai and Ahmedabad to study, but now children from various states of India are studying in Moirang, which is a great achievement. He said, a 122-feet tall Marjing Polo statue has been inaugurated in Manipur and Manipur Central University and Manipur University, should do research to tell the whole world that it is Manipur which has gifted the sports of Polo to the world. Shri Shah said that this place will become a centre of attraction for Polo enthusiasts from across the world.

The Union Home Minister said that Prime Minister Narendra Modi has visited the region of Northeast 51 times in the past 8 years and his sensitive approach and hard work has made the Northeast realize that the whole of India is proud of them. He said that under the leadership of the Prime Minister Narendra Modi, North East’s connectivity with the rest of the country has been improved by enhancing road, rail and air connectivity. He added that in the last 8 years, the Government of India under the leadership of Prime Minister Narendra Modi, has invested more than Rs 3.45 lakh crore to take North East away from militancy, infiltration, bandh, drugs, arms trafficking, corruption and caste conflicts towards development, connectivity, infrastructure, sports, investment and making it into a hub of organic agriculture. Shri Shah said that Prime Minister Narendra Modi, has not only connected the North East region with railways and air routes has connected the Northeast but also with the heart of the whole country. Shri Shah said that in 2019, the government signed the Bodo Accord, NLFT Accord, Karbi-Anglong Accord, Bru Accord and freed the entire Northeast from militancy. At the same time, the government ended militancy and removed the AFSPA from 6 districts of Manipur, as a result of this, Manipur which was earlier suffering from blockades, is now marching forward towards development and self-reliance.

The Union Home and Cooperation Minister said that instead of Look-East policy, Prime Minister Narendra Modi adopted Act-East policy, due to which Manipur has become a symbol of hope and stability. He said that the country’s first Sports University, spread over 325 acres at a tune of Rs 816 crore is being built in Manipur to help it emerge as a sports hub. The Olympian Park built by the Chief Minister Shri N. Biren Singh will also be a source of inspiration for the youth.

Shri Amit Shah said that 31 tribal museums are being developed in hill districts and health expenses up to Rs. 5 lakh have been made free of cost for about 3.63 lakh beneficiaries under the Ayushman Bharat scheme for health development. He said that Ima Market, which works for the empowerment of women, is being set-up at 17 places at a cost of Rs 130 crore. Shri Shah said that 68,000 houses have been provided to people in Manipur under Pradhan Mantri Awas Yojana, while the state government has promoted thousands of startups at a cost of Rs 110 crore. Door-to-door screening of 13 major diseases has been ensured under the Chief Minister’s Health for All scheme. He said that poppy cultivation on about 1,780 acres of land has been destroyed by the Manipur government by identifying it with drones. Shri Shah said that in the year of Azadi ka Amrit Mahotsav, under the leadership of Prime Minister Narendra Modi, the Ministry of Home Affairs, Government of India has taken a pledge of a drugs-free India, so that in the centenary year of independence, India will be completely free from the problem of drugs. He said that the government is determined to make Manipur a drugs-free state by ending opium cultivation in the state and will continue to work towards making Manipur a developed and prosperous state by working in the fields of education, sports and start-ups.

The future of the world economy and humanity rests in the hands of the youth: Anurag Singh Thakur