New Delhi :On occasion of the 8th International Day of Yoga (IDY), Prime Minister Shri Narendra Modi will lead the Yoga Day observation from Mysuru Palace, Mysuru, Karnataka. Hon. PM’s address will be live streamed on DD National and other DD Channels from 6:40 am to 7:00 am. A Digital Yoga Exhibition at Mysuru will be organised to showcase highlights and achievements of all previous editions of International Day of Yoga. The exhibition will also include strength of Yoga, best practice, research highlights, Common Yoga Protocol etc.

In the spirit of Azadi ka Amrit Mahotsav as the country celebrates 75th year of independence, 75 iconic sites have been selected for observation of 8th edition of IDY. Statue of Unity at Kevadia, Gujarat is one of them. Dr. Mansukh Mandaviya, Union Health Minister will lead the yoga celebrations from the Statue of Unity, Kevadia, Gujarat on 21st June 2022.

The International Day of Yoga (IDY) is celebrated on 21st June every year worldwide. This year, the 8th edition of IDY will be organised in India and across the globe on the theme of ‘Yoga for Humanity’ which was announced by Prime Minister of India, Shri Narendra Modi in his Mann Ki Baat address and will focus on ‘Brand India at Global Stage’ while showcasing its iconic places. The IDY observation is based on a harmonious mass yoga demonstration of a custom made 45-minute protocol namely, Common Yoga Protocol (CYP).

This year, the major attraction of the IDY observation will be the ‘Guardian Ring’, whereby the yoga celebrations happening across the world will be relayed throughout the Yoga Day. “The Guardian Ring” underlines “One Sun, One earth” concept and showcases the unifying power of Yoga. The activity will string together the feed from different Missions abroad which will be live telecast on DD India.

Urging all to join in and reap the benefits of Yoga, Prime Minister has shared a series of tweets. In one of his tweets, he said that, in the past few years,Yoga has become quite popular globally. People from all walks of life and professions have incorporated it into their daily routine as Yoga has helped them develop a healthy lifestyle, he noted. Promoting the healthy habit of practicing Yoga regularly, the Union Health Minister Dr Mansukh Mandaviya, in a tweet, stated that in order to avoid illness and receive happiness, it is very important to focus on wellness for which everyone should make yoga a part of their lives. 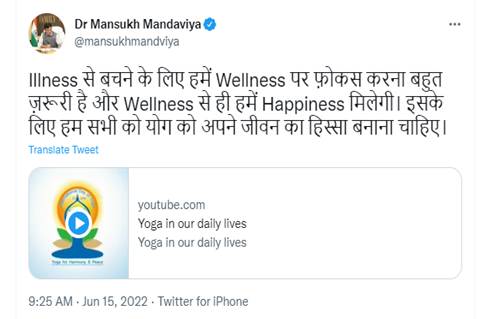 The first International Day of Yoga was celebrated on 21st June 2015. The key purpose behind the United Nations recognising the 21st of June as the IDY was to underline the potential of Yoga in public health globally. The IDY resolution of the United Nations General Assembly (UNGA) in December 2014 came at the initiative of Prime Minister Shri Narendra Modi and was passed by unanimous consent. Since 2015, the IDY has evolved into a mass movement for health, around the world.