The two-day mega Krishi Mahotsav – Exhibition and Training programme concluded in Kota, Rajasthan today in the presence of thousands of farmers, with the Lok Sabha Speaker Shri Om Birla and Union Agriculture and Farmers Welfare Minister Shri Narendra Singh Tomar gracing the occasion.  Expressing happiness in the festival, Shri Om Birla said that today our youth are taking forward agriculture and farming in the country through innovations, while Shri Tomar raised the slogan of advanced agriculture and prosperous farmer in the country and said that the future belongs to the farmers, the only way forward for India is to take the farmers along.

In this Krishi Mahotsav organized by the Union Ministry of Agriculture and Farmers Welfare, Lok Sabha Speaker Shri Birla said that the farmers of Hadoti region are very enthusiastic, who have shown interest in learning and understanding the new technology and adopting modern agriculture.  In order to make farming more profitable, in the festival all the progressive farmers have been encouraged and trained to adopt advanced agricultural production methods, new technology and advanced machinery.  Such events give the right direction to the farmers to adopt agriculture as a profession.  Along with traditional farming, we have to use new technology, new innovations.  With his hard work and innovation, now the farmer’s son will show the world that farming can be a remunerative avenue in the village itself.

Lok Sabha Speaker Shri Birla said that due to the untiring efforts made by the Union Ministry of Agriculture and Farmers Welfare under the leadership of Prime Minister Shri Narendra Modi in the spirit of dedication towards the farmers in the last eight-and-a-half years, the agriculture sector has achieved new highs.  Citing the example of the Kisan Rail being run across the country, Shri Birla said that the government wants to strengthen the farmers financially, if this happens the country will progress further.  He expressed happiness over the participation of farmers in large numbers in the festival.

Union Minister Shri Tomar said that earlier there was a saying that farming belongs to those who have water, but today due to technology, the saying has changed, – today farming belongs to those who have knowledge.  Through such events, production and productivity can be increased by learning and understanding technology and applying it to our farms. The Krishi Mahotsav has been organized for agriculture to be advanced, our farmers to be prosperous and Hadoti’s economy to be strong not on the strength of factories but on the strength of farmers’ hard work.  Shri Tomar said that Prime Minister Shri Narendra Modi had said just after assuming office in the year 2014 that our government is the government of villagers-poor-&-farmers.  In the last 8 years, Prime Minister Shri Modi has left no stone unturned to change the face of the country’s villages, raise the standard of living of the poor and hike the income of the farmers, as well as hoist the Indian flag high on the political stage of the world.

Shri Tomar said that PM Modi brought cooking gas connections to the homes of the poor under the Ujjwala Yojana, farmers are being given Rs.6,000 each under the PM Kisan Samman Nidhi and already Rs. 2.24 lakh crore has been dispensed under the scheme; not even a single rupee was misappropriated, the total Rs. 6,000 is being directly deposited in the bank account of the farmers.  There is neither any middleman nor any broker in this.  When Prime Minister Shri Modi gave a speech from the Red Fort on August 15 for the first time, he had said that Jan Dhan accounts of the poor should be opened in banks, at that time critics slammed it, but today every Indian should feel proud that all these poor people have bank accounts. Total deposits under these Jan-Dhan accounts today have touched Rs. 1.46 lakh crore, which is an indication of the strength of the country’s poor.

Union Agriculture Minister Shri Tomar said that 10,000 new FPOs worth Rs 6,865 crore have been set up to increase the income of farmers while Rs 11,000 crore has been earmarked to reduce the dependence on the import of edible oils.  The National Edible Oil Mission-Palm Oil has been implemented. Farmers have been facilitated by getting loan of crores of rupees from KCC. The Agri Infra Fund worth Rs. 1 lakh crore has also been created to increase the facilities for the farmers.  Similarly, the Rs. 50,000 crore package  for works related to agriculture like animal husbandry, fisheries, herbal farming and small processing units is changing the face of the economy and the agricultural landscape.  It is very important to retain the new generation in farming and for this it is necessary to make full use of knowledge in farming.  Lauding the farmers of Rajasthan, Shri Tomar said today they have cultivated dates in the sand in such a way that is being applauded the world over.

Legislators, other public representatives and senior officials of the Central and State Governments, Indian Council of Agricultural Research, Agricultural Research Institutes, Agricultural Universities, Scientists of Zonal Agricultural Centers, Agriculture Department officials along with thousands of farmers, Startup workers, extension workers and representatives of private agricultural institutions were present in the programme.  In the exhibition stalls, information was shared with the farmers about the schemes being run by the Central and State Governments.  Stalls related to the supply of agricultural inputs and stalls of 75 startups were also set up, which were keenly visited by a large number of farmers.  Training was given on the topics of agriculture, horticulture and animal husbandry during the fair. 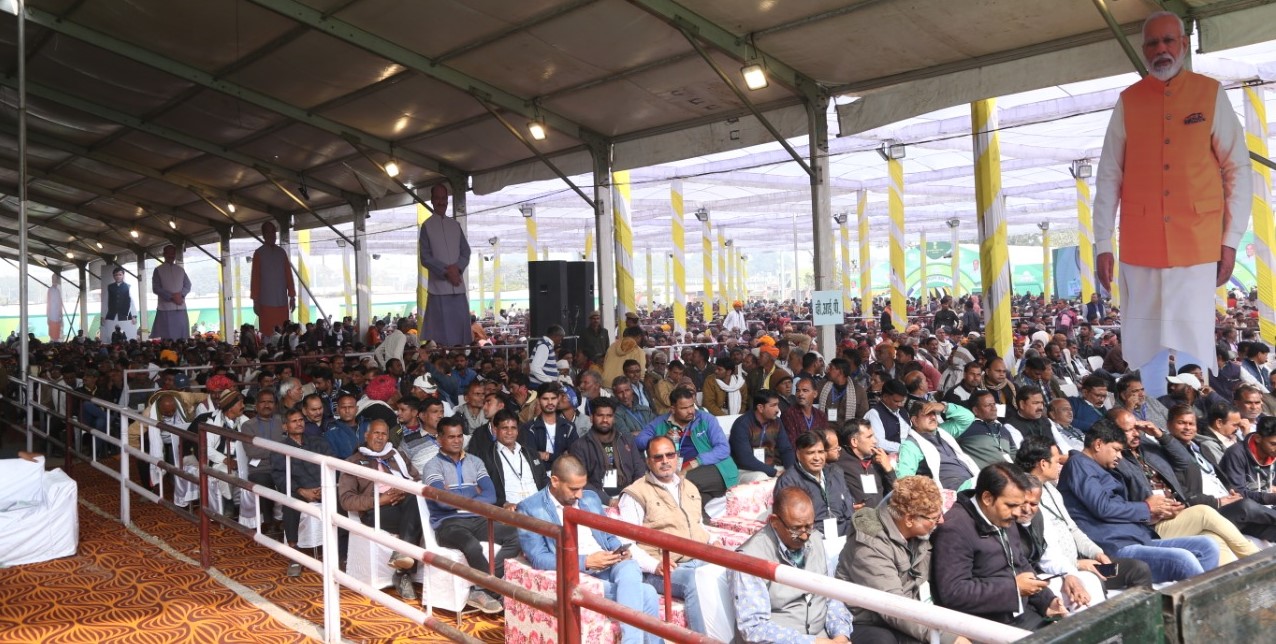