Report by Malaya Mohapatra; Keonjhar: Veteran Congress Leader Niranjan Pattnaik had started his political journey as MLA from Ghasipura and he has been contesting in the elections since then. He has won this seat for 4 terms and remained a powerful minister for 3 consecutive terms during the Congress period. After Badri Narayan Patra, a college lecturer quit his job and vowed to oust niranjan from his constituency, it has been a traditional fight between these two leaders. Badri Narayan Patra has defeated Niranjan three times and remained in the BJD Govt serving two terms as powerful minister. 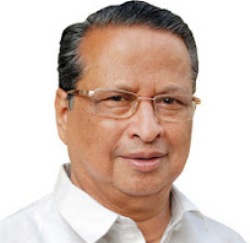 This time inspite of 7 contesting candidates, the main fight is between the heavy weight leader of BJD and Congress. Pritviraj kuanr, the ex congress candidate had joined BJP and is now the BJP official candidate. But putting a strong fight with either Niranjan or Badri is not to be seen in this constituency. Niranjan Pattnaik after assuming office as the PCC, Odisha has been unable to keep close touch with his constituency. This time also he is contesting from two constituency, Bhandaripokhori and ghasipura for which he is unable to concentrate on Ghasipura alone. In every election Ghasipura has witnessed many incidence of violence and this time it has begun with the murder of ex-congress leader, Rama Chandra Behera who was also an independent candidate in 2014.

It was alleged that the culprits were supporters of BJD and the political blaming continues against each other concerning this issue. BN patra sons who are also in active politics are steering the campaign in favour of their father. Patra on the other hand has been in constant touch with his voters which puts him in an advantageous side. He is hoping to win this election at a bigger margin than last time. Besides clashes between political supporters has made this constituency a sensitive one adding to the headache of the District police.

Anandpur assembly seat : The only hope for Congress in Keonjhar