A sea of devotees thronged Bada Danda today to pull the chariots of the trinity. The devotees pulled the three chariots to Gundicha temple amid religious fervour.

The pulling of chariot of Balabhadra began at 2.15 pm today followed by Devi Subhadra’s Darpadalana. Finally, the Nandighosa of Lord Jagannath rolled out for the annual nine-day sojourn to Gundicha temple. 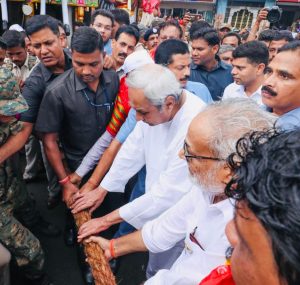 After staying in the chariots on Thursday night, the deities will be taken to Adap Mandap inside Gundicha temple, believed to be the birthplace of the deities, on Friday in ‘Pahandi’.

Earlier in the day, Pahandi ritual began at 8 am and the deities were brought to the chariots. Shankaracharya had darshan of the deities on the chariots. Later, Gajapati Maharaj Dibyasingha Deb performed Cherapahara rituals following which pulling of chariots commenced.