That’s What Made ‘Thoda Thoda Pyaar’ Love Anthem Of The Year !

After the massive success of ‘Thoda Thoda Pyaar’, music composer Nilesh Ahuja is all set to deliver some great pieces of music to his listeners. Having a recent visit to Odisha, Nilesh expresses, “Being here for the first time, I had a great experience in Odisha. People in Odisha are very welcoming and art and culture lovers.”

Nilesh is widely known for songs like ‘Mehendi Lagi’ and ‘Zahir Kare’. These two really did touch the hearts of listeners.

‘Thoda Thoda Pyaar’ became one of the trending songs of 2021 having a huge milestone on YouTube, various playlists, Instagram reels and other social media platforms. “I saw many leading musicians singing and jamming over the song,” says Nilesh. From remote lanes to uptown urban streets, ‘Thoda Thoda Pyaar’ tuned as the love anthem of the year.

Nilesh acquires expertise in various musical instruments like piano, guitar, harmonium, tabla etc. As a musician, Nilesh believes in keeping room for more knowledge and experimentation. “I try to learn and create new with each track or tune I work on,” he shares.

Nilesh’s musical journey started off from childhood. He goes on saying, “When I was in 5th or 6th standard, I used to listen to film songs quite a lot and tried to memorize them too. I later joined a music class. My mother supported me a lot; she bought me my first guitar and enrolled me to a music teacher as well. I used to perform in school a bit. Post that, I got admission in college through music quota. Then I began performing at national institutes like IITs, BITS Pilani and all other state level competitions.” 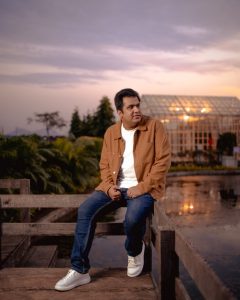 “I did my professional course in music production and sound engineering from Delhi itself. Eventually, I chose music as my career and destiny. Until 2013, I used to record in studios at Delhi. In 2014, I moved to Mumbai to pursue the bigger picture. I got associated with Reliance Jio. Then I did the background score for IPL. I worked with Shubhash Ghai and Anupam Kher extensively. I eventually met and got associated with Kumaar sir. He used to listen and appreciate my compositions. By that time I had worked for quite few ad films. But things took a turn when I made Kumaar ji listen to the tune of ‘Thoda Thoda Pyaar’. He liked it and sent it to Anurag Bedi sir of Zee Music Company. It was instantly approved, tune got finalised and sung by Stebin Ben,” he shares.

Mentioning about his upcoming projects, Nilesh says, “I would say, some good music is coming up. Some singles are work in progress. Those are with some companies as well as with some independent artists. Apart from that, work on some film music are also going on. It is going to take a couple of months or maybe a year, but it is going to happen soon.”

“I have also been planning for 2-3 singles as a singer. I will be featuring myself in the music videos as well. Awaiting for what the future brings,” says as he signs off.

PM Narendra Modi pays last respects to Gen Bipin Rawat, his wife and other personnel of the Armed Forces