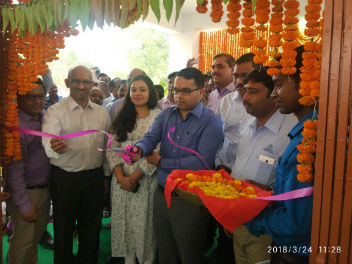 8 schools already handed over, 9 more to be given shortly to the Government of Odisha

The school, along with the furnishings of the classrooms, has been constructed at a cost of nearly Rs 4.5 crore. Built by Jamshedpur Utilities and Services Company (JUSCO), a Tata Steel Group of company, the two-story school building is spread across 24,600 square feet built-up area. It has 14 classrooms, furnished library, computer room, multi-purpose room, laboratories, teachers’ room, staff room, principal’s room, boys and girl’s toilets on each floor, prayer assembly point, etc.

Appreciating Tata Steel for the initiative, Mr Bhardwaj said such good educational infrastructure for Adarsha Vidyalaya in interior places like Bonaihgarh will go a long way in bringing quality education and harness the potential of meritorious students of the area in future.

Speaking on the occasion, Mr Thomas said that Tata Steel is committed to continue its engagement with people of Odisha in education, as well as other sectors, as part of its endeavour to contribute to the state’s inclusive growth story. Including the school at Bonaigarh, the company has already handed over nine such schools to the state government while work is in progress in another 13 schools, which are part of total 30 schools Tata Steel is constructing, he added.

In order to make quality infrastructure available to students in far-flung areas in the state, Tata Steel has signed a Memorandum of Understanding with the Government of Odisha to construct 30 model schools at an estimated cost of Rs 136 crore across the state. This initiative by the steel major is part of the Government of Odisha’s grand plan of setting up Adarsha Vidyalaya (Model Schools) in each block in the state. Earlier 8 model schools at Danagadi, Kamakhyanagar, Nayagarh, Korei, Dasarathpur, Dharmashala, Jajpur and Hatadih blocks, built by Tata Steel, were handed over to the state government. During current academic session, the company will hand over another eight schools while construction work is in progress in five sites and survey has been completed in 8 more sites.